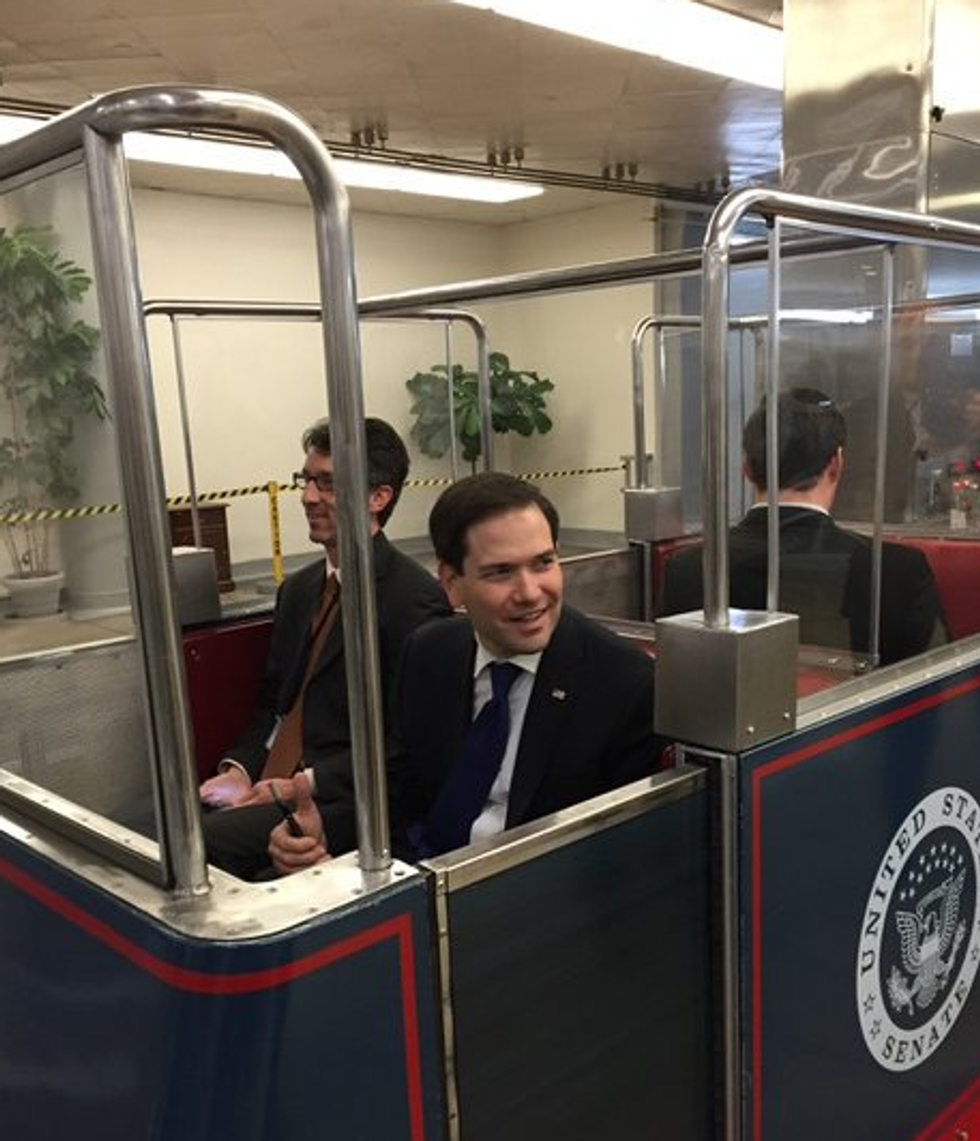 He only likes the Senate because it has all these fun rides, for kids like him.

Remember how for a millionteen years now, Marco Rubio has been like, "When I lose the GOP nomination, I will also leave Senate because I hate Senate and want to ride around in the back seat of the car with my butt in the air crying about how I want a Frosty from Wendy's right now, because I am Little Marco and that is what I like to do?" Remember how he rode the little buggy back to the Senate after he dropped out and was like, "I don't wanna be vice president, I don't wanna be senator, I just want to make Barbie and Ken kiss all day in the Florida sun?"

Ending weeks of political speculation, Marco Rubio announced Wednesday he has changed his mind and will run for re-election to the U.S. Senate, reversing his pledge to return to private life after his presidential campaign collapsed three months ago. [...]

Rubio cited a sense of duty to try to remain in office under either President Donald Trump or President Hillary Clinton — two candidates he considers mediocre.

“No matter who’s elected president, there’s reason to worry. If it’s Hillary Clinton, you know we’re going to have four more years of the same failed economic policies, four more years of the same failed foreign policy,” he told the Miami Herald. “The prospect of a Trump presidency is also worrisome to me in many ways. It’s no secret that I have significant disagreements with Donald.”

[wonkbar]<a href="http://wonkette.com/599175/very-classy-marco-rubio-simply-suggesting-donald-trumps-penis-is-very-small"></a>[/wonkbar]It is absolutely not a secret that Marco Rubio disagrees with Donald Trump, especially on how big Trump's "hands" are. (Trump says they are YOOOGE, Marco says they are the daintiest penis he has ever tasted, allegedly.)

But he was totally coming around! Remember when he was like, "I hate myself and I want a Capri Sun right now, but I guess Trump would be OK for president, as long as it's not Hitlery McGee"? Yeah, well, he has these worries still, and oh god, he has been strucked by The Weight Of The Moment, realizing that a bleeding nation is crying out for his continued service, because here is why:

Rubio reportedly changed his mind ... as the G.O.P. has become increasingly worried that Trump may cause them to lose control of the Senate in November.

He has to save the Senate from President Donald Hillary Rodham Trump! Only Little Marco can do it!

As Vanity Fair reports, Rubio explained the OTHER why to wingnut radio host Hugh Hewitt. It was the Orlando shootings:

I’ve been deeply impacted by it, and I think when it visits your home state, and it impacts a community you know well, it really gives you pause to think a little bit about, you know, your service to your country and where you can be most useful to your country.

[wonkbar]<a href="http://wonkette.com/603211/senate-republicans-vote-to-send-thoughts-and-prayers-to-future-mass-shooting-victims"></a>[/wonkbar]What, he's going to stay in the Senate so he can keep jamming a pencil in the eyes of his state's murder victims, by voting against gun control a whole bunch more? Pardon our French, but go bang a dick with your pointy gay boots, you dumb fuckhole.

[wonkbar]<a href="http://wonkette.com/599778/marco-rubio-finished-doing-things-now-ready-to-catch-some-zzzs-for-rest-of-life"></a>[/wonkbar]So this is great, the other Republicans vying for Rubio's seat (in the electoral way, not the sexxx way) will reportedly step aside so Marco Rubio can be the Marco Rubio that Marco Rubio has always been waiting for, in the Senate.