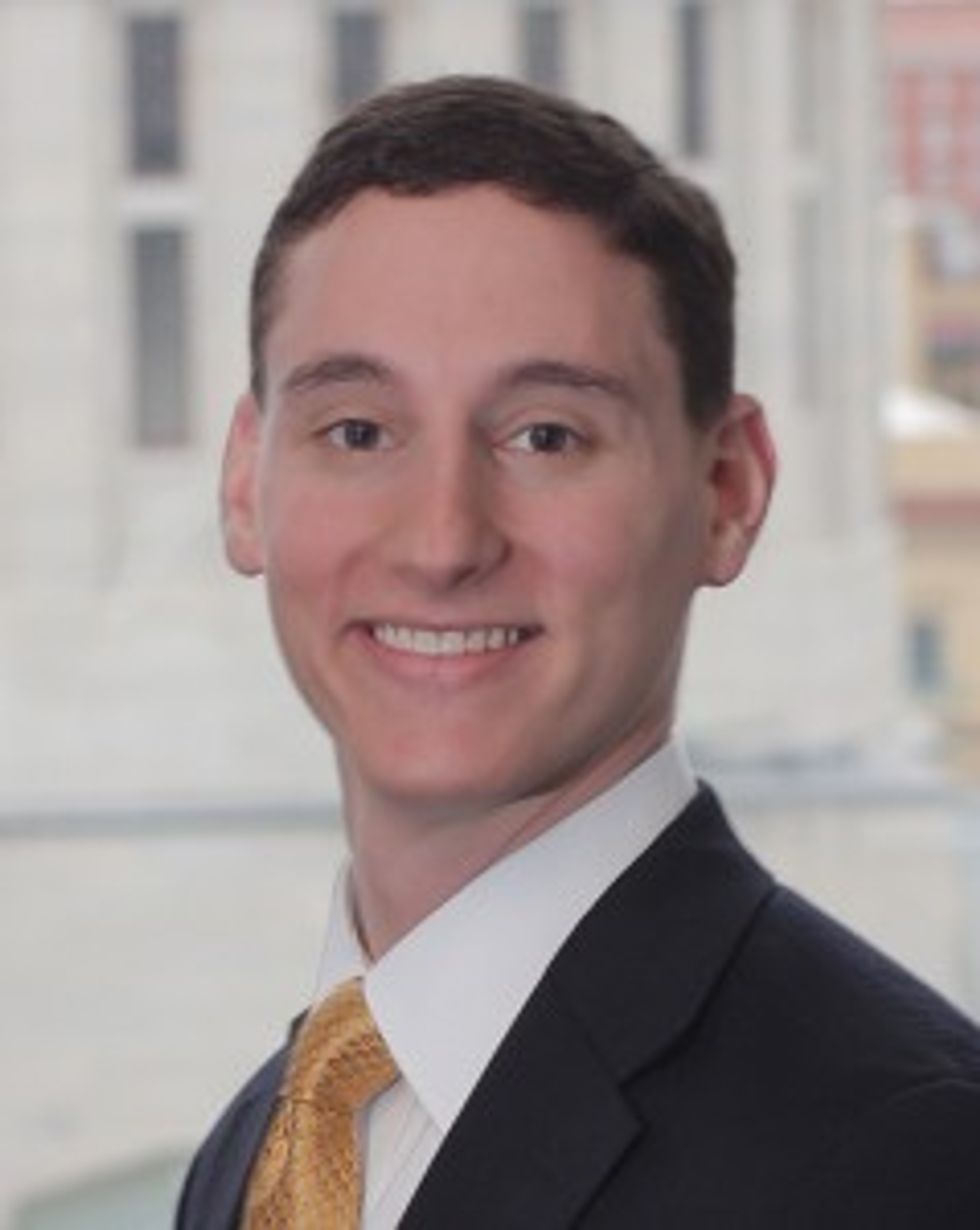 Sorry, sorry, we are 10 minutes late, we had to ... well, we didn't have to do anything actually, except convince ourselves to actually turn on THE SPAN and voluntarily face an hour with walking Clearasil ad/Ohio Treasurer Josh Mandel. Here we go!

7:14 PM -- Oh good it is the surprisingly wee Chuck Todd. We introduced ourselves to him at the Buzzfeed party in Charlotte, and he immediately turned his back and looked for anyone else to talk to! Jim Newell says every person at every party is always like that when you're a Wonket. SADFACE. Josh Mandel is promising only two terms or something, because by then he will be old enough to be the FIRST TEENAGE PRESIDENT! Go Josh!

7:19 PM -- Josh Mandel is talking about reforming tax rates for small business. We saw a fun story today, which we guess we will write about tomorrow maybe, about yet another dude explaining to all his more than 340 employees that he would have to fire everybody if Obama won a second term. Did you know that he too was a "small businessman"? Oh, did we stop listening to Josh Mandel for a while there? Bummer.

7:23 PM -- So Josh Mandel has calmed down a lot, huh? He's not GRANDLY ORATING for his debate club, all "you sir and your scalawag cohort have wrought havoc on our fair sistren and wives!" or whatever.

7:25 PM -- Again with the $716 billion lie. Oooh, and Chuck Todd with the point of personal privilege: what does it actually mean to save Medicare like you claim, Josh Mandel? Oh, you know, just by the same way every other Republican will save it, by "adjustments" for toddlers. Not for Baby Boomers or seniors, but people Mandel's age (14) or possibly older. We must burn the village to save it, OBVS.

7:27 PM -- Sherrod Brown wouldn't raise the retirement age or cut benefits, but might raise the tax cap. Chuck Todd is all okay, cool. Mandel: Senator Brown, what did you do with all the money in the Social Security Trust Fund? Did you blow it on hookers? Did you buy a bitchen Camaro? WHY HAVE YOU STOLEN ALL OF SOCIAL SECURITY, SHERROD BROWN? "Where did that money go. WHAT DID YOU DO WITH IT?" (Actual quote for real this time.) Chuck Todd is pretty much just laughing now. He's all, yeah, okay, next question.

7:33 PM -- We are aware that many of you ladies are super gay for Sherrod Brown (second only to how queer you are for Martin O'Malley). But he does not marshal his thoughts so great-like in a debate format and is a bit of a word salader and so on and also too.

7:35 PM -- Which of our beloved Wonkers first called Mandel the mortician's apprentice? We would like to give credit where it is due except for how we never do that.

7:36 PM -- OF COURSE his model justice is Antonin Scalia. There is no possible other answer. But Democrats always so disgustingly, and with such partisanship, try to nominate outlandishly, OUTRAGEOUSLY moderate liberals. BOOO.

7:38 PM -- OK, pretty lady in green. You are pretty. And your voice is well-modulated! But "someone said the word 'liar' and so how would you be bipartisan" is SHUT THE FUCK UP. Hang on, gotta rewind Mandel's answer, to diagram it, for you.

7:40 PM -- Mandel: FIRST, I would find common ground with the other side by stopping foreign aid to countries that harbor terrorists, even though Senator Brown and I don't agree, but I heard there was like one Democrat out there that I could work with on it or something. Sherrod Brown voted to give a billion dollars to Pakistan, before Pakistan fucked us on Bin Laden. He also gives billions of dollars to Libya, where the government murdered our ambassador. Egypt is a terrorist and Muslim Brotherhood and they persecute Christians, and all through the Middle East women are treated like shit. So Brown probably did that too. "In a vacuum, this would be wrong. But we also have a $16 trillion debt." Sherrod Brown hates America, QED. "And I will work across party lines with Democrats to keep your tax dollars from going to countries that harbor terrorists." SECOND. Energy exploration. I would be bipartisan with Joe Manchin of West Virginia on burning more coal. Sherrod Brown wants Eastern Ohio miners to starve.

7:47 PM -- Mandel: "That is Washington-speak." In what respect, Charlie? Just because he said words? What exactly does "Washington-speak" even mean? (Nothing, apparently. It means nothing.) New questioner: Sherrod Brown, why are you and Democrats to blame for everything since you hold the Senate? Brown: ramble ramble trailed off word-phrase budget.

7:49 PM -- We honestly can't listen to Sherrod Brown. Good as he may be, it is impossible to follow along as he starts and stops and fumphers and so on. Josh Mandel: Kitchen tables, family finances, nonsense talking point "career politicians in Washington." He is relentless. "Do you have a 'Budget Control Act' around your kitchen table?" Ohioans pick up their pitchforks to murder Sherrod Brown, probably.

7:56 PM -- When Josh Mandel goes to Washington, he will not speak. He will mime all his votes.

7:58 PM -- Chuck Todd: Sherrod Brown, would you or would you not fellate the corpses of Simpson and Bowles? (Drink Drano.)

7:59 PM -- Oh my god, this green lady again. "You attacked Mike DeWine for voting with George W. Bush 95 percent of the time, but you have voted with Barack Nobummer 96 percent of the time! GOTCHA!" It is like GWB and BHO are equally the most terrible president in history, no?

8:01 PM -- Oh, and Sherrod Brown actually says some sentences that make sense. Josh Mandel, who so bipartisanly tried to keep grandkids in Ohio for all the bubbies, voted with the Ohio GOP 96 percent of the time -- except when the payday lenders gave him a "better offer." Concise, to the point, we could follow it ... what has happened to Sherrod Brown?

8:02 PM -- Josh Mandel now lying about having an exemption to jailing ladies for bortions if the "life of the mother" is threatened. Not according to his Right to Life League questionnaires. But more importantly, Senator Brown why do you support 9-month bortions? Brown: because I trust Ohio women to make their own decisions, peckerwoods. Mandel: nah mang, let's all be bipartisan, by outlawing Roe v. Wade!

8:06 PM -- The Bipartisan Wonder will totes work with BHO on moving the Ohio economy forward, except for if it's an auto bailout, cause fuck them.

8:07 PM -- That kid's granddad was "liberated," from a camp or something? Is Mandel a member of the tribe? Oy, a shanda for the Jews.

8:09 PM -- The Bipartisan Wonder whose favoritest justice is Scalia will not be working for the GOP! But how will he be the greatest fighter IF HE IS NOT ALLOWED TO SPEAK???

Also, that was really bizarre how he thanked Brown's wife. For what? Not being one of those singleton whores? We imagine it was a true attempt at graciousness, but why are you thanking other people's wives whom you presumably have never met? Oh, HELPMEETS. How you allow us to go on and conquer, for America, by greeting us with meatloafs and reluctant head!

8:12 PM -- OK, so after Sherrod Brown was like "I'm sure your wife is nice too? I've never met her? Grandkids ramble bubbies words?" we stopped listening. GOOD NIGHT OHIO!