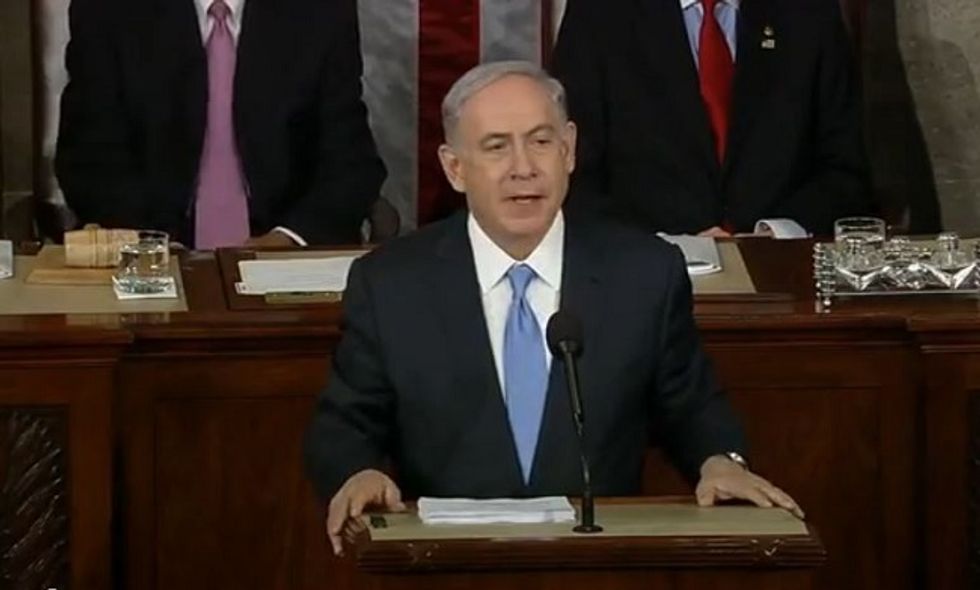 Bibi Netanyahu came to Capitol Hill on Tuesday to deliver his much-anticipated speech to Congress. (No we will not embed it here because we love you.) Wonkette’s Los Angeles bureau rolled out of bed early to watch it, because there is nothing we like more than starting our day with a little bloodthirsty warmongering. It pairs so well with coffee and rage. Here for your pleasure is our retroactive liveblog of the speech.

If you watched the speech and had flashbacks to George W. Bush circa 2002-03, you were not alone. For all the cheers, one might have thought the Sixth Fleet was already turning Tehran into a pile of rubble. We’re actually a little surprised House Speaker John Boehner didn’t immediately hold a vote calling on the president to fly to Iran and personally pull Ayatollah Khamenei’s still-beating heart from his chest and then fly back to the U.S. with Khamenei’s body strapped to the nose cone of Air Force One like an unlucky Reaver victim on Firefly.

No! Surely the mad Islamist has not discovered the awesome power of Twitter! God help us if he discovers #catsofinstagram, the world will be chaos.

Iran took dozens of Americans hostage in Tehran, murdered hundreds of American soldiers, Marines, in Beirut, and was responsible for killing and maiming thousands of American service men and women in Iraq and Afghanistan.

Yeah, and if Iraq had invaded and conquered Canada, we’d have been arming any insurgency up there. By all means bring up the biggest foreign policy mistake America has made in forty years, that’ll get us on your side.

So, at a time when many hope that Iran will join the community of nations, Iran is busy gobbling up the nations.

Buy war bonds! Hang up your blackout curtains! The Huns are on the march!

Listening to this shanda fur de goyim , you’d have thought the barbarians were already at Jerusalem’s gates, but he completely ignores a couple of facts. One, if Iran nuked Israel, the United States would turn it into glass about five minutes before last Tuesday. And two, if Iran nuked Israel, every Arab nation in the area would be furious because the fallout would poison them as well, not to mention leaving that tiny little area an uninhabitable wasteland for the next thousand years. That’s not exactly the end goal for anyone from any of the three Abrahamic religions.

There was more about the threat from Iran and the deal the world is about to sign to get Iran to stop trying to enrich uranium and build nukes and missiles that can “deliver that nuclear arsenal to the far-reach corners of the earth, including to every part of the United States.” What exactly is in that deal? Well, we don’t really know yet. Netanyahu just knows it’s bad, probably because it will allow Iran to continue to exist.

But did the Israeli Prime Minister have any suggestions for what to do? Of course not. He reminded us of pretty much every conservative whine about Obama’s approach to anything for the last six years. “The president needs to attack ISIS!” “Actually he is.” “Well he needs to attack them more harder!”

Of course this speech was not aimed at us. It was aimed at a) the Israeli public that is voting in a couple of weeks on whether it wants this bloodthirsty lunatic to remain as its prime minister and b) at the Republicans in the chamber and their right-wing friends in America who think Islamists are hiding under their beds at night, waiting for them to doze off so they can leap out, behead the infidels, and display their heads on the spikes atop the fence surrounding the White House.

Oh, and also at Sheldon Adelson, who will be bankrolling the next GOP candidate for president. Maybe it will be Bibi Netanyahu! He was probably polling at 70 percent in Iowa after this speech.

(A funny aside: Just before the speech, Adelson’s wife reportedly dropped her purse, which fell from the gallery to the floor of the House. If there is a better symbol of the corruption wrought by Citizens United and the loosening of campaign finance laws on our elected politicians, we’d be hard-pressed to find it.)

About the only positive note we can give Netanyahu for this speech is that at least he doesn’t pronounce it “nukular.” But close your eyes, give him a shitty Texas accent and picture blood dripping from a pair of werewolf fangs onto the dismembered corpses of small brown children at his feet, and the similarity to our last president would be inescapable.