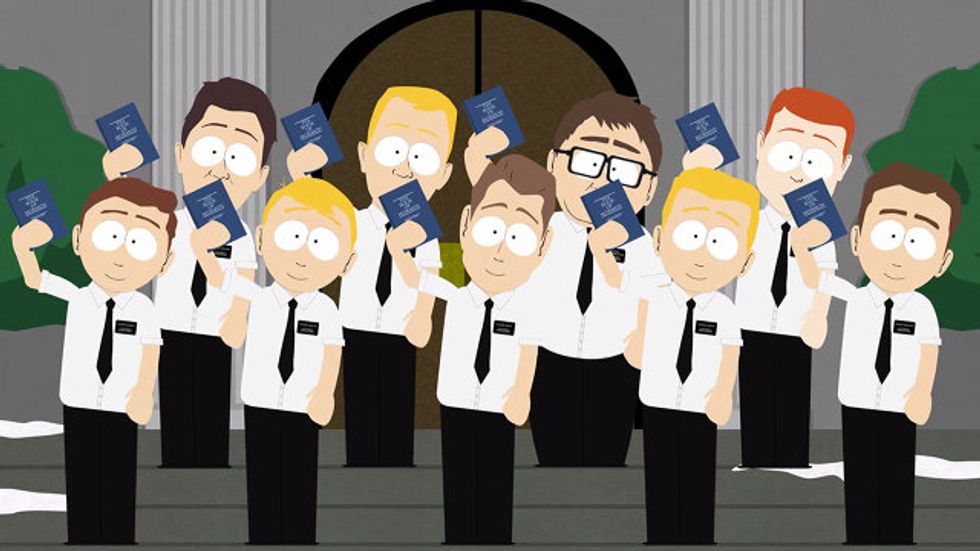 Here's some fun polling: In the very, very red state of Utah, Hillary Clinton and Donald Trump are tied in a presidential poll by the Salt Lake Tribune and the Hinckley Institute of Politics at the University of Utah. With five months to go until the election, both candidates have 35 percent support, with Libertarian Gary Johnson coming in with an uncharacteristically large number, 13 percent, because he's both Not Hillary and Not Trump. It's entirely possible that Utah could go to a Democrat for the first time in 52 years.

"For a state where the majority of voters have supported Republican presidential candidates since 1964, the fact that Trump is in a dead heat with Hillary Clinton suggests Utah voters are still very reluctant about a Trump presidency," said Jason Perry, director of the Hinckley Institute.

Which is not to say that people in Utah think Hillary Clinton is the kindest warmest bravest most wonderful human being they've ever seen on TV. Just that about equal percentages of Utahns despise both candidates:

But the biggest Election Day winner may be whoever opens the nose-plug concession as Utahns will largely be holding their noses as they vote. Sixty-seven percent of those polled have an unfavorable opinion of Clinton and 65 percent dislike Trump.

Trump struggles most with voters in the 18-34 age group and women. Clinton is likewise viewed unfavorably by younger voters and by 79 percent of members of The Church of Jesus Christ of Latter-day Saints.

We are very uncomfortable bringing up this story, not because we're raving Clintonistas or shy about Mormons, but mostly because typing "Utahns" just looks freaking weird.

Hillary's campaign is happy to take it:

"This is just the latest sign that Americans of all political stripes just aren't buying what Donald Trump is selling and agree he is unfit and unqualified to be president," said Clinton spokeswoman Lily Adams. "From his career of scamming Americans to his divisive and racist rhetoric, Utahns can't afford Donald Trump's America."

And while the poll found more dislike among members of the LDS church for Clinton, Trump isn't exactly winning many Mormon hearts and minds either.

As McKay Coppins noted in the New York Times,

Throughout the primaries, Mr. Trump was pummeled in the Book of Mormon Belt. In Utah, he suffered one of his worst defeats, finishing dead last with a paltry 14 percent of the vote. Outside Utah, he often underperformed in counties where Mormons were more heavily concentrated.

On some level, this dynamic might seem intuitive. Mormonism is a faith that holds up chastity as a virtue and condemns pornography as a soul-rotting vice; Mr. Trump is an unabashed adulterer who has posed for Playboy covers. Mormons draw inspiration from their ancestors’ modest frontier frugality; Mr. Trump travels the world in a tricked-out Boeing 757 with his name stamped conspicuously across the fuselage.

Coppins notes that many evangelical Christians are willing to overlook all the sinnin', especially since Protestants are saved already by the sacrifice o' Jesus and don't need a perfect candidate, as Faith and Freedom Coalition president Ralph Reed explained last week:

“We are not looking for a politician-messiah, we already have a messiah,” he said. “We understand that perfection is not the measure that should be applied. In all of recorded history, there has only been one perfect person, who walked on the earth and he wasn’t a candidate, and he wasn’t a political figure, his name was Jesus Christ.”

And so, Jesus Christ not being available, why not Trump? No real differences among the rest of fallen humanity, after all.

Coppins notes that Mormons have a pretty good reason to be wary of a presidential candidate who talks about cracking down on religious minorities. LDS leaders, usually fairly quiet on any political issue that isn't gay marriage, condemned Trump's call for a ban on Muslims traveling to the USA:

“The Church of Jesus Christ of Latter-day Saints is neutral in regard to party politics and election campaigns,” the church’s statement read. “However, it is not neutral in relation to religious freedom.”

Huh! A sect that in its early history was targeted for extermination and forced to physically leave what was then U.S. Territory is sensitive to mistreatment of religious minorities? Will wonders never cease? Says Coppins,

In an eerie bit of foreshadowing, the United States secretary of state sought in 1879 to restrict the flow of Mormon immigrants from overseas, arguing that America must be protected from these “prospective lawbreakers.”

Mormon leaders have not forgotten this history. As Elder Patrick Kearon said in April while announcing a new churchwide relief effort for refugees, “Their story is our story, not that many years ago.”

Pfft, but it's not like those old-timey anti-immigrant paranoids have anything in common with today's decent upstanding protectors of America, because shut up it's not at all similar.

Coppins also notes other factors that get Trump in Dutch with Mormons: Many, having done missions in Latin America, aren't as reflexively afraid of Messicans from all over the continent (and sure, some are anyway). Also, a lot of Mormons fail to fall into Trump's favorite category, the poorly educated, whom he loves:

And once the news gets around that Trump doesn't keep a year's worth of canned goods stored against hard times, he could really be in trouble.