Look At This Total Colorado RINO, Giving Away Slut Pills Like Candy 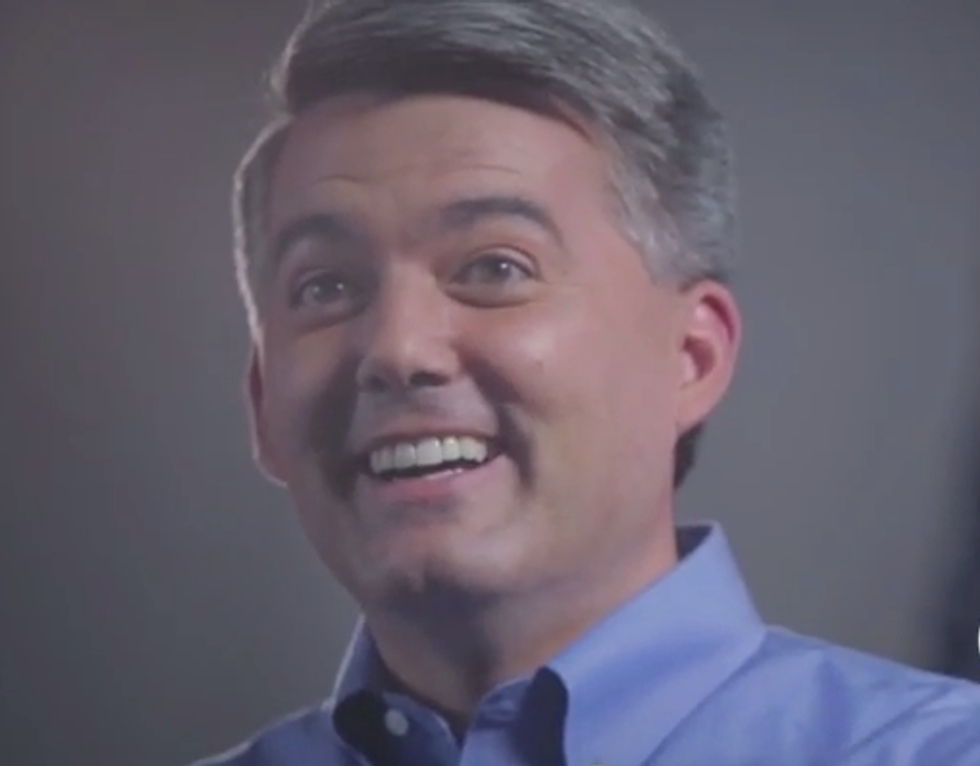 Ladies and friends of ladies, you will be happy to know that Colorado's radical feminist Rep. Cory Gardner, who is trying real hard to unseat Democratic Sen. Mark Udall, wants to give you all the slut pills for your sexxxytime -- and for freedom! -- unlike some people who are named (cough) Mark Udall.

What’s the difference between me and Mark Udall on contraception? I believe the pill ought to be available over the counter, round the clock, without a prescription. Cheaper and easier for you.

Mark Udall’s plan is different. He wants to keep government bureaucrats between you and your health care plan. That means more politics and more profits for drug companies.

My plan means more rights, more freedom, and more control for you. And that’s a big difference.

Wow, that sounds terrific! A Republican who wants to keep government out of your vag and let you do all the cheap-and-easy sex you want without those anti-contraception Democrats telling you to stop that right now, you slut!

Gardner is a big fan of the "personhood" movement to define an egg as a full-grown person, aka the Every Sperm is Sacred Because Jesus Said So, Or At Least Meant To, Trust Us, It's In The Bible Somewhere, No Really laws. He proudly advocated for Colorado's failed Personhood Amendment. He co-sponsored the Life at Conception Act. This type of legislation means no 'bortions, obviously, but it could also mean no contraception either. Why? Because some people think contraception is the same thing as abortion, even though it is not and they are wrong and also stupid. However, thanks to the Supreme Court's judicial activism in the Hobby Lobby case declaring "religious beliefs," even if they are factually wrong, the Most Important Thing Evah! (yup, still mad about that), contraception that is not abortion, but which Bible-humpers believe is abortion anyway because REASONS, can be classified as abortion anyway and subject to the same kind of riDICulous regulations and restrictions that shouldn't even exist in the first damned place. Which means, Cory, that if a personhood bill were actually enacted, women would not be able to get their contraception over the counter, round the clock, without a prescription -- or AT ALL.

And in case you're thinking that maybe Gardner doesn't agree with the Court's ruling that your health care really should be up to your employer instead of you because he just said five seconds ago in his radical feminist ad that he doesn't want other people getting all up in your ladycare bidness, don't be A Idiot. Of course he does!

Gardner's plan is to make birth control available over the counter, thereby allowing women the freedom to buy certain (but not all, obviously) types of birth control completely out of pocket, all on their own, even if it's really expensive, because that way, no one's "religious liberty" will be sad. Freedomy!

And in case you're also thinking that maybe Gardner is not completely in favor of the government getting right up in there and telling you and your doctor what kind of health care he thinks is best for you, sheesh, stop being A Idiot already. Gardner has exactly the sort of voting record in the House that you'd expect a "pro-life" Republican to have. And he has a big fat ZERO rating from NARAL and Planned Parenthood on reproductive rights because of course he does, duh, hello, have you even been listening?

So why is Gardner now whispering all this sweet pillow talk in our ears like we are total morons who cannot remember just how much he does not want women to have the freedom to make their own health care decisions? There must be some reason.

Nope, can't think of any reason at all.