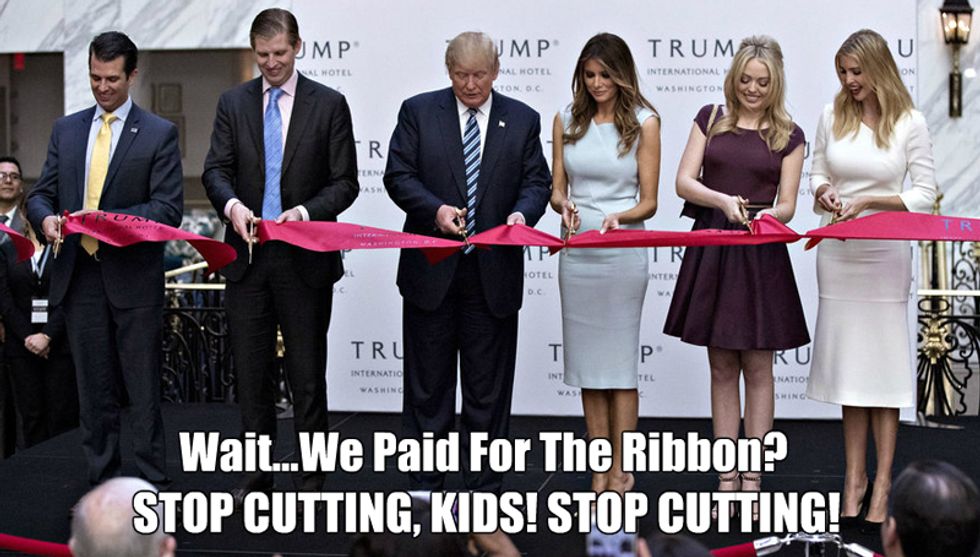 When we said 'under budget,' we only meant the ribbon

In a blockbuster revelation of sleazy financial Trump stuff everyone's become completely accustomed to, The Washington Post reported Friday that even while Donald Trump was talking up his terrific new probably illegal hotel on the campaign trail in September, the Trump Organization and LendLease, its construction manager, suddenly decided to stop paying three contractors on the project. The Trump International Hotel, housed in DC's Old Post Office, was supposed to be a showcase for the managerial genius of Trump's daughter Ivanka. We guess she's learned everything she knows about business from her dad! All three companies have filed "mechanic's liens" for unpaid work on the hotel totaling over $5 million; Friday, we learned the Maryland electrical contractor, AES Electrical, is owed nearly $2.1 million for work it did in the frenzied final weeks of construction, according to the company's executive vice president, Tim Miller, who says his firm

assigned 45 members of its staff to work 12-hour shifts for nearly 50 consecutive days to get the lights, electrical and fire systems prepared on time.

So there's an exciting new wrinkle on that "under budget and ahead of schedule" line Trump keeps repeating -- not too much of a surprise, since the "ahead of schedule" part was a fib too -- the original opening date was supposed to be the end of 2015, which kept getting moved back. But the final deadline under Trump's contract with the U.S. government was August 2018, so even though the hotel opened a year after Trump's schedule, he insists he was totes ahead of the final deadline, so he wins! And if he stiffed a few contractors to keep $5 million off the budget, so much the better, right? Sucks to be you, contractors, but you knew who you were doing business with, didn't you?

[wonkbar][/wonkbar]In addition to the $2.1 million the Trump Organization is stiffing AES for, they also have mechanic's liens filed against them by two other firms: A Washington DC plumbing contractor, Joseph J. Magnolia Inc., says it's owed $2.98 million, and a Virginia company, A&D Construction, is seeking $79,700 for "wall base and crown molding" work to make the hotel all pretty. Wouldn't you know it, John D. Magnolia, president of the plumbing company, voted for Trump in November, and says that while the Trumpsters had paid most of their bills, that nearly $3 million left outstanding has him worried, especially with the controversies over whether Trump will be in violation of his GSA contract once he takes office. Magnolia hasn't heard from Trump, or from Ivanka:

“They have been decent people and so forth but the issues that are going on now, with all the talk about removing him from the lease we are concerned about what is going to happen there. So it’s basically a business decision that we had to make,” he said. [...]

“We’re kind of working through that right now. Unfortunately Mr. Trump and Ivanka and so forth, they are I guess preoccupied by other matters now. They are trying to go run the country. So we’ll just see what happens,” he said.

Nope, not worried at all, everything's fine, that guy didn't sell the contractors or the country a bill of goods. Just a minor payment malfunction. We're fine. Uh, how are you?

A&D Construction, which was subcontracted by another contractor, not by the Trump Organization directly, may "only" be owed $79,700, but that's a substantial chunk of change for a small company, says its attorney, Richard M. Sissman. And here's a big surprise: Despite depending for its viability on getting paid for the work, A&D hasn't heard at all from the Trump people.

“I have not heard from anyone. My client is a small-time operator so he does not have deep pockets,” Sissman said.

[wonkbar][/wonkbar]Well! We bet there's a perfectly reasonable excuse for all this, which is that Donald Trump is a documented swindler who regularly skips out on his bills because he doesn't think he needs to pay them. He's Donald Trump, after all, and if he doesn't pay you, it's because you're at fault, duh. Or maybe it's because these rubes just don't understand how the big-time construction biz works, which is what a statement from the Trump Organization implies:

“In developments of this scale and complexity the filing of nominal liens at the conclusion of construction is not uncommon as part of the close out process,” a representative for the company wrote. “In the case of Trump International Hotel, Washington D.C., the Trump Organization has invested over $200 million dollars into the redevelopment of the historic Old Post Office and is incredibly proud of what is now considered to be one the most iconic hotels anywhere in the country.”

$2.1 million, $2.98 million -- those are indeed mere chickenfeed. And honestly, if that little construction firm can't eat a $79,000 loss, does it really deserve to be in business? Most of us should be able to handle a client skipping out on a tiny amount like that, right?

The VP of the electrical company, Tim Miller, told the Washington Post he'd considered not saying anything publicly about the nominal $2.1 million his company is owed, since he didn't want to make a "political issue" of it, but eventually decided to talk because the family-owned company really isn't in a position to simply give up on getting paid the final portion of its $17 million contract with the Trumps. Seems kind of churlish of him not to give the president-elect a little congratulatory discount, doesn't it?

“The majority of that [final] work was done in the last 45 days or so before the hotel opened, and it required a tremendous amount of manpower and effort on our part to get that done because it was a crunch to get the hotel open,” he said [...]

“We’re not in this for any sort of political reasons,” Miller said. “We have no ax to grind, political or otherwise. We’re a business. We have 700 employees that we pay every week. We have bills. We are effectively financing this work, and we don’t think it’s right. That’s really it.”

Wow, what a whiner. "Pay us what you owe us." Is he trying to delegitimize Donald Trump's election or something? SAD!

There is at least this silver lining: Now that everyone in the world knows Donald Trump is a cheap sociopath who never pays his bills, his ethical conflicts may no longer be an issue: No construction firm with a lick of sense should ever risk working with him ever again.