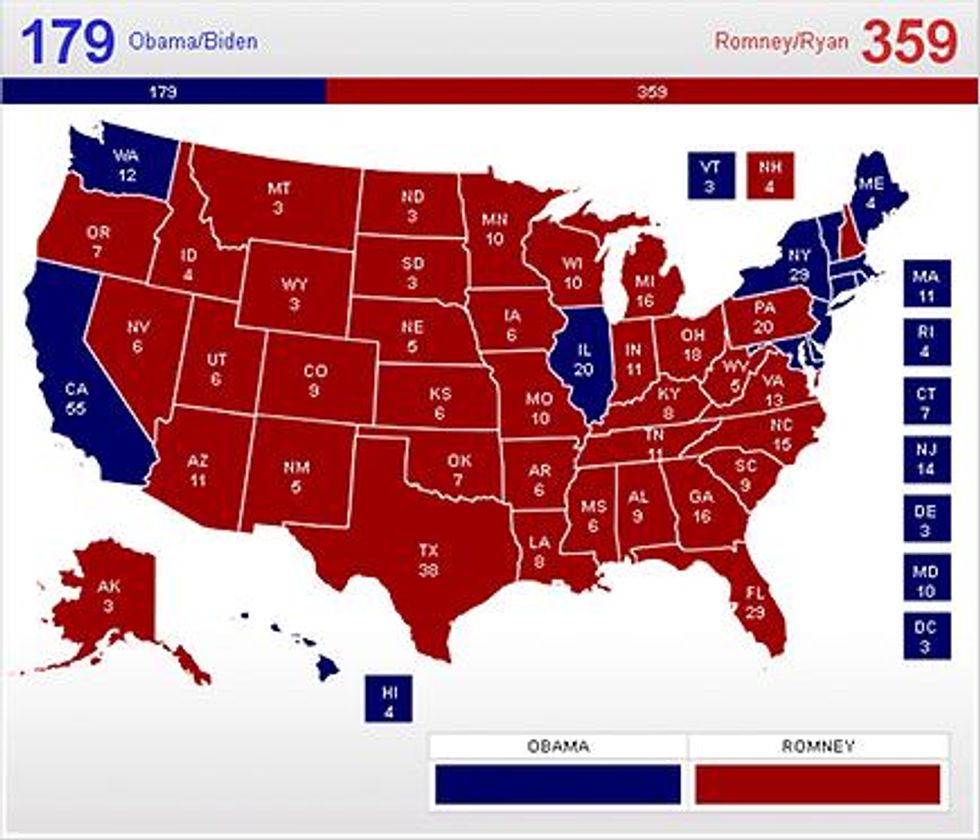 It is time, once again, to PANIC! As you can see above, Unskewed Polls has released a new chart that at first blush doesn'tseem to have any basis in reality. So why would they post such a hilarious result? Well, you have not been keeping up with Your Wonkette. Let's rectify that now! It is so that when they steal the election, they can point to this "polling" and say the results were in line, duh. As Doktor Zoom explainered with an assist from Harper's, the GOPpies are ready and able to steal every precinct that doesn't count paper ballots by hand. As Your Editrix explained a week or whatever ago, one of only six voting machine vendors is owned by former Bain employees. (The others, per Dok's Harper's article, are pretty much all owned by the Koch Brothers and run by actual felons, except for the ones that are owned by Tagg Romney.) And as some former NSA analyst explained (but we didn't post on it, because "depressed"), the way they steal your votes is by siphoning them from the largest precincts. Oh yes, and as The Grio explained this week also too, they are already disappearing early votes from the totals in heavily African-American and Democratic Broward County precincts. But that one, first described as a "computer glitch," was totally just a woman who couldn't do numbers good and stuff.

Blah blah blah tinfoil hat. Sure! Count us in! Because it is official Wonkette Editorial Policy that Bush stole Ohio, we don't care if you kick us out of your Cool Pundit Club. And who else seems to be coming around to our way of thinking? One "Morning Joe" Scarborough, that's who! Witness:

With President Obama maintaining his five-point lead in Ohio in today's poll, Romney must run the table on the six remaining swing states or expand the electoral map. Considering how rough the internals look in this morning's Ohio survey, Boston must know that winning the White House now depends on their candidate stealing Michigan, Minnesota or Pennsylvania out of the Obama column next Tuesday. Their play in those three Midwest states now appears to be more out of weakness than strength, though a new survey does put Romney within 3 points in Michigan.

Welcome to the Voting Machine Truther Brigades, Joe. You'll like it here, except most of our refreshments are vegan bullshit.