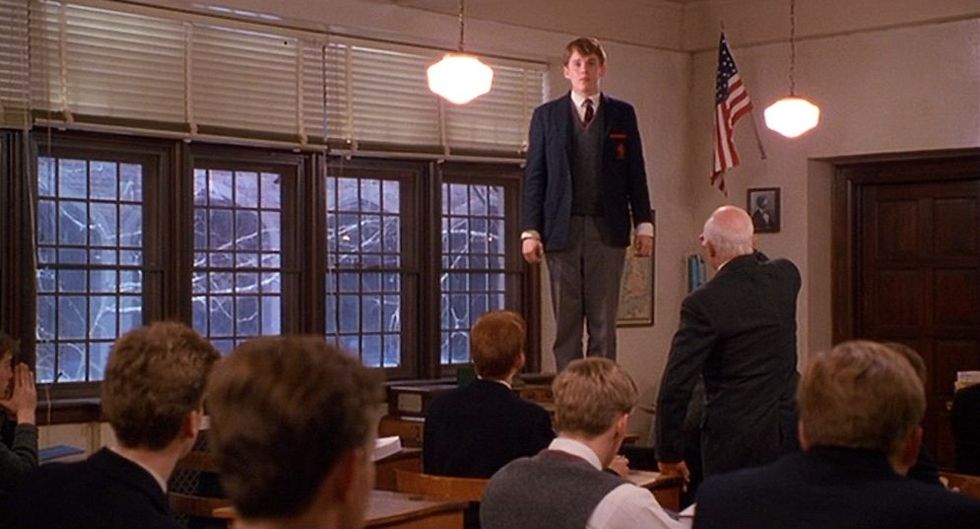 Guys, shut up, we know this did not happen in the Dead Poets Society movie film.

Hey Wonkerinos, sorry to be bringing you all these stories about rape and sexual abuse on an otherwise pleasant Thursday, but here's a thing:

Rhode Island State Police are investigating allegations of sexual abuse of more than two dozen students by employees of the prestigious St. George's School in the 1970s and '80s -- abuse the school admitted it "failed on several occasions" to report to authorities. [...]

The school, in a statement Tuesday, said it "deeply apologizes for the harm done to alumni" and for how its handling of the abuse "served to compound this harm."

The folks at this prestigious Episcopal prep school are so sorry. OR ARE THEY? A lawyer who went to the school, Eric MacLeish, held a presser with victims and issued a 36-page response to the school's investigation of itself, which it found utterly lacking:

"We've been trying to work patiently with the school since March. This was never what we wanted, but we got nowhere," said attorney Eric MacLeish, who attended the school. "We got flimflammed. ... The school has spoken. The school has acted and not acted, and now it's time for the victims to speak."

So, sounds like this preppy boarding school, where (fun fact!) Tucker Carlson did bros-before-hos on the debate team (or whatever he did) in the '80s, and where he met his wife, Susan Andrews Carlson, whose dad, Rev. George Andrews, was one of the school headmasters during the time in question, had some real rapey business going on! And it sounds like instead of, you know, DOING SOMETHING ABOUT IT, the school tried to fire a molester here, slap a diddler on the wrist there, and otherwise decided to stick its head in the sand and hope the problem went away. Surely it shouldn't have gone to the authorities and sullied the good name of Tucker Carlson's alma mater!

But boy howdy, the school's own investigation found some messed up shit! Like so:

Wow, that is a whole lot of damning stuff! The lawyer MacLeish identified "EP2" in his official response as Rev. Howard White, and "EP3" as Franklin Coleman, a former choir director.

But according to MacLeish, the school left out a bunch of fun facts in its report, like the time a "victim was sodomized with a broomstick by a group of students – an incident that ... was mocked in the school's yearbook months later." Yeesh.

MacLeish says this is what the school did, instead of going to the police about any of its rapey jizz-drunk staff:

"Officials were not reporting claims from students but instead, imposing gag orders on those victims," MacLeish explains. "There are prosecutable crimes that occurred here and I expect more victims will be coming forward."

Nice! For example, Anne Scott, the student raped by Al Gibbs The Dead Guy, says: "I was threatened not to tell anyone. If I told anyone he would come after me and I would be in trouble." Katie Wales, who had her naked picture taken against her will, says the school told her, "You are just a distraught young lady, you are mentally unstable." Silly girls, always being so distraught and mentally unstable about being sexually abused.

Here is some good news, or whatever counts as "good" in this story. According to CNN, the statute of limitations on rape in Rhode Island is INFINITY YEARS, which means somebody could actually go to jail for this shit.

[contextly_sidebar id="22LhQLtV3TVSEsFAetyiDoXAu77drYMw"]As for Tucker Carlson, since he was there during the time in question, we say in all seriousness that we sure do hope he didn't have to endure any of this. That said, if this was the climate of the school where he went, it COULD explain, at least a little bit, why he might have gone apeshit and beat the shit out of that gay guy in the bathroom at Georgetown. Or maybe Tucker is a creep all by himself, probably most likely.

Anyway, we hope some heads gon' roll up yonder at St. George's, yes we do.