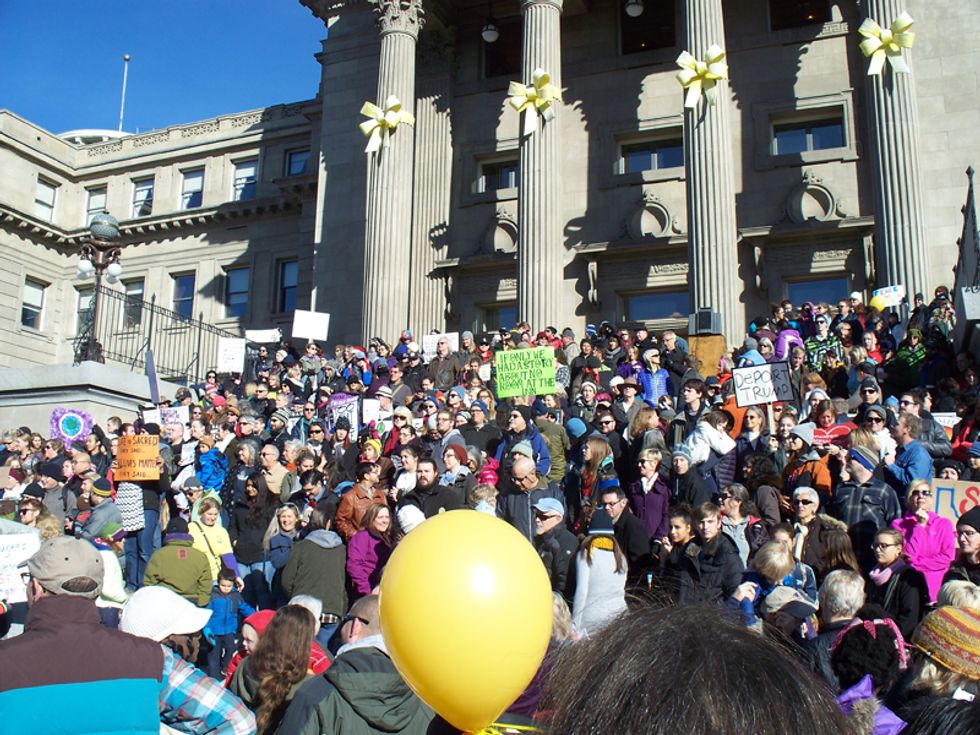 Yr Dok Zoom's hometown of Boise, Idaho, hosted a demonstration on the steps of the state Capitol in support of refugees. Idaho has become home to about 19,000 refugees since the 1980s. Across the street from the 700 or so pro-refugee folks loosely organized by an ad hoc organization called Solidarity Idaho was a counter-demonstration held by "3 percent of Idaho," a paramilitary militia opposed to admitting refugees who might turn out to be Muslim terrorists. (The "III Percenters" take their name from the dubious belief that only 3 percent of colonists fought the British in the American Revolution, and that a similarly small percentage of True Patriots can defeat today's tyrannical federal government. If that becomes necessary.)

Thanks to some genius of scheduling, Boise's annual holiday parade ran long, so we were treated to the sight of one crowd on the Capitol steps with signs saying "Idaho's Too Great For Hate" and "God Says 'Let My People In,'" while the other side of Jefferson Street featured a smaller crowd with holstered pistols, lots of flags, and signs like "Ban Islam! Deport All Muslims!" and "Support Homeless Veterans First." In between rode Miss Teen Idaho on a horse with tinsel and jingle bells, and eventually Santa Claus. Two groups of Americans, separated by Christmas.

The pro-refugee rally was full of feisty liberals, half of whom seemed glad for the guys across the street for the sake of contrast. A couple of clever infiltrators from the III Percent rally sat on the steps with signs reading "No Vacancy" and the word "Sharia" inside a red circle and slash. Why they decided to sit next to a young woman holding a sign reading "Deport Trump," we couldn't tell. They were asked to leave by security guards, who explained the Solidarity Idaho rally had the permit, so please, no interlopers.

After Santa passed, a brigade of sweeper trucks followed, cleaning up all the horse poo and clearing the way for the III Percenters to start spreading bullshit before the pro-immigrant rally started. Fun moment: A III Percenter leader announced, with megaphone pointed only to his crowd, a "moment of silence" for those murdered in Paris. Then, turning around so part of the pro-refugee crowd could hear, he complained that the patriots were having a moment of silence and the pro-refugee crowd should show some respect.

[contextly_sidebar id="gL2yGhmuw8ayeRkyuZlBysvULlliJP6y"]The militia counter-demonstrators definitely had the audio advantage. Whoever planned the rally didn't have access to a particularly strong amplifier (update: one of the organizers mentioned in our comments that the sound system was provided by the Capitol, so nobody needs to worry that Idaho is overspending on lavish PA systems), so several refugees' personal accounts of having gone through hell and finding a home in Boise were drowned out by chants of "Vets First! Idaho First!" or our favorite, "Security First, Then Compassion!" While one refugee tried to speak, the militia dudes turned their bullhorns toward the Capitol to bellow the Pledge of Allegiance, yelling "With liberty and justice for all!" without the slightest sense of irony.

Gail Shuck, a Boise State professor who directs BSU's English Language Support Programs (full disclosure: she's also Yr Dok Zoom's ex) told stories about several students she'd worked with: a woman who fled Afghanistan with her mother, escaping forced marriage to a Taliban soldier whose comrades had killed her father and brothers. An Iraqi man who translated for U.S. forces and escaped being killed in revenge. A Somali man who took Shuck's English class a decade ago and now works as a nurse in Boise, while also helping newly arrived refugees get settled. And another Afghani woman who walked across Iran to Turkey with her husband, children, and elderly mother, only to get separated from two of the kids and her mother. After months, they were reunited and now live in Boise.

In remarks aimed at (and unheard by) the people across the street, Shuck acknowledged that anger at terrorism is natural, but that it's vile to:

tap into fears of the foreign, of the unknown, making the situation so much worse for extremely vulnerable people just wanting to feel safe, maybe for the first time in their lives.

Fortunately, she emailed us a copy of her speech, since parts of it were drowned out by motorcycles gunning their engines and the III Percenters chanting "Not true! Not true!"

Next came state Rep. Hy Kloc, who was born in a Displaced Persons camp in Germany and came to the U.S. with his family after World War II. Apart from his parents and brother, Kloc lost his entire family in the Holocaust, and after three years in the camp, finally made it to America.

"And just like the refugees of today," Kloc said, "that was the only thing we could do, there was no going back." Kloc recalled the shameful history of the passenger liner Saint Louis, which in 1939 reached American waters with nearly a thousand European Jews aboard, but was turned back, because "America First." After the ship returned to Europe, half the Jewish passengers were killed when Hitler overran the continent.

"There is a reality of fear today in our country that is similar to the fear in 1939," said Kloc. "We are not that country; we are not those people. We do not want to repeat that history." Again, thanks to Mr. Kloc for a copy; he too was nearly shouted down.

When the rally ended, at the request of a leader of the III Percenters, an organizer of the Solidarity rally met him in the street to shake hands, to show there were no hard feelings between the two groups. Mighty civil gesture from the folks who tried to drown out every word of the pro-refugee rally.

Here's some local teevee news video from KBOI-TV, which weirdly frames the story as if the pro-refugee rally had been a response to the militia guys: