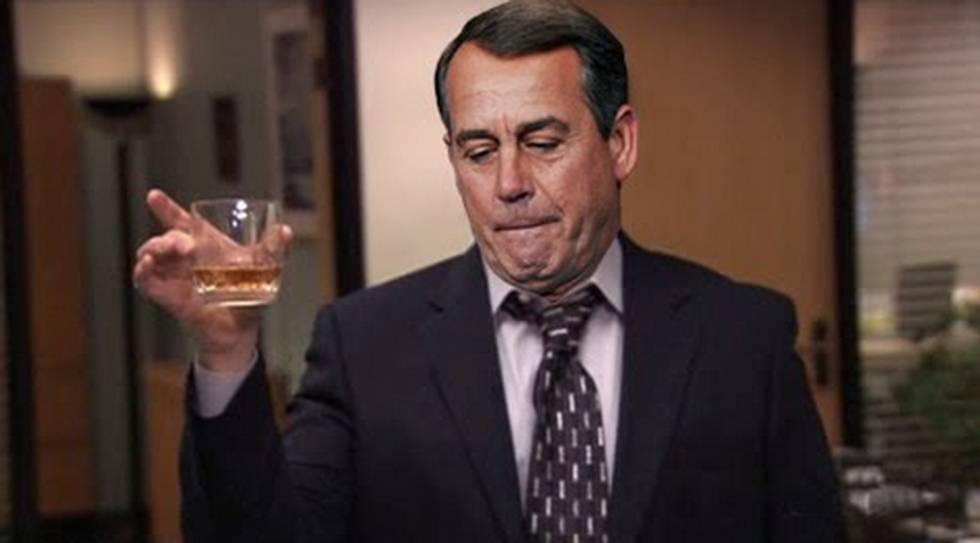 We're Americans, and when life throws us lemons, we make lemonade, so get out the apron and light up the old barbecue, 'cause it's time for some good old down-home "Moo Goo Dog Pan," Louie Gohmert style. Sure, it sounds bad at first, but think of it like rape, say with a ten inch plastic vaginal probe, something you just have to lie back, close your eyes and enjoy when it happens to you, and eating your pets is happening to you, 'cause Louie Gohmert isn't going to be Speaker of the House, and we owe those commie bastards in China money, because Obama.

See, Congress knew Louie Gohmert, he of the dancing little dyed eyebrows, can come off a bit -- ahem -- unbalanced, while others less kind have been known to refer to him as that "stuttering little lying prick," so they went and reelected Boehner as Speaker, which is a real blow on behalf of sanity, because it's been awhile since the "adults" have been in charge. So the new Congress's first order of business on Tuesday was a vote to take a lesson from the Sam Brownback School of Accounting, whereby, all the promises of wealth pouring in to government coffers, as we lower taxes even further on the rich, then count them as actual future revenue, instead of rotting infrastructure, defunded education and auctioned-off government buildings. That way, private entities can rent them back to us forever and ever and ever, just like in Arizona. Yippee!

Today's another day though, and there's still so much work to be done, for sanity. The Keystone Pipeline, providing a total of 38 well-paying permanent jobs (talk about Morning in America!); legislation to strip health care from a million Americans (it's a start!); and last but not least, mass round ups and deportations of literally millions of people who have lived in the country since infancy (or at least they'll make sure that everybody stays illegal). Can't forget that. They sure won't.

Hopefully, John Boehner -- in defense of Steve Scalise, with tears in his eyes, like Loretta Young in "The Stranger," howling "He's not a Nazi! He's not a Nazi!" over and over and over -- will make America realize that the number three Republican in Congress really is just like Jesus, without the baggage, so shut up already.

So, get ready, folks. Sanity is back and the adults are in charge, and you ain't seen nothin' yet.