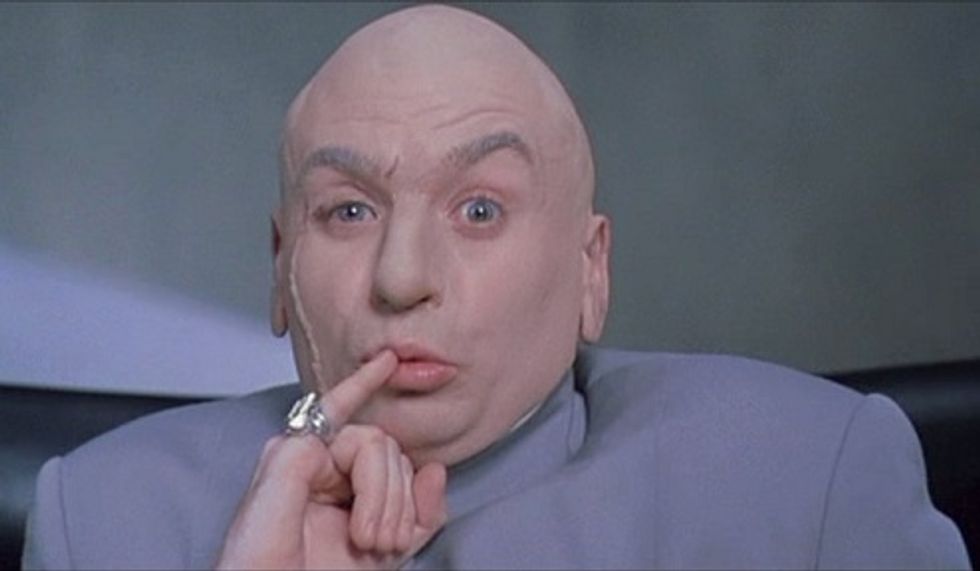 Texas trailer hitch replica Louis Gohmert wants to get to the bottom of this IRS scandal so badly he’s willing to put the taxpayers’ money where his mouth is with a bill he introduced last week, the “Identify and Return Sent E-mails Act,” which would provide a cool $1 million to any whiz kid who can locate whatever emails disappeared from Lois Lerner’s computer when the hard drive crashed in 2011. Where Louie and the bill’s co-sponsor, Rep. Bill Flores (R-TX), think these emails might reside since the IRS, per its email retention policy, overwrote its backed-up server tapes every six months long before this “scandal” broke, was left to everyone’s imagination.

Awesome pun, Louie. Somewhere Jay Leno is shaking his giant chin and muttering that you're a total hack.

Louie’s bill also offers $500,000 to anyone who can provide information about who might have destroyed the missing emails in the first place (Yr Wonkette’s theory: It was a little gremlin living in Lois Lerner’s hard drive that caused the crash, most likely on orders from George Soros and ACORN), as well as withholding twenty percent of every IRS employee’s salary until all the emails are recovered. That will be great for the morale of the organization, which thanks to sequestration and the insane loathing of the members of Congress that fund it, has seen its budget steadily shrink over the last few years even as the scope of its responsibilities, including the evaluation of 501(c)(3) and 501(c)(4) organizations to determine if they qualified for tax-exempt status that led to this whole shitfuffle in the first place, have expanded.

It’s a neat trick the wingnuts have pulled off here: Cut the IRS budget so badly it has to take shortcuts to do its job, and then when the shortcuts inevitably result in bureaucratic fuckups, shoot down the idea of giving the agency the tools to do its job properly in the first place by sneering about how it already can’t do anything right.

As for Louie Gohmert, there is no word on what exactly he thinks the missing emails will show, or whether even these magical emails are not among the 67,000 Lerner emails the IRS has managed to recover by scouring other employees’ hard drives and turned over to Congress already. Of course we would expect any emails hyped as being the smoking gun to work out as well as the other smoking guns the GOP announced in the last week: the “ZOMG Lerner wanted to audit Chuck Grassley,” nicely debunked by Dave Weigel, and the “IRS contracted a company called Sonasoft to archive its emails and then cancelled the contract around the time of the hard drive crash, which is suspicious for some reason,” which was debunked by the company itself.

In fact, the GOP is getting so desperate that oily shitweasel Darrell “Firebug” Issa is now demanding every email that Lerner sent, received, or was even blind-copied on since 1986, when she worked for the Federal Election Commission and email hardly existed. No word on whether Issa will push all of Lerner’s past employers to turn over any snipes they may have running loose in their records rooms as well.