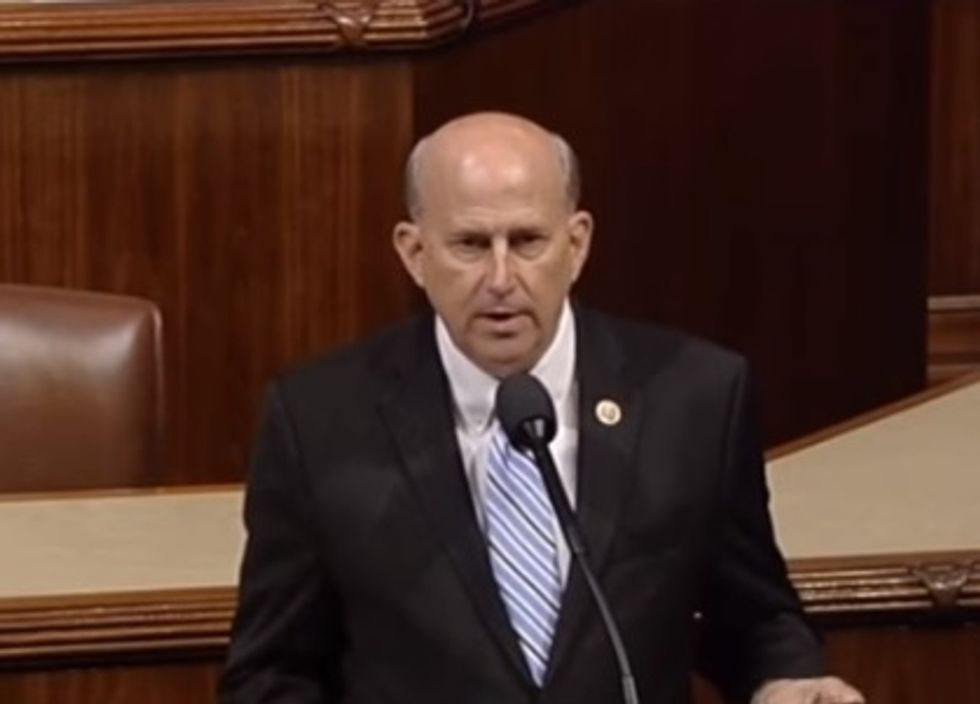 There is a congressional district in Texas where A MAJORITY of people choose this dumbfuck, EVERY TIME.

Well shitfire and damnation, y'all, Texas Republican Congresshick Louie Gohmert has some thoughts to share about gays, outer space, Matt Damon, and traditional het'rosexual fuckin'! Let's all take Louie by the hand, so that he might convince us of our errant ways:

God made them male and female. He didn't mention question marks. [...] For our civilized history, people, a man that didn't know which he was, was pitied, loved, encouraged, but educated people said, "That's perverse."

All the love and pity and encouragement that's been visited upon transgender people throughout history, by folks like Louie Gohmert, it's overwhelming.

[wonkbar]<a href="http://wonkette.com/600482/louie-gohmert-would-have-gotten-a-stiffie-and-heres-why"></a>[/wonkbar]Let's skip forward, through a whole bunch of horseshit about how the Bible and Moses and Jesus said "EW GAYS" (they did not actually say that) and get to the Gays In Space stuff. You should understand that Louie Gohmert, being a very, very stupid man, pivots immediately from trans folks onto gays, because he doesn't know the difference. Also, because too much talk about transgender bathroom nonsense makes his Little Louie get too 'scited.

I mean, I really wonder how many people in this body, who had the ultimate power to decide whether humanity would go forward or not, whether it was an asteroid coming, something that would end humanity on earth, as dinosaurs were ended at one time. OK, we've got a spaceship that can go as Matt Damon did in the movie, plant a colony somewhere, we can have humans survive this terrible disaster about to befall ...

Holy shit, do you guys need a break? We need to breathe for a second, because corn-fuckin' yokel say WHAT?

If you can decide, what 40 people you put on the spacecraft that would save humanity, how many of those would be same sex couples? You're wanting to save humankind for posterity, basically a modern-day Noah. You have the ability to be a modern-day Noah, you can preserve life. How many same sex couples would you take from the animal kingdom and from humans, to put on the spacecraft to perpetuate humanity and the wildlife kingdom?

I ... um. Let's unpack this, in as rapid-fire ranty form as we possibly can.

The majority of gay babies are born to straight people, so even if you only took heteros to space, it wouldn't be long before the official planetary motto of the new space colony on Mars would be "BYE FELICIA!" ALSO, you don't really need married straight people to plant a human colony in space, you just need people of different sexes to fuck each other, FOR THE GOOD OF HUMANITY. AND ANOTHER THING, marriage doesn't exist in the animal kingdom (yet), and while yes, homosexual behavior is abundantly FABULOUS in the animal kingdom (or as Louie calls it, the "wildlife kingdom"), we're pretty sure animals know how to fuck good too. Even the gay ones.

And does Louie think the gays and lesbians are so selfishly caught up in their brunches and their Indigo Girls fan club meetings that, if called upon TO SAVE HUMANITY, they wouldn't suck it up and do gay fucking, but in the straight way? Please, gays are the BEST at fucking, we are like the President Of Fucking. TOTALLY up to the task.

Or if some space-twinks ARE too selfish and are like "ewwwww vaginas," we could always take a few turkey basters on the spaceship! Does Louie Gohmert's pocket Constitution and his dumbfuck, pictorial pop-up version of the Bible somehow prohibit repopulating space with a fucking turkey baster?

Jesus, so many questions!

That said, when the gays invade space, Matt Damon is welcome to come along, you know, for the good of the species, IN OUR PANTS.