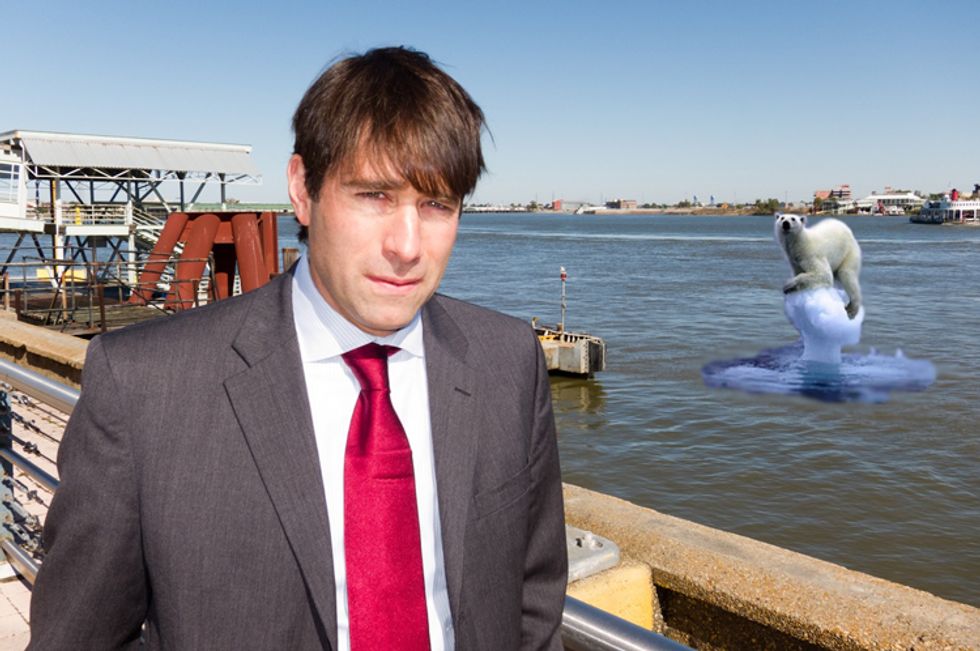 Here is a surprise! It turns out that Garret Graves, the Republican who won Saturday's election to fill the seat of Louisiana Congressman-and-now-Senator-elect Bill Cassidy, actually believes that science is real! He doesn't deny global warming, and even helped develop plans for how Louisiana should deal with the effects of rising sea levels when he served as Gov. Bobby Jindal's "coastal czar" -- though maybe since czars are evil and bad, maybe he was more of a majordomo. He actually said that rising sea levels would be bad for Louisiana one time.

In response to another Republican candidate's unhinged video claiming that climate change is just a big hoax, Graves said,

"You want to take your thermometer, I’ll take a ruler,” Graves told reporter Stephanie Grace when asked about that video. “To say that it’s not happening while we’re watching it is not in the best interest of the people we’re supposed to be representing.”

Radical, crazy stuff! Looks like Graves can say goodbye to any hopes of serving on the House Science Committee.

Dave Weigel even got Graves to talk about his embarrassing pro-science heresies a little, although he was of course cautious not to sound too all-fired crazy, especially because one of his aides had apparently cautioned him to be careful:

"South Louisiana is somewhat of a canary in a coal mine, in that we are experiencing—and I want to be very clear on what I say here—relative sea level rise," he said. He beckoned over his aide to record the conversation, explaining that "we ran into an issue with someone recently," but he didn't stop talking.

"What's going on is that Louisiana is experiencing unprecedented rates of relative sea level rise as compared to anywhere else in the country," he said. "That's a combination of the measured sea rise we've observed here, but more importantly it's the rate of subsiding, or sinking. Now, if the rate of the sea rise projections are accurate, what's happening in Louisiana today is something that other states and countries will be facing decades away ... Without action, there are studies that show the coast of Louisiana could be up somewhere near present-day Baton Rouge by 2100."

But don't go getting any crazy ideas that he's some sort of wild-eyed radical who thinks we need to do anything about the climate. Didn't you see the "R" after his name?

Graves saw my next question coming, and answered it before I asked it. "To be clear, I don't support in any way shape or form coming in and doing mandatory emissions regulation," he said. "We need to approach it from an incentive perspective. How do you introduce technology, technological solutions, efficiency solutions, into the system? We can reduce emissions, we can do other things that provide benefits, like reducing energy consumption, reducing energy rates, reducing production, things along those lines.

Hey, some of that stuff still sounds awfully like an acknowledgment that humans affect the climate! And market based solutions? That's where we got cap and trade and other communist plots from the Heritage Institute! RINO ALERT! Just to be on the safe side, Graves added that he really, really hates Big Government a whole bunch:

"I'd add that the US Army Corps of Engineers is the most inefficient agency I've ever absorbed in my entire life. If we are ever going to protect the coast, the corps has to restructured, reformed, or eliminated."

But then Weigel had to go and bring up the orthodox GOP article of faith that climate change is a hoax, or at the very least a mystery that no one should talk about. Since he couldn't deny his unholy affiliation with science -- no "I'm not a scientist" absolution for him -- he at the very least made it clear that he wasn't going to come right out and say that science is all the way real, either:

"I'm not going to get into a prolonged discussion over climate science," he said. "It was my job for over two years. I enjoy talking about it, but I'm not going to get into the anthropogenic versus biogenic causes of climate change right now. I'll just say this: We have measured sea rise in south Louisiana. For us to stick our heads in the sand and pretend it's not happening is idiotic, and it puts the lives of 2 million people who live in south Louisiana in jeopardy."

Poor guy. You can almost hear him trying to think of ways to back out of that before his first town hall. We can hardly wait for someone to ask Graves how old he thinks the Earth is.