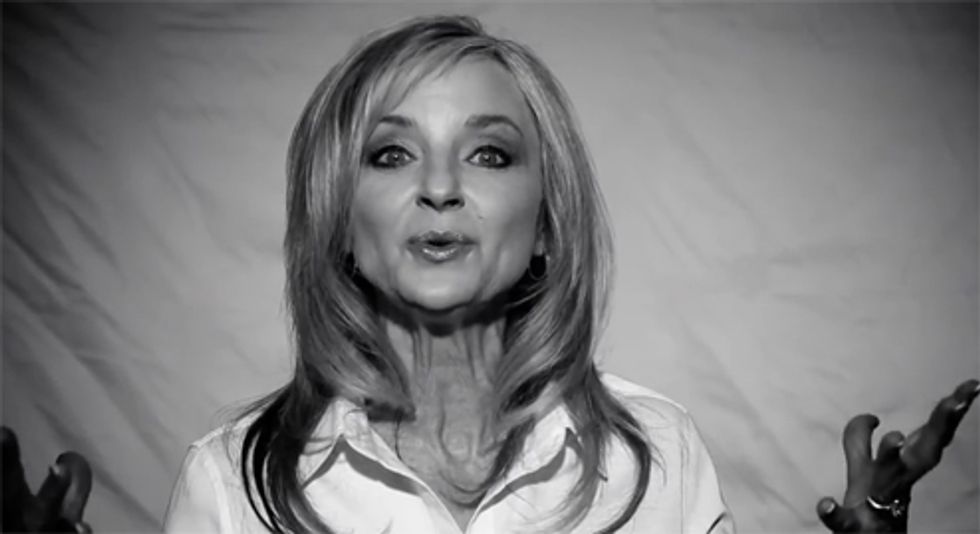 This nice lady is Sarah Palin wannabe and Louisiana state Rep. Lenar Whitney, who would like to bring her special brand of smarts to the U.S. Congress. She has an exciting video in which she explains that Global Warming is not real, because Al Gore, who made the whole thing up himself, is a big lying doodyhead who hates the petroleum industry, which by the way Lenar Whitney just wants you to know is the kindest, bravest, warmest, most wonderful extraction and refining industry she's ever known in her life.

Also, Lenar Whitney is yet another conservative Republican who thinks that lifelong socialist George Orwell would totally love her a whole lot, since he once said “In a time of universal deceit, telling the truth is a revolutionary act.” And she has some truth to lay on you: ever since Al Gore completely invented global warming in his movie that she cannot even name correctly, The [sic] Inconvenient Truth, Earth has not gotten warmer!! In fact, she says,

“Any ten-year-old can invalidate their thesis with one of the simplest scientific devices known to man. A thermometer.”

“The Earth has done nothing but get colder each year since the film's release. God certainly has a wonderful sense of irony.”

He certainly does! For instance, He commanded His people not to tell lies, and yet here's Lenar Whitney!

Leaving aside the fact that global warming did not stop in 1998 -- a favorite myth of science deniers -- what's really remarkable about the video is the generous tongue-bath that Whitney offers the oil and gas industries, which are in her view poor downtrodden heroes that just cannot seem to catch a break. They've given us wealth and material Plenty, but do we truly appreciate them like we should? Heck, no, our so-called "scientists" all agree that CO2 is warming the planet, and that can't possibly be true, because Oil and Gas are good for us:

"It was the burning of oil that energized the foundation of a real middle class in the twentieth century. Giving them luxuries like electric lights, refrigeration, and automobiles ... But now, both capitalism and our energy industry are under attack and the hopes of global warming is the dagger.”

It's really pretty impressive -- Whitney drags up just about every myth about global warming except possibly the notion that it's all due to solar flares and volcanoes -- maybe she leaves that out because even those debunked explanations suggest that there is a problem which there isn't. Please go burn some oil right now, for America.

And prepare a seat on the House Science Committee for Lenar Whitney.