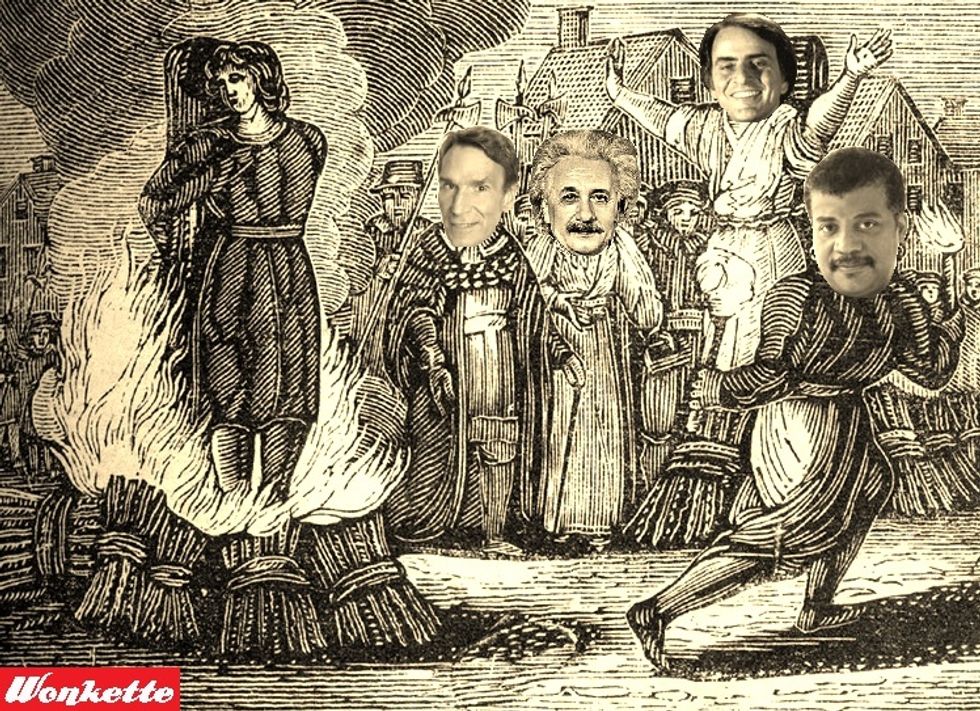 It's spring, so it's time for the Louisiana state legislature's annual competition for who can come up with the stupidest rationale to keep the awful "Louisiana Science Education Act" (LSEA), an anti-evolution law that's been in place since 2008. This year's winner is state Sen. Elbert Guillory (R-Opelousas Doopity Doo), who reminded his colleagues of the horrors of scientific consensus, like back in olden times when scientists were so sure the Earth was flat that they burned nonbelievers at the stake. Nobody expects the Science Inquisition!

The LSEA allows teachers to "supplement" the state's official science curriculum with anything they think might help encourage "critical thinking" about science, which usually turns out to be creationist tracts and the Bible. Every year, members of the reality-based community try to repeal the LSEA, and every year the stupid law gets enough support to hang on. The bill was also the model for a similar effort introduced in Alabama, because when it comes to watering down science education, there's simply never enough stupid to go around. That was the case again this year, as yet another repeal attempt by state Sen. Karen Carter Peterson was defeated last month. But while Louisiana has rejected real science education for another year, at least we can savor this video of Sen. Guillory's alternate-universe history lesson in favor of the LSEA, uploaded to the YouTubes by pro-science activist Zack Kopplin last week.

It's a pretty compelling argument, at least as long as you remember that it's so completely divorced from historical reality that it's not even wrong:

There was a time, sir, when scientists thought that the world was flat. And if you get to the end of it, you’d fall off. There was another time when scientists thought that the sun revolved around the world. And they always thought to ensure that anyone who disagreed with their "science" was a heretic. People were burned for not believing that the world was flat. People were really badly treated. My point, sir, is that not everyone knows everything, and in a school, there should be an open exchange of ideas. Knowledge only grows when people can talk about and have this intellectual back-and forth, this discourse, with all ideas on the table. To restrict ideas, is against knowledge, is against education.

That's awfully persuasive, or would be if anything of the sort had ever happened. In reality, of course, it was scientists who were accused of heresy by the Church for advocating the idea that the earth revolved around the Sun. The Vatican pardoned Galileo for his heresy way back in 1992, and in 2000 said it was really sorry about burning Giordano Bruno at the stake for proposing that the universe might be full of other solar systems (but he also rejected Catholic doctrine as a whole, so they still consider him a heretic). As for actual scientists burning heretics who don't accept evolution, there's not a lot of evidence, although Ken Ham was awfully butthurt when Bill Nye mopped the floor with him in a debate at the Creation Museum.

Props to Zack Kopplin, who interjected after Guillory's appeal to the value of bringing "all ideas" to the classroom, "We don't give teachers the academic freedom to teach 1+1=3." But hey, maybe we should. Can you absolutely prove that mobs of scientists didn't execute people for breaking with their flat-earth consensus? Were you there? And a pat on the back for state Sen. Jean-Paul Morrell, who added that it's usually religious leaders locking up scientists and unconventional thinkers, and that an open exchange of ideas is fine, as long as it's "a logical discourse about things that are provable."

Incidentally, it's probably worth noting that, despite the Church's suppression of Galileo and Bruno, the idea that the Earth was flat had largely died out with classical Greek scientists, well before Christianity ever came along to burn anyone at a stake. The notion that flat-earth belief was widespread in medieval times appears to be a fabrication by Enlightenment writers who took their own pro-science, anticlerical polemics a step beyond historical reality, according to Christine Garwood's 2008 book Flat Earth: The History of an Infamous Idea.

Sen. Guillory has a history of innovative arguments for including non-science in science classrooms; in 2013, he argued in favor of keeping the LSEA by telling the story of how he went to a nontraditional medical practitioner who diagnosed an illness with some voodoo -- literally:

“Yet if I closed my mind when I saw this man — in the dust, throwing some bones on the ground, semi-clothed — if I had closed him off and just said, ‘That’s not science. I’m not going to see this doctor,’ I would have shut off a very good experience for myself,” Guillory said.

So far, Guillory has somehow refrained from requiring Louisiana medical boards to certify voodoo practitioners and other faith healers, which seems awfully discriminatory of him. Where's his devotion to free thought?