Lying Liar Carly Fiorina Lied Many Lies At The Debate, And That's No Lie 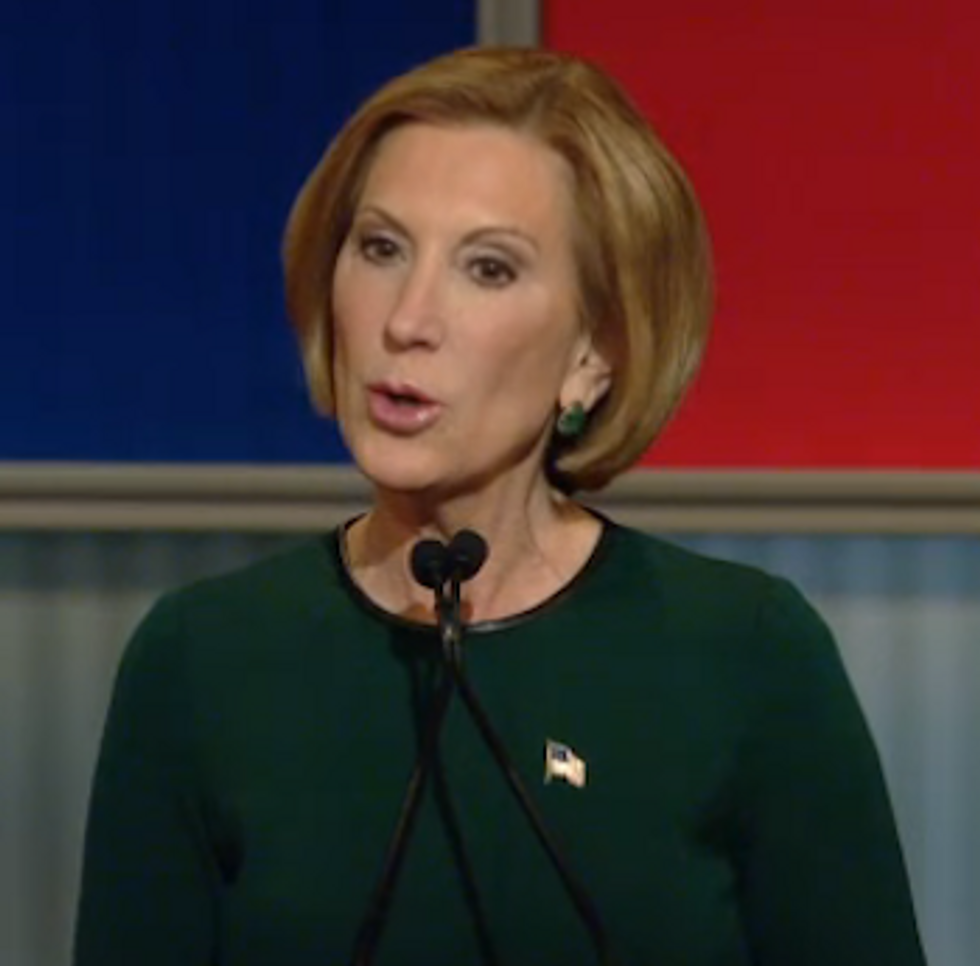 That debate Tuesday night sure was somethin'! It was like, you know, Republicans, on a stage, and they were on the Fox Business Network, and there were questions and even commercial breaks with trailers for Michael Bay's Benghazi!!!!111!! film and desperate pleas that we all buy gold, and oh, our hearts, they were racing!

No, just teasing, it was bad and terrible and not all that different from the evil demon CNBC debate. And, BREAKING NEWS, MUST CREDIT WONKET, the candidates lied a lot, and how can you talk about that without checking in with old Lies-A-Lot herself, Ms. Carly Fiorina? Let's go to the transcript and see what she pulled out of her fib-hole this time!

That time Carly Fiorina and Vladimir Putin were lovers.

Far and away the most hilarious lie came in one of Carly's patented Zingers, directed toward one Donald The Trump, who thinks he's "met Vladimir Putin." As if, Mexican Wall Boy! Carly's met Putin, and it wasn't some kind of "Oh, we were in the green room for a show we were both on." They had a REAL MEETING:

One of the reasons I’ve said that I would not be talking to Vladimir Putin right now, although I have met him as well, not in a green room for a show, but in a private meeting.

Take that, Mister Trump! Except not so much, as the Truth-O-Meter gives that 11,000 wooden Pinocchios and also a couple of Sarah Palins:

Fiorina met Putin for 45 minutes in a green room-type setting, during the 2001 APEC CEO Summit in Beijing, where they were both scheduled to deliver speeches.

Correct as usual, King Friday! When it came Carly's turn to GOP-splain how Obamacare is the worst and causes sickness and death and overwhelming butthurt, she said it like this:

Well, first Obamacare has to be repealed because it’s failing the very people it was intended to help, but, also, it is crony-capitalism at its worst. Who helped write this bill? Drug companies, insurance companies, pharmaceutical companies, every single one of those kinds of companies are bulking up to deal with big government. [...]

The point is Obamacare is crushing small businesses, it is not helping the families it was intended to help.

WHOA IF TRUE. Now we will grant her one thing, which is that Big Healthcare did help write the bill to benefit insurance and drug companies, which is why real liberals like yr Wonkette wanted single payer, but that is neither here nor there, because #liberaltalk and also we have BEEN TRYING THE FREE MARKET IN HEALTHCARE FOR ABOUT ELEVENTEEN BILLION YEARS. More to the point, though: Is Obamacare such a huge failure? Wish we had some facts and figures to find out.

Oh, we do! Here's a study what says more Americans than ever have insurance, for less money than before, and that the people most likely NOT to be benefitting are those who live in states led by Republicans who refuse to fully implement it, HUH!

And here's another one! Oh, and this one says that too, but it turns out it's REALLY great for poors and minorities, and we're not sure if those are "the very people" Carly Fiorina would like to help.

Gosh, it's so easy to find evidence of the good Obamacare is doing, it's enough to make you wonder if Google works on Carly's broken HP computers.

Now, let me just say — let me just say, I know more about innovation and entrepreneurship than anyone on this panel because I have led innovative businesses in the most highly competitive industry in the world for decades.

Then she said something about her "secret sauce" and we threw up to death.

Instead of answering your question, let me tell you a story, and then do a lie!

This was a fun moment. Moderator Maria Bartiromo asked a very mean liberal media question, full of facts and numbers, about how blah blah, President Obama adds an average of 107,000 jobs per month, President Clinton added 240,000 per month, but President George W. Bush only added 13,000 per month, WHATEVER, MARIA, WITH YOUR "NUMBERS." Did Fiorina hear about the awesomesauce new jobs report? How would candidate Fiorina respond to a Clinton saying numbers at her and making jokes about her tanking Hewlett-Packard?

Well, that reminded Carly of a story:

I think about a woman I met the other day. I would guess she was 40 years old.

Blah blah blah, and Carly fired her from HP, LOL just kidding. Anyway, it was a story about a thing, as opposed to an answer to the question she was asked. And then she lied:

Yes, problems have gotten much worse under Democrats.

But wait, didn't Bartiromo just 'splain how there is big job growth when a person named "Any Democrat, Really" is in the White House, and how Not Shit happens when it's a Republican? Nice sleight of forked tongue, Carly! Lie, and say it in a way that makes it sound like you're agreeing with the moderator!

Did she say any lies about Planned Parenthood this time?

NOPE! This was the Fox BUSINESS debate, about important BUSINESS things, and none of the fetuses Carly LITERALLY SAW on that video (that doesn't exist) had MBAs, so it wasn't relevant.

She probably said them to her husband in the car on the way home, though. It's how she does sex foreplay to him, SCIENCE FACT. (What? Yr Wonkette saw it in a video. It was A Icky Video.)