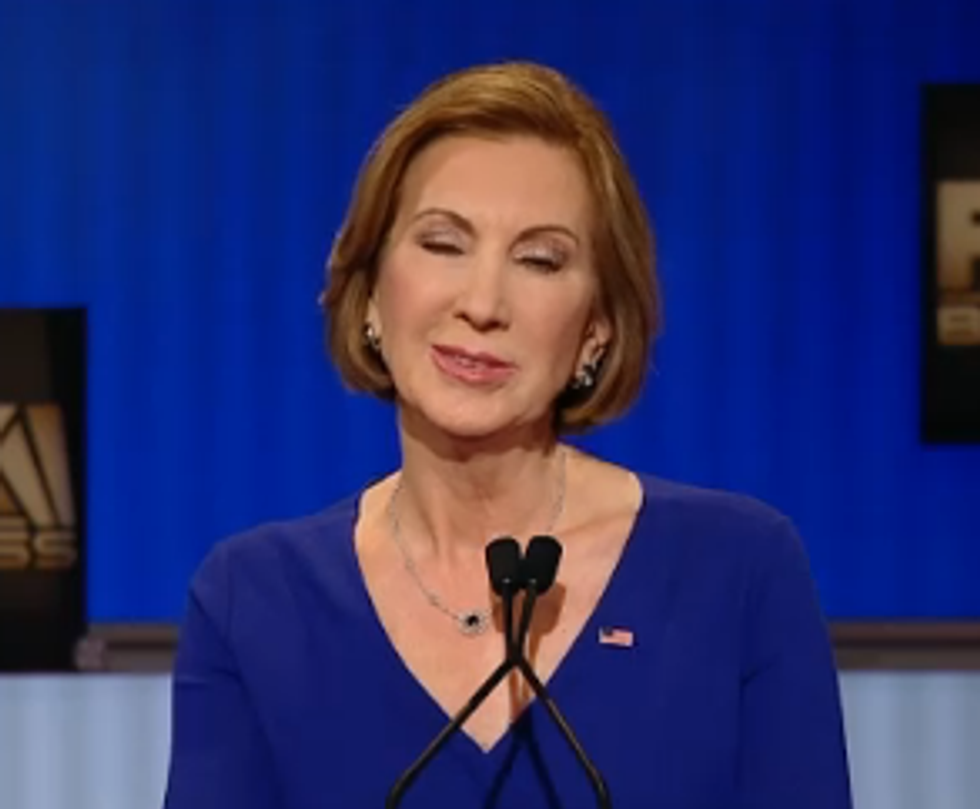 GET THAT "SMILE" OFF YOUR FACE.

And now she has LIED ABOUT JESUS at an Iowa rally, and you know what the penalty for that is? You have to sit on Mike Huckabee's lap in hell when you die, that's what.

I happen to be a Christian. I happen to believe that our Christian values help me as a leader, because they make me humble and empathetic and optimistic. And I think all of those qualities are vital in leadership.

[contextly_sidebar id="DqcglIyxnKf3d9SHt9uvTXgDhTa9qY2b"]Jesus makes her ... HUMBLE? Like when she's wagging her Carly-penis around about how she was the bestest CEO ever to drive Hewlett-Packard into ruin? Like when she's beating her chest about how every Middle Eastern dictator in the entire phone book will take her calls because, like, she knows everybody, and who do you even know, Heather? Like when she brags about how she and Vladimir Putin are best frenemies, because one time he cropdusted her in the green room? If that's "humble" Carly, we'd hate to see "pompous" Carly.

Time for lie number two! Carly was responding to an atheist concerned about all the whiny rightwing Christians who think they should have special rules that allow them to discriminate against people they don't like, and she said this:

[contextly_sidebar id="Rs506eo087X4zCkWLpb2YivlfIhPdKVJ"]As to the specific case she's citing, yr Wonkette has been over it. First of all, it's the Little Sisters of The Poor who are suing the government, not the other way around, CARLY. Second, the Little Sisters have all the liberty in the world to practice their faith, but they're suing anyway, to get out of having to fill out a form that says "Wahhh, we don't want to provide slut pills to employees because we think slut pills kill babies, even though we are wrong about that too." Nobody is stopping them from all the praying and good-doing parts of their faith; they just have to sign a piece of a paper regarding health insurance they provide is all.

[contextly_sidebar id="m91ApQ3c9pOas4r6FfwlsQarzXCG16G7"]And as to the greater theme at play here, the idea that "religious liberty is under assault," well, we've covered that enough that you know it's bullshit too. Whether it's Kim Davis crying about, oh god, filling out a marriage license, or all the Christian cake bakers and candlestick makers and pole smokers who don't want to make cake for the homosexuals, the common thread is that they are all whiny buttcrack morons convinced they're going to hell if they're not allowed their special right to discriminate.

Those people aren't "practicing their faith" when they act like that. They're just being assfaces and poor excuses for Americans, which makes Jesus very, very sad.

This has been another episode of Carly Fiorina Lies About Thing.