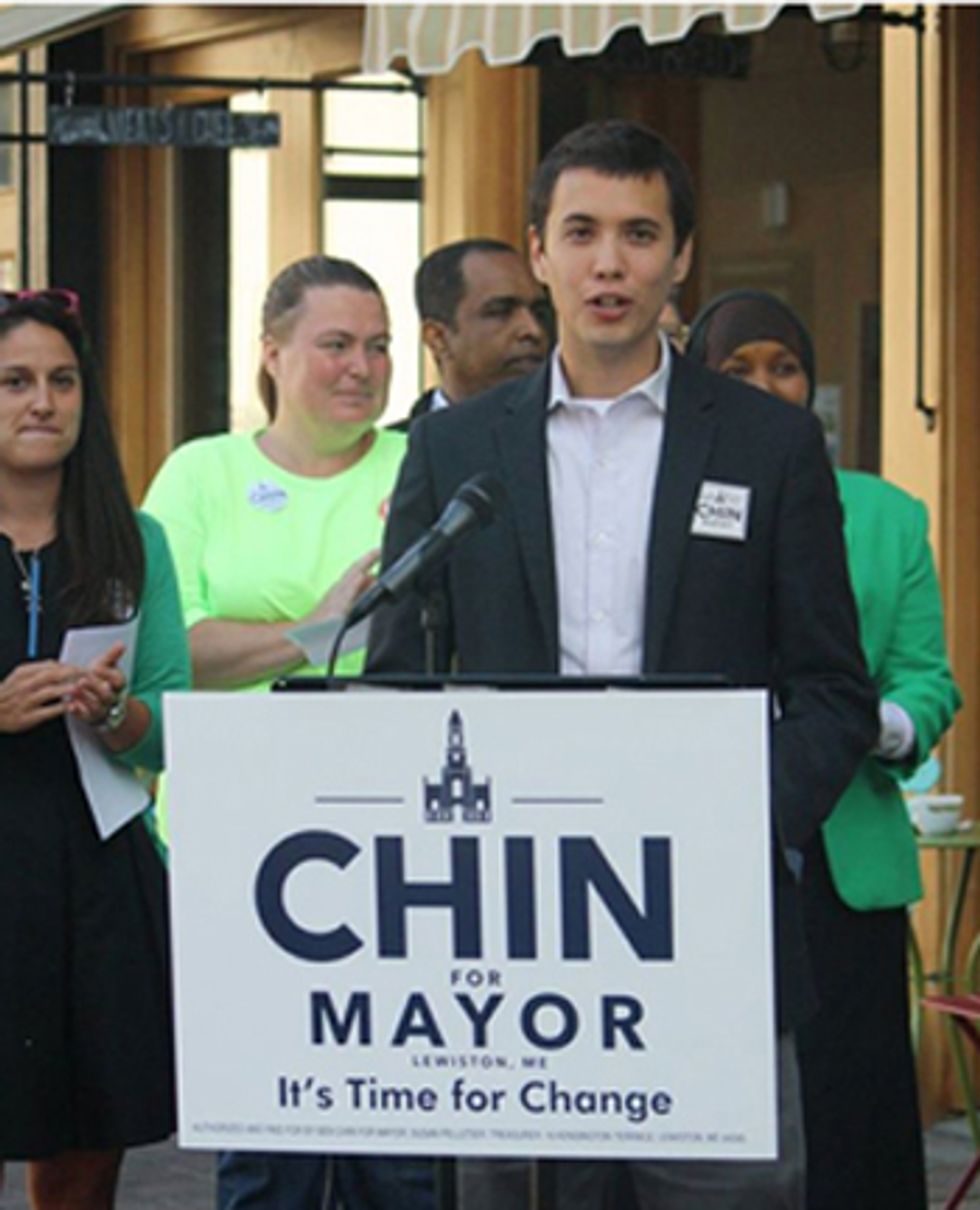 The signs came down, but the campaign went crazier

The mayoral election in Lewiston, Maine, has gone from ugly to downright weird, with the state GOP accusing Democratic candidate Ben Chin of being "anti-Christian" -- which will be something of a surprise to Mr. Chin, who serves as a lay preacher at his Episcopal church. Chin is running to replace incumbent Mayor Robert Macdonald, who is seeking a third term; in last Tuesday's election, Chin won the most votes in a five-candidate field, but not the clear majority needed to win. Macdonald took second place, and the two will face each other in a Dec. 8 runoff.

[contextly_sidebar id="dqiS8XUbmiGmBMtkay0q7u2DVDXwDfAj"]Macdonald supporters have accused Chin of being a Marxist socialist monster who wants to burn down the entire city, creating a foofaraw by posting signs with a racist caricature and comparing Chin to Vietnamese communist leader Ho Chi Minh. You know, because one Asian socialist is the same as any other. And the state Republican Party sponsors a Tumblr blog that depicts Chin along with an image of fires in Oakland, California, during the Occupy protests:

The inevitable result of electing Democrats.

Shortly before the election, that blog added a post breathlessly claiming that Chin favors "Welfare for non-citizens!!" (i.e., assistance for refugees while their cases are adjudicated, but why go into the details?), and has added this shocking exposé of Chin's supposed views on Christianity:

Obviously, this man hates Christians and their churches, doesn't he? If you want to get all technical about it, the passages are cribbed, out of context, from a 2010 sermon Chin gave as a lay preacher at Lewiston's Trinity Episcopal Church. In context, Chin was calling on Christians to be more Christian, which is something sermons have been known to do now and then. Yes, he's criticizing Christians: rightwing Christians, to be specific, who have a habit of using faith as a weapon in the Culture Wars.

Most recently, Maine state Rep. Lawrence Lockman, apparently taking his cue from the Tumblr blog, ranted in a Facebook post that Chin is "an anti-Christian bigot," explaining that "Chin hates America, hates Americans, and hates Christians, and he wants to allow non-citizens to vote." Lockman also called the Maine People’s Alliance, a progressive organization that Chin works with, a "criminal street gang" and "a group of young Bolsheviks who engage in burglary, bullying, intimidation, and criminal trespass." Perhaps they stepped off a sidewalk during a protest? (All of that invective was embedded, for what it's worth, in a post in which Lockman praised Pat Buchanan for a column fretting about how Europe is being overrun by scary Muslims.)

Chin, like some kind of cultural Marxist social justice warrior, pretended he actually is a Christian, even though he criticized other Christians, which as everyone knows is only allowed to be done by conservatives when they're informing liberal Christians they aren't even real Christians at all. In a statement, Chin said:

I’m a Christian and I’m happy to discuss my faith with anyone, particularly the role faith has in policy and public life ... Rep. Lockman and the Republican Party, however, seem to be more focused on twisting faith into a negative attack. I don’t mind. I’m reminded of Matthew 5:11: "Blessed are you when people revile you and persecute you and utter all kinds of evil against you falsely on my account. Rejoice and be glad, for your reward is great in heaven, for in the same way they persecuted the prophets who were before you.”

Episcopal Bishop Rev. Stephen T. Lane issued a statement of his own, confirming that Chin is a "faithful Episcopalian and a member of Trinity Episcopal Church," and emphasizing that Chin serves in the local church leadership and "continues to be licensed by me as a lay preacher." Rev. Lane added: "Spirited public discourse is an important part of our civic life. Personal attacks on the character, ethnic origin, or religious beliefs are not."

For its part, the Maine Republican Party isn't backing off, and insists that even if he said all that blasphemy inside a church, Chin's the one who has a lot of 'splaining to do for his offensive attacks on Christianity:

"He can go ahead and explain the context if he wants," said Jason Savage, executive director of the Maine Republican Party. "We are not disputing where he made them, but we want him to explain himself."

[contextly_sidebar id="tK2sVxfZrB5IXrffbiHWM3wuuo78qOCd"]Chin's opponent, Mayor Macdonald, the nice man who thinks the state of Maine should put welfare recipients' names and addresses online, just like sex offenders, insists he doesn't know anything about either the GOP blog or Lockman's Facebook post. He even says that he doesn't have a computer, which is a rather odd thing for even a small city's mayor not to have.

"I'm just trying to run my own campaign about Lewiston and what's going to happen here," Macdonald said. "I don't know what the GOP is doing and I don't even care to see that website. I'm doing my own thing and I don't want to be taken off the path by this foolishness."

We suppose you call that taking the high road, although we notice that he's not exactly condemning any of those statements, either. MacDonald is certainly not going to get involved in something so controversial as actually saying that his opponent really is a Christian, after all.