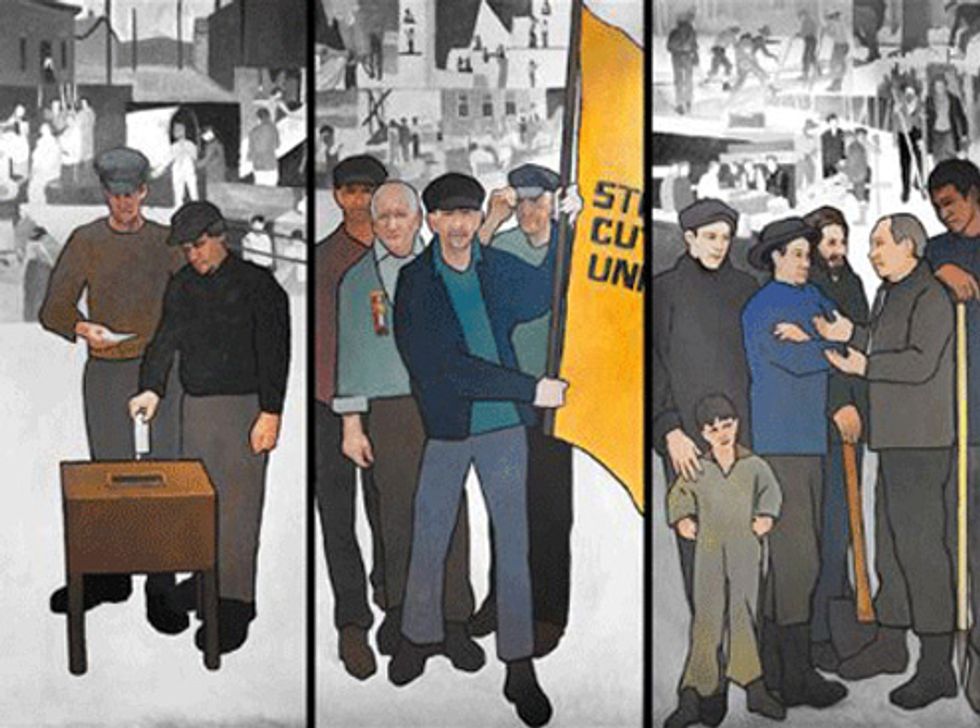 Still don't believe it's a full-on war against workers?It is: "Gov. Paul LePage has ordered the removal of a 36-foot mural depicting Maine's labor history from the lobby of the Department of Labor. Worker advocates described the move as a 'mean-spirited' provocation amid the administration's high-tension standoff with unions." LePage is the new GOP/Tea Party governor who squeaked into office with 38% of the vote. And, like Scott Walker and another dozen Kochsuckers waging class war against American Workers from the statehouses, LePage is trying to break up what's left of the unions and push everybody down to poverty just like his corporate backers want. No rights for workers, and to hell with anyone who complains -- unless by "anyone" you mean "a billionaire industrialist who writes nice fat checks, for libertarians."

The mural is a 36-foot-long scene of workers and labor battles that is housed in the Department of Labor.

So what reason is LePage's kochsucking spokesperson giving for the incredibly cheap, mean-spirited attack on a piece of public art in the Labor Department honoring the basic rights of regular Americans to earn a fair wage for their labor?

According to LePage spokesman Dan Demeritt, the administration felt the mural and the conference room monikers showed "one-sided decor" not in keeping with the department's pro-business goals.

"The message from state agencies needs to be balanced," said Demeritt, adding that the mural had sparked complaints from "some business owners" who complained it was hostile to business.

Paul LePage needs to be yanked out of his office by a bunch of pissed-off grim-faced yankees, tarred and feathered (this hurts!), and sealed inside one of those display canoes at the back of the L.L. Bean. But, well, nobody's going to do anything. At least somebody's proposing a replacement mural showing the proud history of Maine industrialists and their proud use of child labor and their proud maiming of workers in unsafe factories, etc. [Lewiston Sun Journal via Wonkette operative "Matt N."]