Malia Obama Kicked A Girl, And The Daily Caller Is ON IT 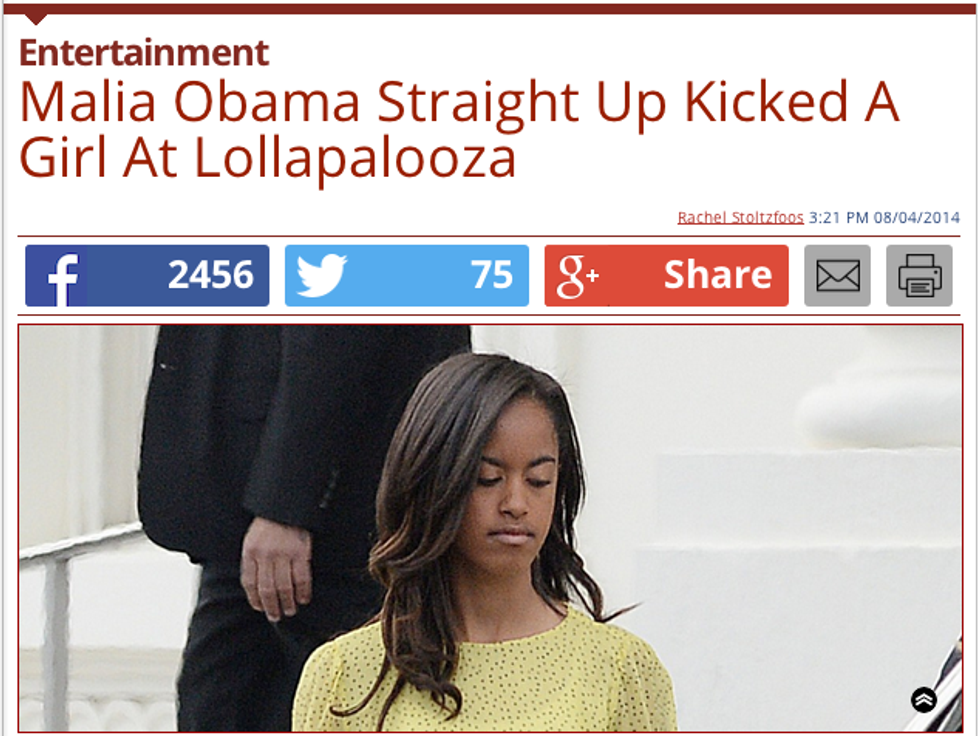 Here is a very good "entertainment" post,"Malia Obama Straight Up Kicked A Girl At Lollapalooza." It is from the Daily Caller. We present it to you in its entirety.

Malia Obama kicked a (presumably) American citizen at Lollapalooza, and not only did the Secret Service fail to act, the kicked victim was happy about it.

Bridget Truskey was minding her own business at the music festival, when the president’s daughter kicked her. “It was awesome,” Truskey tweeted, apparently dangerously unable to see past the stars in her eyes:

I got (accidentally) kicked by Malia Obama today at Lollapalooza. No lie. Malia. Obama. It was awesome. #lollapalooza

Where was the Secret Service?

We have some issues with that perfect pearl of a post. Do you too? First, nice "presumably" about the American citizen part. That is almost as good as the time our nephew got arrested for armed robbery at a Taco Bell, and our colleague at our old newspaper posted the news with the note that our nephew was no relation to us. HE HADN'T EVEN EMAILED TO ASK. OF COURSE our nephew is an armed Taco Bell robber, that should just be obvious!

Our second issue with this story is that it's fucking dumb. Oh, sure, they're probably being ironical about it -- the right is so good at ironicalness. We have nothing more to add to that as the statement is clearly "true."

Our fourth problem with this story is don't read the comments. We know 88 words is a whole lot of words for a Daily Caller reader to process, but you'd be amazed how approximately zero percent caught the "accidentally" following the "kicked." Why is Malia Obama going around kicking people? Why didn't Michelle not spoil her children so they don't kick people? Does Malia Obama have anger issues, with the going around kicking people like a brat and her mom? LATE UPDATE! At least one person did see the "accidentally," and is calling her lawyer and the cops anyway.

Totally classless... for anyone to do, much less the First Daughter. How was it "accidental"? Did Malia intend to kick someone else & this girl got in the way? Had it been me, I would NOT have been gushingly tweeting about my "moment with a celebrity". I would have called the police & then my lawyer.

Exactly, LisaCBrown, who gets kicked in a crowd? No one, that is who, unless Malia Obama straight up kicking people. Go to JAIL Malia Obama, go directly to JAIL.

[DailyCaller, whatever, via Wonket operative "Steverino"]