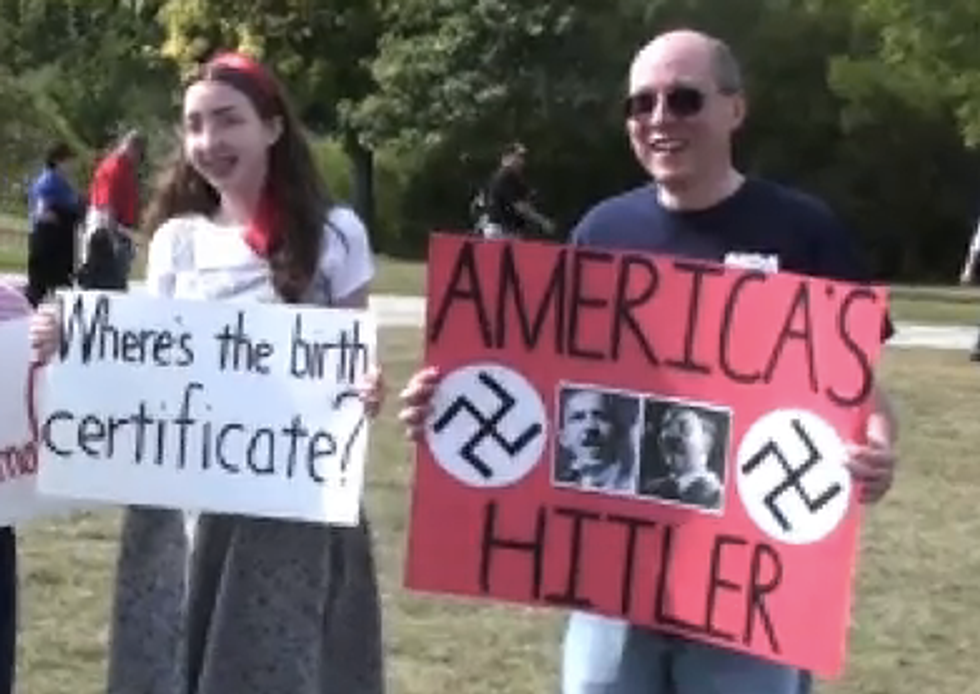 This weekend, in the largest protest in all of American history, millions of Americans joined together to march against the inauguration of Donald Trump as President of the United States. It was lovely, though not quite as lovely as not having Donald Trump for president would have been.

Naturally, there were those who were not too thrilled about it. Many Trumpists went around being all "It's just not fair that you won't even give him a chance! He's your president now! He won! He deserves a CHANCE! You lost! Get over it!" Joining this crowd was none other than the precious Tomi Lahren, who was appalled -- simply appalled -- that all these people would dare to protest a man elected by millions of "hardworking Americans."

"Yeah, let's talk about that Women's March on D.C.! The whole idea started the day after the fair and free election of President Donald Trump. See, some -- THE SNOWFLAKES -- were so taken aback by the result they felt they must do something. Something constructive? No, not really. When they finally stopped crying, they decided to plan a march in Washington D.C. For what reason? To show little girls around the country that they too can play the victim card, they too can have their greatest contribution to society be whining about the election, they too can aspire to protest a man and a presidency millions of other hardworking Americans, male and female, elected into office. Wow! What a message of empowerment!"

Oh man! Oh jeez! What kind of horrible, terrible SNOWFLAKE would go and protest someone who had just become President of the United States? Man, it must have been all those trophies we got for not winning things, which we all still very much treasure and keep in the cabinet with our good china. Next to our gold-plated victim cards!

If only we had some kind of helpful blueprint to show us how non-snowflakes react to someone they don't like becoming president!

WAIT! I know! Didn't the non-snowflakes just live through eight years of a president they didn't much care for? Well! Let's do a flashback to see how Real Americans who are not delicate and whiny like we are handle things!

The year is 2009! President Barack Obama has just been elected into office by millions of Americans. I wonder how those who did not vote for him reacted? Judging by the way they're talking now, it seems like they immediately accepted his authority and legitimacy as president, gave him a chance, and never said anything bad about him, because they are patriots and he was the president. Probably, also, they realized they lost, and decided to look at things from our perspective for a while!

Let's take a look around, shall we?

Welp! Here are some Tea Party protesters in April of 2009, talking about how President Obama was not born here. Sort of like how our current president used to do! Talk about gracefully accepting a loss!

I bet mostly those who opposed President Obama treated him with respect! All classy-like! Not like us snowflakes!

Tomi later laid into the whole feminist movement and the left, for refusing to tolerate intolerance and calling people bigots just because they say and believe bigoted things.

"But it's not just the marchers, it's the feminist movement and really the collective left, who preach tolerance and understanding but only for those people and issues they believe in. Meanwhile, they point fingers at Trump or Trump supporters and label us all bigots with their cardboard signs, their hashtags and their exclusive moral ground we're just not good enough to stand on. Well, bull!"

Similarly, one of the things many Trumpists have been particularly upset about is the fact that we supposedly keep suggesting they are Nazis, just because a lot of neo-Nazis happen to support Donald Trump and feel that he is a good thing for their movement. How is that even fair? Who would DO such a thing? We can hardly imagine! Let us travel back in time, again, to when Obama was elected President. Bet we won't see any of that nonsense!

Yep! Nothing to see here! Oh! Also, conservatives have definitely not been using the term "feminazi" for literal decades either. Nope. And they have always been very kind to us, and tolerant of our views, and simply wish that we would do the same.

It is just too bad that we have not followed the good example set for us by Republicans who opposed President Obama -- and, naturally, immediately stopped doing that the minute he was elected president. Who accepted his election with grace, and dignity, and the same absolute deference they are hoping we will now show the man they just elected.