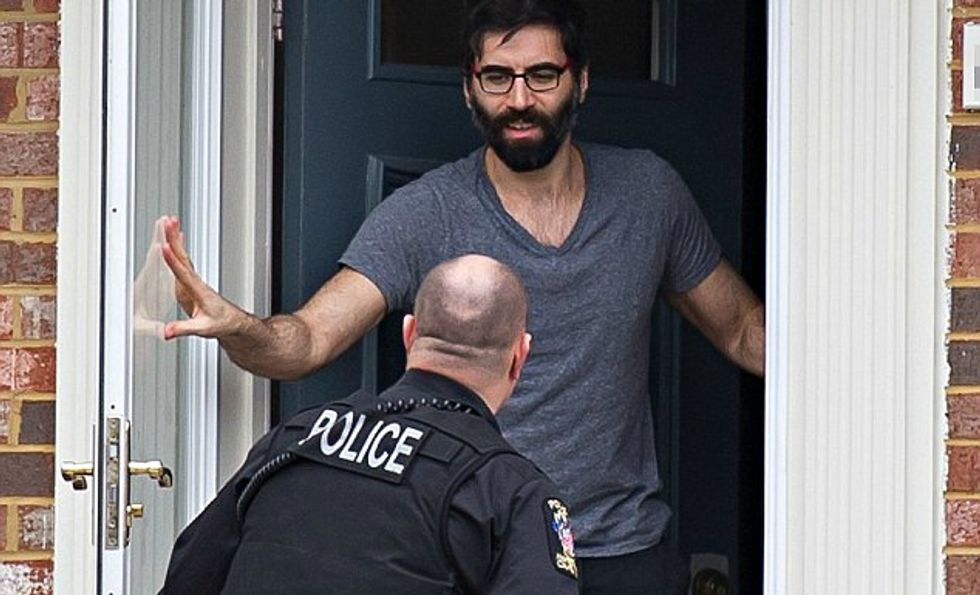 This photo of Roosh emerging from his mom's basement will never get old.

Oh hey! You guys remember Roosh V, right? He is the creepy pick-up artist dude who told all his fellow Trump supporters not to sex up ladies who hate Donald Trump, and we laughed and laughed because we are totally cool with Trump supporters not trying to bang us? And who was also pretty sure that educating women in other countries was a conspiracy meant to deprive him of a suitable wife? And also the one who lives with his mom? And writes other stuff telling his followers that they should only marry virgins, because there are many sexy, compliant, sandwich-making virgins totally lining up to save themselves for gross dudes who read misogynistic pick-up blogs on the internet and say things like "cuckservative"?

YEAH YOU DO Because he and I are friends!

I still don't understand why he bothered to make it black and white.

Anyway! He is sick and tired of all this biased reporting against Donald Trump! You know, like the kind of biased reporting that quotes him verbatim on things and goes with the most obvious interpretation, instead of assuming he meant the totally non-obvious thing he claims he meant several days after the original thing he said was reported. Yes, that kind. That kind is the WORST. Thus, he is going to compile a list of all the "journalists" who have wronged Trump, for the purpose of tainting their reputations until the end of time! And it shall be cleverly called OPERATION EYES WIDE OPEN.

He is encouraging his readers to use the Return of Kings Wiki to "create permanent pages on journalists to display their hoaxes, lies, and lack of credibility for the public record. The archive will persist beyond the end of their lives."

WOAH. That is quite a threat! So far the list includes Chuck Todd of NBC, Lloyd Grove of the Daily Beast, Katy Tur of NBC News, and Megyn Kelly of Fox News. Here is the entry for Kelly, which will for certain be taken seriously by anyone who is concerned about journalistic ethics:

MSM female "journalist" Megyn Kelly, though already famous within the USA at that time, shot to world-fame in 2016, by savagely (and unfairly) going after candidate and businessman Donald Trump. She used her powerful position in FoxNews, and her (pre-wall but still strong) sex-appeal, to draw sympathy from idiots and other white knight types, while piling attacks and pitiful slanders on D. Trump. She thus became the idol, wet-dream and symbol of cuckservative men.

It is doubtful that Megyn Kelly actually stole many votes from Trump (with her FoxNews rants), but she probably did harm, temporarily and just a little bit, his campaign. It has been surmised and proposed by manosphere analysts, that she might be in love with Trump, or at the very least secretly excited by him: her hysterical behavior being a typical manifestation of the frustration of her female psyche.

Roosh believes that these manosphere-lingo heavy Return of Kings wiki entries will serve to discredit journalists who go after Trump, and he aims to make entries like this about at least 250 of them.

While it’s quite difficult to hurt the owners of media outlets, it’s easy to put the squeeze on the lowly journalists at the bottom, whose reputation and livelihood is sensitive to public perception. By using a wiki platform to truthfully show their misdeeds, we can erode public trust in them over time, an attack method that is slower but deadly.

Surely, the public will lose their trust in these people once they see that a website with recent articles like "Ugly Minority Girls Are Winning Beauty Pageants To Satisfy The Diversity Agenda" thinks they are biased and corrupt.

Of course, Roosh isn't just doing this for Trump, but also for himself and his audience. Because what hurts an alpha male like Donald Trump also hurts them!

Besides the urgency of the upcoming election, Trump is the representation of a masculine and nationalist standard. If a journalist has bias against Trump, it’s an absolute guarantee that they’re also against us, and probably even participated in the meetup outrage earlier this year.

That is probably a fair assessment, and I don't think anyone would have a problem with that characterization! I think it would be difficult for almost anyone outside of this cultish group to not find them completely freaking bizarre. And, quite frankly, a little sad.

This all being said, I wish them the best of luck on this venture, and am sure they will totally discredit all the journalists who are not nice to Donald Trump or weird internet misogynists.