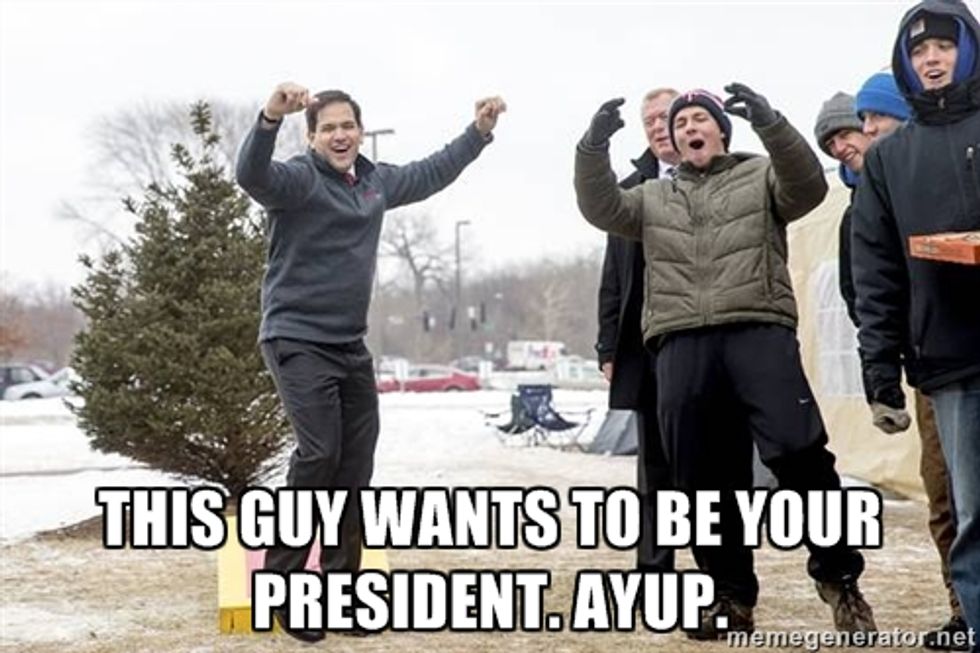 Marco Rubio's sassy little boots have a point to make again, about guns, again. See, Donald Trump made a YOOOGE LOL this weekend when he said, "I could stand in the middle of 5th Avenue and shoot somebody and I wouldn’t lose any voters, OK? It’s, like, incredible." Hahahaha it was so funny, because he was calling them stupid to their faces, and they are so stupid they didn't know that.

So Rubio (naturally) piggybacked onto some of that Trumpmentum to say, aw shucks, Donald, you probably shouldn't shoot people, but isn't it so sad how in Obama's America common New Yorkers like Donald J. Trump are denied the God-given right to stand in the middle of 5th Avenue and shoot each other in the face?

"It's probably not a good idea for him to do that and I would not recommend that he do it but you know ... that's Donald," Rubio said, and then broke into laughter.

Amused by his joke, Rubio jumped in the air and clicked his feets together and a jolly time was had by all. He continued:

"The bigger problem in New York is, it's almost impossible to even have a gun and protect your families, so that's why it's so important our next president be someone who defends the Second Amendment," Rubio said.

Is it really IMPOSSIBLE to even have a gun in any place in the entire US and A? Think Progress says New Yorkers have to pass tyrannical background checks and aren't allowed to have the big assault-type shooty-shooties that are so popular with Kids These Days (the ones who are mass shooters anyway), but otherwise guns are perfectly legal.

[contextly_sidebar id="BoNckl1AiUkG5Ye2eZnlsLdGZmsQjvVl"]Maybe Rubio is worried all the gun stores in New York are out of stock, because gun-humping weirdos can't stop buying them due to their constant paranoia over Obama taking them away.

Or it COULD BE that Marco Rubio is simply a moron. Maybe he's really scared for the New Yorkers right now, since he read on WorldNetDaily that the city is under martial law right now, on account of all the snow. They probably would appreciate some guns right now! Fact-check: New York City is not currently under martial law.

[contextly_sidebar id="QHvTKltSCPEBGUbeBPaHi5vG2wku3yXJ"]But, but, but, even if it isn't, Marco Rubio knows ISIS is literally going to attack all the families of America any day now, which is why he bought a gun on Christmas Eve, just in case ISIS knocked on the door that night to sing "Jingle Bells" and do Islamofacsistic terror to his family under the mistletoe.

The point is it's a real shame New Yorkers like Donald Trump don't have the freedom to play High Noon on 5th Avenue, because Thanks Obama. When Marco Rubio is president (LOL) he will make sure Trump gets to shoot all the faces he wants.