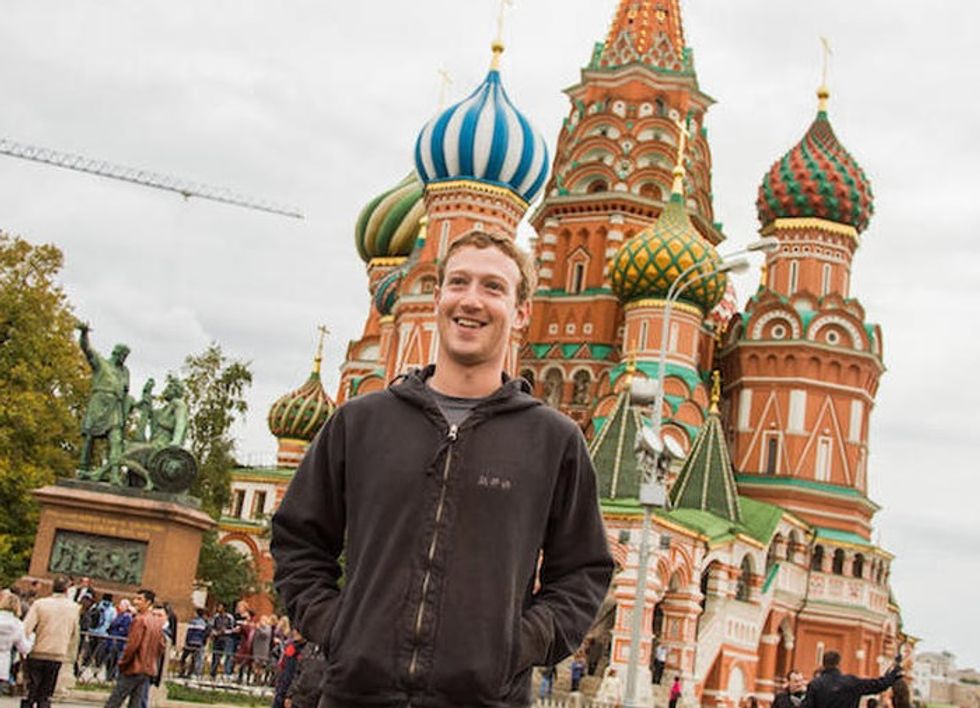 Not that he's a Russian pawn just because he went to Moscow. Lotsa people go to Moscow. LIKE HITLER!

Facebook has agreed to turn over thousands of documents to Congress related to that little bit of Russian ad-buying during the 2016 election, which we learned also involved all sorts of fun internet hijinks, like not just ads but also attempts to organize anti-immigrant rallies as well as pro-Trump rallies in Texas (no takers) and pro-Trump flash mobs in Florida -- with some success. How could Facebook have known that the people paying for US political ads in rubles were Russian?

But now Mark Zuckerberg says he's real sorry and Facebook will be taking a bunch of steps to make sure political ads get some kind of scrutiny from the company:

He sounds so sincere and nerdly! And he really wants Facebook to remain a "force for good for democracy," like how it's a force for good in making your easily frightened relatives scared about rampant gang violence in Boca. You can see this is a man who's scared of Burdensome Government Regulation, that's for sure:

"As a general rule, we are limited in what we can discuss publicly about law enforcement investigations, so we may not always be able to share our findings publicly," Zuckerberg said. "But we support Congress in deciding how to best use this information to inform the public, and we expect the government to publish its findings when their investigation is complete."

To help make sure political ads on the platform are more transparent-ish, the ads' buyers will soon have to identify who's paying for the ad, just like on TV, so get ready for some slick organization names like "The American Friendship Committee of The International Peace, Yes?" and "Completely Ordinary Nebraskans for the Great Leader Putin." Of somewhat more use, when Facebook users to go to any group's Facebook page, they'll be able to see all that group's ads, so if they're running a "Fluffy Bunnies for Clean Air" ad on the Cute Pets page, you can see the group's ads for "Bring back coal mining in the Grand Canyon" too.

Zuckerberg cautioned that while political ads will receive more scrutiny from human workers, that won't involve checking "what people say before they say it":

"Freedom means you don't have to ask permission first, and that by default you can say what you want. If you break our community standards or the law, then you're going to face consequences afterwards," he said. "We won't catch everyone immediately, but we can make it harder to try to interfere."

Not that Facebook really needs to be bothering with any of this nonsense, since Donald Trump happens to know it's fake news anyway:

Facebook will also be partnering with election commissions in the US and around the world to make sure ads are on the up-and-up, and has already been working with Germany in advance of this weekend's parliamentary elections:

Zuckerberg said Facebook has removed thousands of fake accounts and has examined the activity of each to see if there was an effort similar to the one allegedly used to undermine the United States presidential election last year. So far, there hasn't been any evidence of this in Germany, he said.

Should Facebook Go The Fuck To Jail For Helping Russia Elect Trump President? Or For Just Being Facebook In General?

Russian military intelligence spent some DOLLA BILLS on Facebook ads to fuck with the 2016 election. WHOA IF TRUE!

That ought to be a huge relief to German elections officials, especially given that in May of this year, when Time ran a huge piece on Russian operations to disrupt our elections, Facebook said pretty much the same thing:

Russia plays in every social media space. The intelligence officials have found that Moscow’s agents bought ads on Facebook to target specific populations with propaganda. “They buy the ads, where it says sponsored by–they do that just as much as anybody else does,” says the senior intelligence official. (A Facebook official says the company has no evidence of that occurring.)

It's starting to look like Facebook's complicity in helping Russia get Trump elected is VAST.

But this time, with Facebook looking a lot more closely and weeding out lots and lots of troll accounts, Germany should have nothing to worry about, since there's no evidence those trolls come from anywhere in particular. You can't get too paranoid over this stuff, or you'd just lose trust in everyone, like that nice gent from Nambia who wants to help you recover millions of dollars.

Yr Wonkette is supported by reader donations. Please click right here to help us out. Also to be enjoying our the Facebook page, very much!