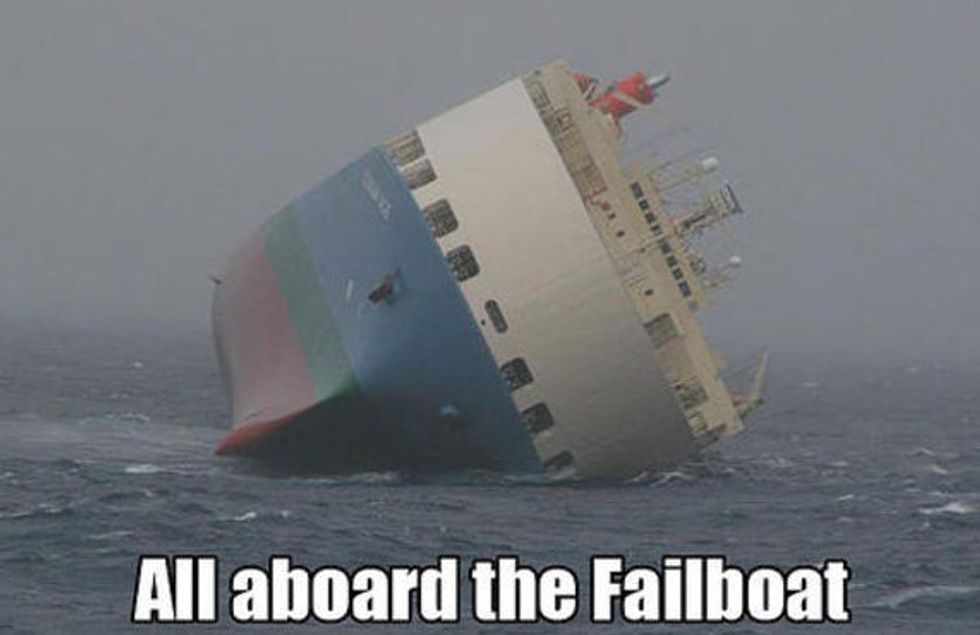 The ship has really hit the fan this time

Marriott had a chance to do some first-class Hurricane Irma BOAT HERO stuff when they chartered a ferry to pick up stranded tourists from St. Thomas and bring them to Puerto Rico Friday night, but the wheels of Corporate Stupid interfered, so now the hotel chain looks like a bunch of schmucks. The idea was to rescue Marriott guests who couldn't evacuate by air before the hurricane hit the U.S. Virgin Islands, but the ship only allowed those who were registered guests of Marriott hotels or resorts to board, leaving behind about three dozen people who weren't on the list -- on a devastated island with food and water in short supply, with another hurricane on the way.

Marriott says local port officials wouldn't let anyone not on the passenger list board, while people left behind on the dock say the local authorities were urging the ship's crew to take everyone, but corporate higher-ups refused. The Washington Post doesn't include any direct comment on the situation from port officials, probably because HURRICANE and everything. We'll go with a default assumption that the company is covering its ass.

“We just felt hopelessness,” said Cody Howard, a professional storm chaser who had been contracted to shoot weather footage on the island. His exit strategy evaporated when the island’s airport closed.

"We’re grown men. We could take care of ourselves,” he said of himself and his chase partner. Howard had endured similar conditions filming footage of Hurricane Harvey. “We didn’t need a whole lot. But it was really hard to see people with kids and elderly people who don’t have anywhere to stay get turned away by this boat … For some people, that was the only [glimmer] of hope. After the boat left, they just felt hopeless and helpless.”

Howard and others said the people running the ship had contacted Marriott higher-ups about whether to evacuate the people who hadn't had the good taste to stay at Marriott properties during the hurricane, and that they received word the company "didn’t want the liability," according to Howard. He took to the Facebook to register his disapproval:

Another would-be evacuee, Naomi Ayala, posted a video to Facebook, because if if they won't let you on the damn rescue boat, at least you can tell the internet about the SNAFU:

After speculating someone had turned off the lights so people would leave, an exasperated Ayala says,

They had 600 and something seats. They filled it with 300 Marriott guests and there are 35 people over here waiting and we can’t get on this large boat that will hold at least two to three hundred more people. And it was Marriott’s decision. Marriott did not let us on this boat to get to San Juan so we can get on flights back home. Instead, we have to ride out Hurricane Jose on St. Thomas when we just went through Hurricane Irma.

Christian Prophetess Will Bat Hurricane Irma Away With Her Magic Scepter

Don't worry, Florida! Kat Kerr is ON IT.

As it turned out, Hurricane Jose veered north and didn't hit the Virgin Islands (possibly because it was redirected by the Prayer Warrior lady and her magic jebus stick), but when they were left behind Friday, the people on the dock expected they'd have to face a second hurricane, with very few resources on an already devastated island.

Marriott spokesperson Tim Sheldon told WaPo this is all just a big misunderstanding and their hands were tied, because local port officials said that only those on Marriott's passenger list would be allowed on the ferry, and there just wasn't time to work out whether anyone else could be evacuated:

“We were told by the port manager … that if they weren’t on the manifest that we weren’t able to bring them on to the boat,” he said. “We were told we had to have our boat out of that port by nightfall. We knew that it was in our best interests and in the best interests of our guests to get that ship out of there that night.”

Later, the company also sent a statement with some beautiful WE CARE A LOT corporate-speak:

The ferry departed St. Thomas Friday, September 8, with the Marriott guests onboard. There were a number of additional people gathered at the dock who were not our guests who also expressed a desire to leave St. Thomas. We very much wanted to assist these other travelers to Puerto Rico, however, the Marriott team on-the-ground was told they had no authorization to board additional passengers who were not on the approved manifest. This was enforced by dock security.

With Hurricane Jose on a path to St. Thomas, the ferry had a tight window to pick up passengers and safely depart.

As a company, Marriott places a priority on the safety and security of our guests, but we also have a long tradition of looking out for the greater community. In this case, we weren’t able to help and as grateful as we are that we were able to transport our guests, we are saddened that we were not able to do the same for more people.

You hear that, all you naysayers and haters? They ARE saddened!

That contradicts what passengers who were turned away say:

Howard and others saw it as a case of corporate callousness during a life-threatening situation. He told The Post that local officials were pushing for the tourists to get on the boat — they were using limited resources that could be used by islanders who couldn’t sail away from the aftermath.

Between the people left on the dock and the corporate ass-coverers, Yr Wonkette is going with the people on the dock. But if there's a record of local officials saying "No, you may not take these scared, wet people someplace safe because they are not on your guest list," we'll believe it when we see it.