Martin Luther King Would (DID!) Have A Few Things To Say About American Policing Today 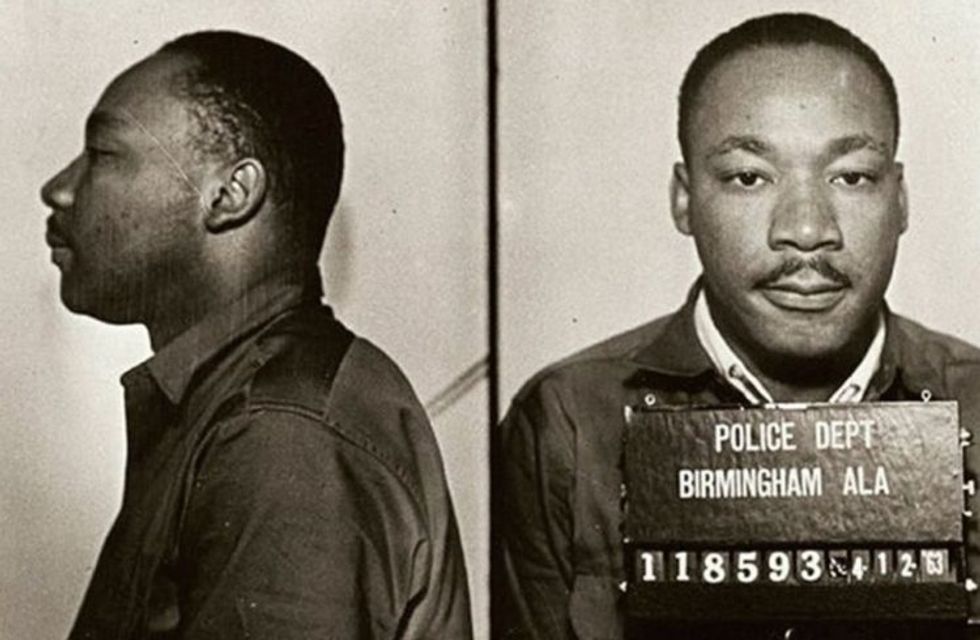 Martin Luther King was murdered 50 years today. In among all the tributes and commemorations -- and the occasional pleasant surprises, like an NPR talk show (audio will be up sometime later) which focused for an hour on King's emphasis on economic justice as a fundamental part of civil rights -- let's take just a moment to reflect on King and state power, as embodied in the police. King was intimately familiar with law enforcement. One of his most famous essays, of course, was written in a jail. But King wasn't merely concerned with the tactical violation of unjust segregation laws, to bring about their demise. He also called attention to the selective and frequently brutal enforcement of laws against black people and communities.

That reality was reflected in a part of King's "I Have a Dream" speech that tends not to be quoted by conservatives who seem to think King said a nice line about not judging people by the color of their skin, so he must have opposed affirmative action. Here's that section:

We got rid of the "Whites Only" signs and the legal discrimination in hotels -- but even now, black people often find themselves more likely to be turned away by Airbnb hosts than whites -- don't worry, though, the company's working on it.

Oh, but the social mobility and the policing and the voting restrictions. And again, the police brutality (we mention it twice, since the "Dream" speech does as well). Dear Christ, 50 years and they're all still very much with us. Over the weekend, a Sacramento County Sheriff's Department patrol SUV hit a 61-year-old woman protesting the police shooting of Stephon Clark, a brutality twofer.

And on Monday, the city of Asheville, North Carolina, released nine police videos showing police beating the living crap out of an unarmed black man, Johnnie Rush, who had criminally jaywalked -- repeatedly! -- then gotten mouthy, and then, worst of all, run away. Clearly, the dangerous suspect needed to be punched in the face, put in a chokehold, and tased:

WaPo explains how this encounter, which occurred in August 2017, came to happen. Asheville cop Christopher Hickman and his partner, trainee officer Verino Ruggiero,

spot Rush walking through the parking lot of a business, which they later describe as trespassing. Then they see him cross the street without using a crosswalk. The officers follow him to a nearby convenience store, then wait for him to buy some beer before confronting him outside the store about the alleged jaywalking. Ruggiero gave him a warning and let him go, but moments later he and Hickman say on video that they see Rush jaywalking “again and again,” which is not captured.

Before the beatdown, Hickman was very pleased with the show of toughness his rookie partner was treated to:

“He thinks it’s funny,” Hickman says. “You know what’s funny is you’re gonna get f‑‑‑ed up hardcore. Get on the ground.”

While Rush is being manhandled toward the patrol car, he says, "You ain’t have to punch me in my face for no reason." Hickman, quite the wit, replies, "You didn’t have to make me,” then adds: “Don’t look at me with your spitty blood face.”

Hickman resigned in January because he was about to be fired for violating the department's use-of-force policy. At least Hickman is looking at serious criminal charges:

He was charged in March with felony assault by strangulation and misdemeanor assault inflicting serious injury and communicating threats for the August 2017 incident. His lawyer says he’s going to trial and that a jury will acquit him.

Oh, yes, and the multiple charges against Johnnie Rush -- "impeding traffic, trespassing, assault on a government official and resisting a public officer" -- were ultimately dropped.

So hooray, chalk up another enormous step forward from 50 years ago. Now brutal cops may get fired or even charged with felonies. Convicted? Not so much:

Between 2005 and April 2017, 80 officers had been arrested on murder or manslaughter charges for on-duty shootings. During that 12-year span, 35% were convicted, while the rest were pending or not convicted, according to work by Philip Stinson, an associate professor of criminal justice at Bowling Green State University in Ohio.

Thirty-five percent convictions over 12 years... Oh, and those 80 cops who were charged? That's out of roughly a thousand police shootings every year, the vast majority of which are are ruled to be justified.

On the up side, the cops have largely gotten out of the business of actually running the local KKK chapter and kidnapping civil rights workers, so we really have come a very long way. Now, police just routinely call Black Lives Matter a terrorist group, and conservatives wonder why The Blacks are so angry for no reason at all.

We don't want to be a total bummer here, so let's close with something hopeful: Barack Obama and John Lewis talking about Martin Luther King:

The other thing King taught, after all, is that reaching for justice isn't easy. But it is the only option.