Martin Shkreli Will Not Shut The Fuck Up! 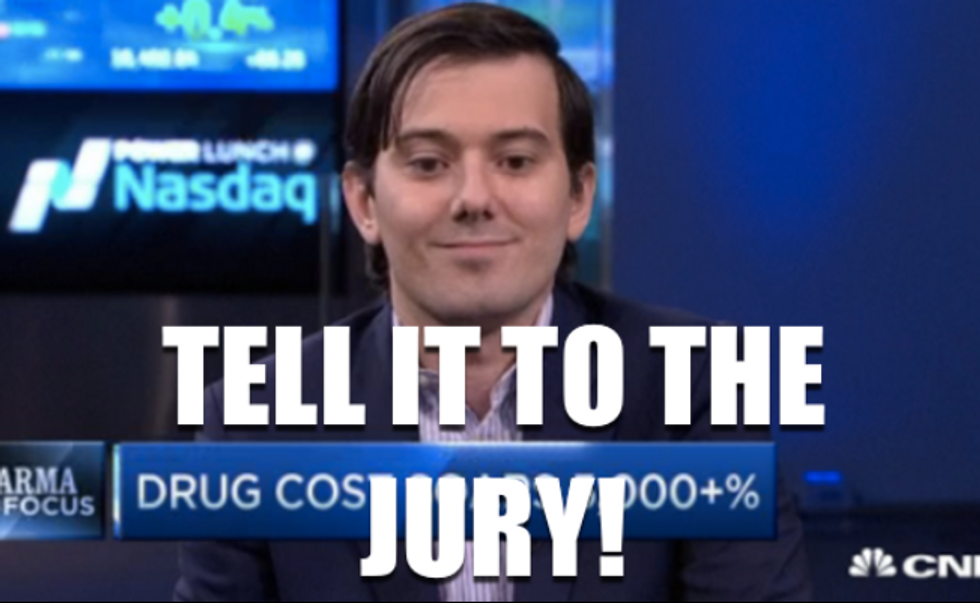 How the hell do you seat a jury when everyone in America wants to punch your client in the face? Are there 12 sentient adults in New York who wouldn't shove Martin Shkreli onto the tracks if they heard the train coming? Pharma Bro hiked up the price of a lifesaving drug for babies and HIV patients by 5000%. He harassed a female reporter so viciously that Twitter finally creaked into action and banned him for life. The guy even managed to start a feud with the Wu Tang Clan!

Shkreli is currently on trial for looting his drug company Retrophin to pay off investors in his doomed hedge fund. It took his wealthy buddies years to realize that the guy they'd handed their money to wasn't A GENIUS ASSHOLE, he was just A ASSHOLE. It took potential jurors about 10 seconds to size him up, according to CNBC.

"In this particular case, the only thing I'd be impartial about is which prison he goes to," said a man in his 30s, who was among those excused.

Another young man said, "Just looking at him kind of twists my stomach, to be honest."

A third man said, "I can't say if he's like totally guilty."

"He's probably guilty," the man added. "No way can I let him slide out of anything. That's my attitude toward his whole demeanor."

"And he disrespected the Wu-Tang Clan, so ... ," the man said, referring to one of the odder chapters of Shkreli's often-odd story.

During several days of jury selection, Shkreli performed his one-man show Maverick Dickhead for anyone who would listen. Standard operating procedure during a trial is to shut the fuck up. But Shkreli surprised a roomful of reporters by wandering in and letting rip on the prosecutors, opposing witnesses, the possibility that he would testify in his own defense, and even his attorney's fees. Per CNBC,

"Pharma Bro" Martin Shkreli, during a surprise visit with reporters covering his fraud trial Friday, criticized the people prosecuting him as the "junior varsity," claimed he never considered taking a plea deal and said people "blame me for everything." [...]

"Do I want to exonerate myself?" he asked a small group of journalists when asked if he had desired to have his day in court.

He only stopped talking and left when his high-powered lawyer Benjamin Brafman peered in the room and asked, "Martin, can I talk to you for a minute?"

Shkreli also bought the domain names of female reporters covering him and sneaked back on to Twitter under the handle @BLMBro. Because har-dee-fucking-har, it's a libertarian douchebag using Black Lives Matter (BLM) as his sock puppet handle.

Back at the courthouse, prosecutors were freaking out. They found the only 12 people in New York that didn't want to beat the shit out of Shkreli, and they were NOT going to let that motormouth sumbitch ruin the trial by tainting the jury with his antics. In fact, Shkreli's lawyer Benjamin Brafman has already requested a mistrial because poor Martin can't keep his mouth shut.

“I understand Mr. Shkreli, God bless him, has brought this notoriety upon himself,” Brafman told the judge. Nevertheless, Shkreli has the right to have jurors who aren’t biased, he said. “This jury has been unfairly tainted.” To buttress his argument, Brafman read from news accounts as Shkreli smiled, jutted out his jaw and hammed it up. [...]

By requesting a mistrial, Brafman is now free to raise the issue of a tainted jury on appeal, should Shkreli be convicted.

Monday evening, prosecutors asked for a gag order to make Shkreli and his lawyer both shut the fuck up already, for the love of God! This put Benjamin Brafman in an odd position. On the one hand, he's obligated to argue that his client has a First Amendment right to say what he likes. CNN reports:

In Brafman's response to the gag order request, he described Shkreli as a man who "is under enormous pressure that is compounded by his clearly frail emotional state." He added that "Mr. Shkreli's comments were not intended to disrupt the proceedings. Rather they are defensive measures taken by him in response to what he perceives to be a highly prejudicial one-sided coverage of his trial."

On the other hand, Brafman is clearly trying like hell to get his client to SHUT. THE. FUCK. UP. NOW. Asked by a CNBC reporter about Shkreli's verbal diarrhea, Brafman responded.

I really think Martin is not going to be speaking to you guys again if he listens to me...I don't think anything Martin says by now is going to affect the case one way or the other, but I would very much appreciate it if he did not talk to the press because sometimes he doesn't have a filter.

Shkreli, referring to himself in the third person, interjected, "He can do what he wants."

Screenshot from The Daily Beast

Yesterday, Judge Kiyo Matsumoto agreed that Martin Shkreli needs to SHUT THE FUCK UP FOR REALS.

Matsumoto also said she was afraid that jurors in the trial would end up hearing what Shkreli said if he continued talking; she was particularly concerned that he spoke to reporters while walking out of court last week after his rant.

"All your client has to do is stop talking in the courthouse and around the perimeter of the courthouse," Matsumoto said. "This isn't going to help Mr. Shkreli in the end."

"I would like to so order the agreement that he will not make comments in the courthouse about the evidence and the witnesses and this also includes the perimeter roads," Matsumoto said.

"I think it's inappropriate and that all the work we've done to select 18 men and women to sit on the jury would be jeopardized if he continued to do this."

But we at Wonkette have given this some thought, and we have A IDEA. We think that Martin Shkreli is just misunderstood by all the lesser muggles. The wisest course would be for Shkreli to make his case directly to the jury.

Tell your story, Martin! Explain to them how that witness is just a greedy bitch who should be grateful you cashed out her investments and put them into your pharma company. They'll only get it if they hear it from you personally!

Take the stand and wow them with your superior intellectual prowess! Explain to the jury that you had nothing to do with those dummy statements your hedge fund sent out to clients after the money had all vanished. They'll know a genius like you doesn't screw around with paperwork. Plus, you're so much smarter than that Brafman guy! That stupid lawyer is always putting you down, calling you "nuts" and "insecure." He's just jealous of your massive brainpower! He'll tell you not to take the stand, but DON'T LISTEN!

Testify, Martin. No jury could possibly resist your charms! JUST DO IT, BRO!

Wonkette is ad-free! You click now for to pay us, please!