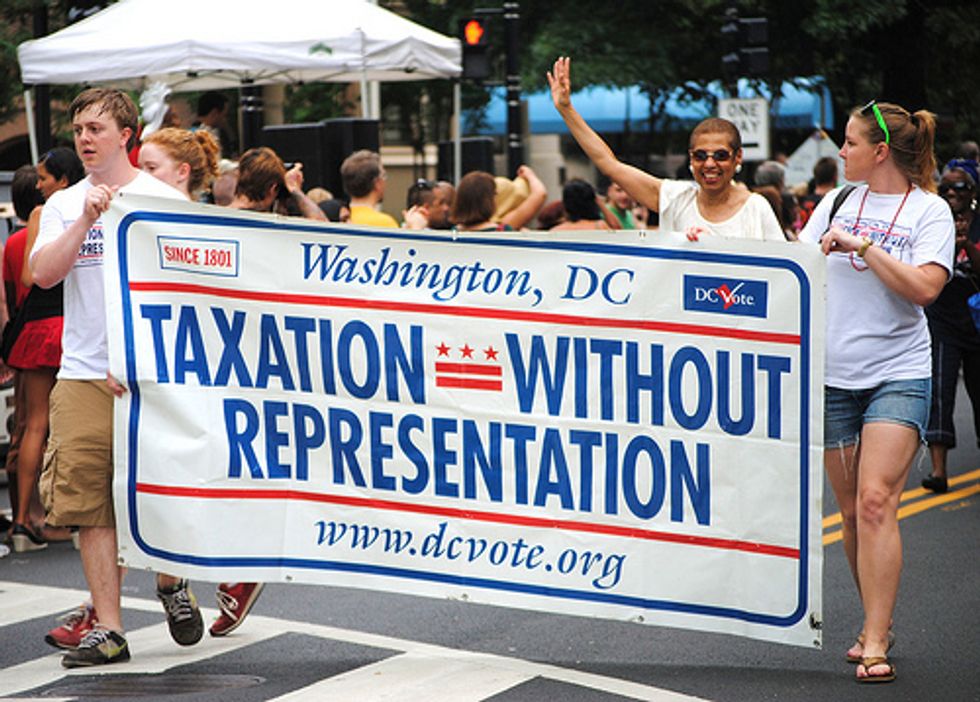 You know what would be a terrible, horrible, no-good, very bad thing for the country? If Washington DC, the only part of the continental United States that currently gets no actual say in the legislative branch of government, got full statehood and/or congressional representation. One congressman has the facts to prove it! This is because he made them up himself.

Rep. Andy Harris (R-MD But The Shithole Part) is clearly very smart and in no way an ambulatory dickfungus. Harris knows things like "duly-elected self-rule" and "the right to life, liberty, and the pursuit of happiness" are for suckers. He proved such in 2014, when he led the congressional charge to thwart DC's dastardly attempts to actually govern themselves by telling city residents nuh-uh, they can't have the decriminalization of marijuana even though 65 percent of them voted in favor of it. This was possible because Congress is allowed to tell DC to go fuck itself any time DC does something Congress doesn't like.

Hilariously, DC responded by adopting the legal doctrine of non, fuckum tu, whereby the city more or less used procedural trickery to give Congress a big ole middle finger and just went ahead and decriminalized pot anyway. For this, Harris has said he thinks DC Mayor Muriel Bowser should be prosecuted, which is a totally sane and reasonable response to a government attempting to carry out the will of its people.

At a recent town hall meeting, Harris again explained why DC residents being allowed to govern themselves like actual Americans would be so very terrible. According to Andy Harris, it's because a lot of them are black people:

In a confrontation with marijuana legalization activist Adam Eidinger, Harris told Eidinger that he did not “think [D.C.] ought to be a state because they make irresponsible decisions like legalizing marijuana when the African-American unemployment rate is 40 percent and the African-American graduation rate from high school is 12 percent.”

Unless they are made-up numbers facts.

"Oh come on, ThinkProgress! What's the difference? Forty percentage points is probably within the margin of error, anyway!" says Andy Harris, probably. (Andy Harris has no idea what that term means.)

We have to give Harris credit (no, we don't) for coming up with such a nakedly racist, condescending pile of lies to justify why he so deeply hates democracy and America and apple pie and your sweet Aunt Mildred. The boilerplate terrible argument against DC statehood usually runs something along the lines of "the founding fathers wanted DC to be politically neutral ground, and they always had such great ideas, like the whole 'black people are 3/5 of a human' thing." Harris, meanwhile, is treading new ground with his revolutionary "LOL THE DUMB BLACK PEOPLES AMIRITE" tack. Terrible, regressive, racist ground, but new ground nevertheless.

We're sure Republicans' persistent opposition to DC statehood has nothing at all to do with the fact that DC votes Democrat in every single national and mayoral election. Heaven forfend.