Mass Shootings Hardly A Problem At All, Except Every Week 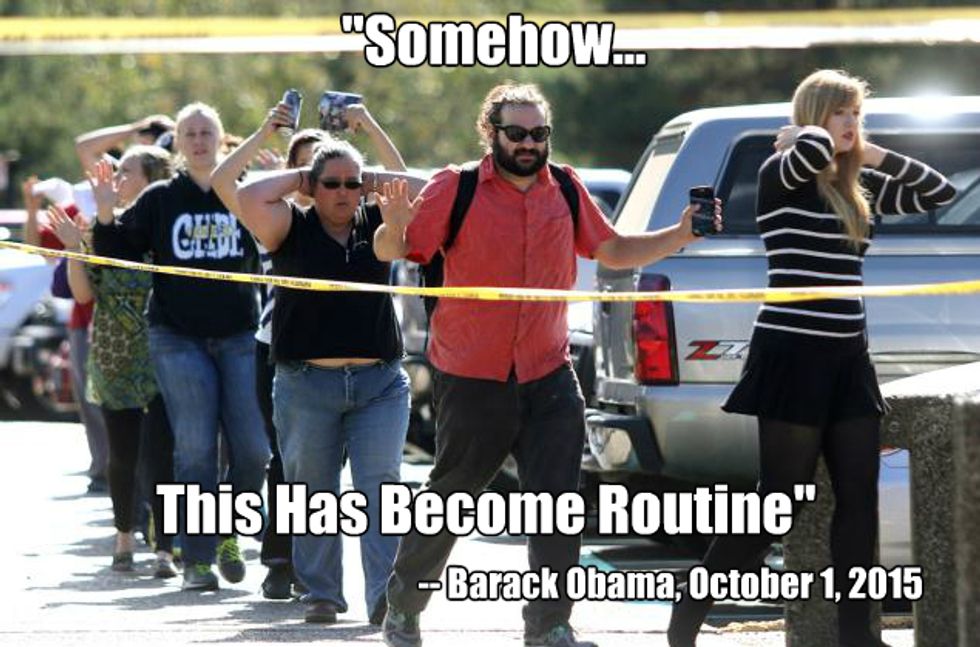 President Obama fumed at the numbing familiarity of the shock, the grief, the expressions of sorrow and comfort, and the predictable responses that what we really need is more guns. Rachel Maddow noted that Thursday's murders in Roseburg were unusual in that, even many hours after, the final death toll was unknown -- and then commented that it was sickening that we know so well how the information flow in a mass shooting usually works. And god knows we've had far too much practice. Let's take a grim walk down memory lane, only for 2015, and only stories that we covered on Yr Wonkette:

Three students -- Deah Shaddy Barakat, 23; his wife, Yusor Abu-Salha, 21; and her sister, Razan Mohammad Abu-Salha, 19 -- were murdered by their neighbor in a Chapel Hill apartment complex, allegedly over a longrunning feud over parking parking, or possibly because the killer hated Muslims, or possibly all religions. This one just barely counts as a mass shooting by FBI standards, which count three victims not including the gunman.

Charleston is a standout in the horror of mass shootings because the killer attended Bible study and sat for an hour with his victims before standing up and killing them in an effort to start a race war. It's also remarkable for the survivors' insistence on living their Christianity by forgiving the killer at a court hearing. And of course, it was remarkable for just how long it took for certain corners of Wingnut America to accept -- if they do yet -- that the shootings were motivated by racial hatred.

A 24-year-old Muslim man who had been diagnosed with depression and bipolar disorder shot up a military recruiting center and Navy Reserve center in Chattanooga, killing four victims immediately; a fifth died in the hospital. The shootings inspired a Florida gun range owner to declare his business "Muslim Free" and a bunch of yahoos to "guard" military recruiting offices. At one, a guy fired off a shot into the parking lot, and at an Oklahoma "Muslim Free" gun shop, another self-appointed "guard" shot himself in the arm.

This one isn't quite a "mass" shooting by the FBI's definition, since one of the three dead was the gunman. A 59-year-old man murdered two women and injured several more. A local teacher jumped in front of a friend to pull a fire alarm, taking a bullet that would almost certainly would have struck the friend in the head; both women survived. Louisiana Gov. Bobby Jindal condemned President Obama for suggesting that the easy availability of guns may have contributed to the murders.

A gun lover who frequently practiced shooting targets in his rural backyard killed his wife and his two sons, aged 3 and 4, in a domestic dispute. The man then shot himself in the head, but survived. The killer was obsessed with the need to have guns to defend himself from home invasions and a potential government attempt to take away his guns and impose tyranny. As we noted at the time, his children will not have to grow up in such a world.

Journalists Alison Parker and Adam Ward of Roanoke TV station WDJB were shot to death during a live report at a shopping center; the woman they were interviewing, Vicki Gardner, was wounded. The killer, a former employee of the station with a history of grudges against white employers, killed himself while being pursued by police. Rightwing commenters noted that he was black, and that black people are extremely violent. Also not technically a "mass shooting" under FBI criteria.

And those are only the ones that we covered on Wonkette, in 2015, and we've probably missed a few multiple-injury shootings that were only included in our occasional "Cold Dead Hands" roundups.

The Washington Post ran a chilling article Thursday, noting that so far, 2015 has had 294 mass shootings in just 274 days so far. It uses the looser definition at Mass Shooting Tracker: "incidents where 4 or more people are killed or injured by gunfire," which can include the shooter. The Post notes that the longest we've gone without such an incident in 2015 was eight days. And going by calendar weeks -- from Sunday to Saturday -- there hasn't been a single week without a mass shooting in 2015:

The Los Angeles Times also points out that there have been 142 shootings since Sandy Hook, not all of them fatal. That averages out to just short of one a week. That tally does not include incidents in which a gun was found in a school but not fired.

Also, you'll note that with few exceptions, the mass shooting stories that tend to get the most coverage are those that occur in public places -- schools, theaters, churches. But of course that's only because those are the ones that seem the most terrifying, leaving us wondering if it could happen to us out in public. But as Huffington Post's Melissa Jeltsen detailed in August, the overwhelming majority of mass shootings happen in private homes -- like the Aug. 8 Houston shooting in which a man broke into his ex-girlfriend's house, killing her, her husband, and her six children, for instance.

Analyzing data from Everytown for Gun Safety, HuffPo determined that 70 percent of mass shootings occurred at home, and 42 percent involved a current or former intimate partner. When you add in other family members, you've got a full 57 percent of mass shootings. So, as with the vast majority of non-mass shootings, it's not the stranger in the mall or the classroom you need to worry about. It's the people with guns you live with.

Congress has been investigating the deaths of four Americans in Benghazi forever. It's been "investigating" Planned Parenthood for performing legal surgical procedures and legal donations of some fetal tissue, and is ready to shut down the government over that. Guess what Congress isn't investigating at all, and probably never will?