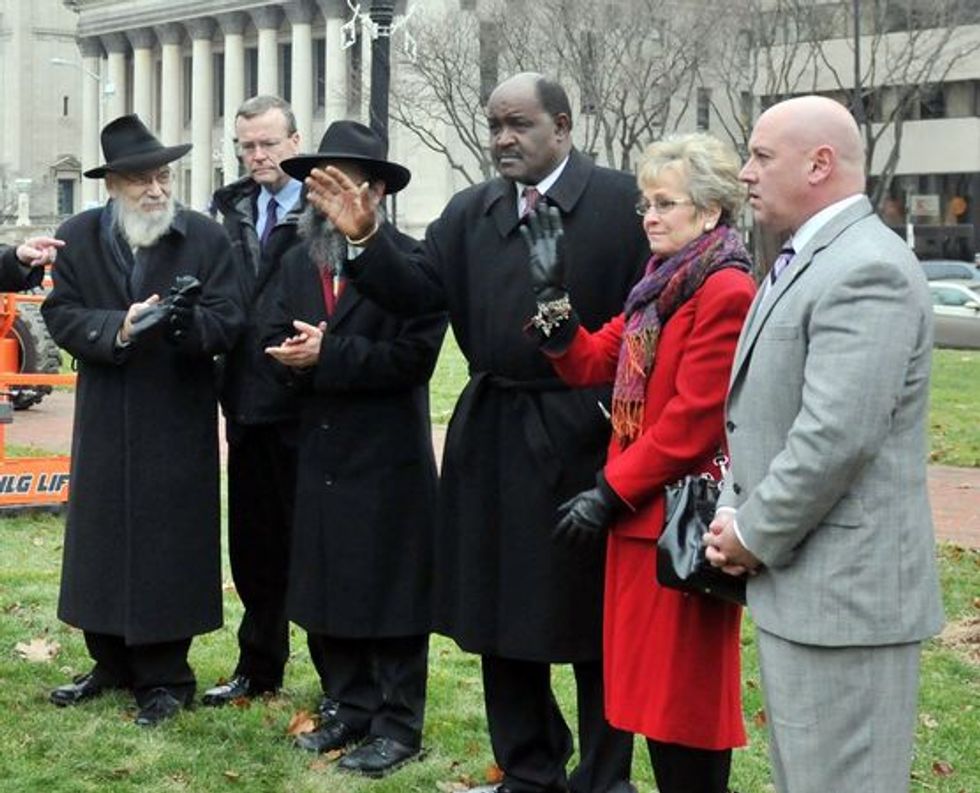 Forget the War on Christmas. 2014 is the year of the War on Hanukkah. First there was the discovery of Scott Walker's long ago "Molotov" holiday wish, and then we had Rick Perry's bizarre comparison of the Boston Tea Party to the Maccabees, and then Tuesday, on the first of the eight crazy nights, a city councilman in Springfield, Massachusetts, one Bud Williams, commemorated the city's official menorah lighting by saying, "Jesus is the reason for the season":

Following short speeches by Congressman Richard Neal of Springfield and Mayor Domenic Sarno, who both touched on the history of religion in Springfield, Williams was handed the microphone and uttered the line that had people talking long after the ceremony ended.

The article from The Republican news staff was careful to note that Jews do not generally celebrate the birth of Jesus, which seems a pretty callous slur on many families' sacred movies-and-Chinese-food rituals. The piece then goes on to explain that Christians don't generally attribute the miracles of Hanukkah to Jesus, either, which is some pretty canny reporting.

Happily, after the initial WTFs had died down a bit, Mr. Williams was quite happy to "clarify" his comments -- which gave him the chance to step on his dreidel all over again. You see, Williams explained later Tuesday night, he was just getting into the spirit of things:

"I thought it added something to the service, it didn't take away," Williams said Tuesday night.

The city councilor said he referenced Jesus Christ, whose birth is celebrated every Dec. 25 by Christians worldwide but not by Jews, after participants in the ceremony mentioned "the bright light" of 2,000 years ago – an allusion to Christ, according to Williams.

"They said it," Williams said.

Festival of lights / The Way, the Truth, and the Light. Pretty much the same holiday, when you think about it. Obviously, Councilor Bud Williams is just channeling Rick Santorum's Hanukkah card from 2011, which was emblazoned with Jesus's famous "I am the Light Of the World, You're gonna need shades" quote. Besides, the Jews started it. Besides also too, says Williams, he wasn't trying to one-up the Jews and their funny hats:

The councilor said his remark wasn't meant as an expression of religious superiority or "dominance," but rather as a simple reminder about the "reason for the season."

"Jesus was Jewish," Williams said. "To me, Jesus is the messiah ... I thought I was being very positive."

Williams said some people thanked him for his remarks. "A couple of the rabbis walked up to me and said, 'Great comments, Mr. Williams.' "

There's no arguing with that logic. No, really, there simply isn't.

Rabbi Chaim Kosofsky, who attended the ceremony Tuesday, had a pretty flawless reply when asked to comment on Williams's holiday enhancement strategy: "I'll get back to you," he told The Republican. You know, just like Jesus!