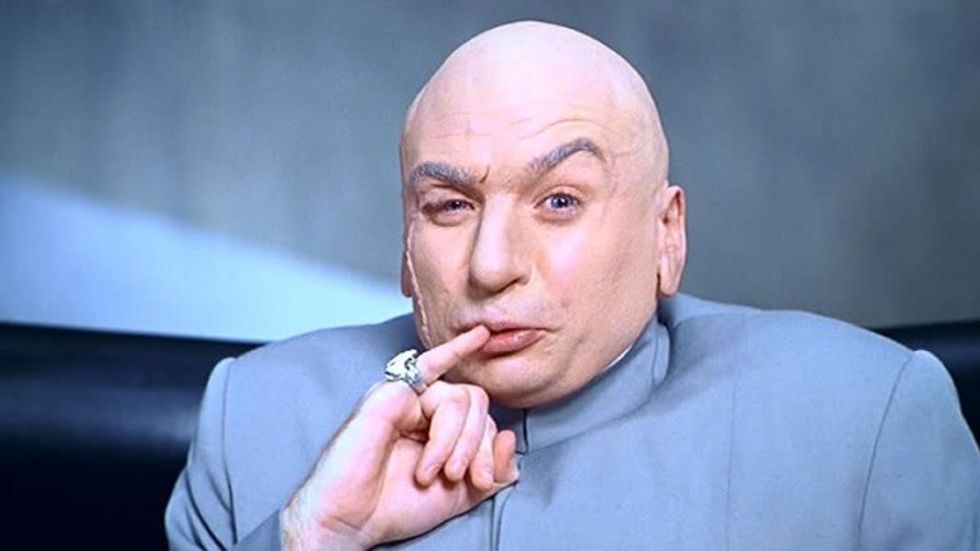 The Supreme Court recently decreed that the only kind of political corruption that exists — indeed, the only kind of political corruption that could possibly exist — is quid pro quo bribery. Did everyone hear that, are we all clear on the rules? You can do a whole mess of things to buy influence over politics, but you cannot just give someone money and say, "Here is money, now go do a thing in politics," and you also cannot just say, "I will do a thing in politics in exchange for gobs and gobs of filthy lucre."

What's that, Mark Fisher, Tea Party candidate for governor in Massachusetts? You ALLEGEDLY asked for $1 million in exchange for doing a politics thing? Oh dear, that is very bad. Didn't you read the handbook? We will blockquote the Boston Globe at you now.

[Fisher's lawyer] confirmed Tuesday night that Fisher, who is suing for the right to face off against Republican front-runner Charlie Baker in the fall primary, had asked for $1 million [to drop his challenge demanding to be on the ballot], but said it was only a “starting point" in the negotiations.

“We’re trying to negotiate a reasonable settlement and you have to start somewhere," he said.

The attorney said that Fisher’s request for compensation was reasonable and not illegal because the candidate has “put out a lot into this” and should be rightly compensated.

All of this comes out of a confuzzling kerfluffle that happened at the Massachusetts GOP's convention, which is totally boring but you can read about it here if you're into that sort of thing. Basically, Charlie Baker beat Mark Fisher for the nomination, but not by much, and so the two campaigns and the state GOP got together to try to work out some kind of mutually beneficial arrangement, if you know what we mean, and we think you do.

It's not that weird for some sort of an arrangement to be made among political rivals. Bamz did it for Hillz a couple years ago. What is weird is the fact that someone affiliated with either the Baker campaign or the state GOP gave this story to the Boston Globe, rather than continue to negotiate in private.

But then you look a little closer, and you get a sense of the leaker's thought process. So, Fisher, the Grifter King of Shrewsbury, says, "I want $1 million, payable in unmarked, non-sequential dogecoins, please," and the state GOP and the Baker campaign go, "Uhh, go fuck yourself?" And then Fisher flashes his mad negotiation skillz.

In a letter shared with Republican State Committee members Tuesday evening, the party’s lawyer, Louis M. Ciavarra, outlined a series of meetings in which he advised Fisher’s attorney that it is unlawful to pay someone in exchange for dropping out of a political race. [...]

According to Ciavarra, Fisher responded to his warnings by lowering his request to $650,000.

A million dollars is illegal? Okay, then about about six-fiddy? Five-fiddy? Tree-fiddy? Forty bucks, I'll drop my lawsuit for forty bucks.

Fisher has a point, though: if only the Republican convention had, like, happened differently, he'd totally be on the ballot already.

Fisher, a wealthy Shrewsbury businessman who has financed his campaign with $340,000 of his own money, filed the suit after the party said he failed by an exceedingly slim margin to win enough delegate votes at its March 22 convention to be able to participate in the primary.

He came so close, you guys, just like President Al Gore! Mark Fisher is that kid who keeps striking out in tee ball, and then on the last game of the season, the other team's coach tells his team to not even play defense so Mark Fisher can feel the thrill of hitting a home run. Please, Massachusetts, make him your governor.