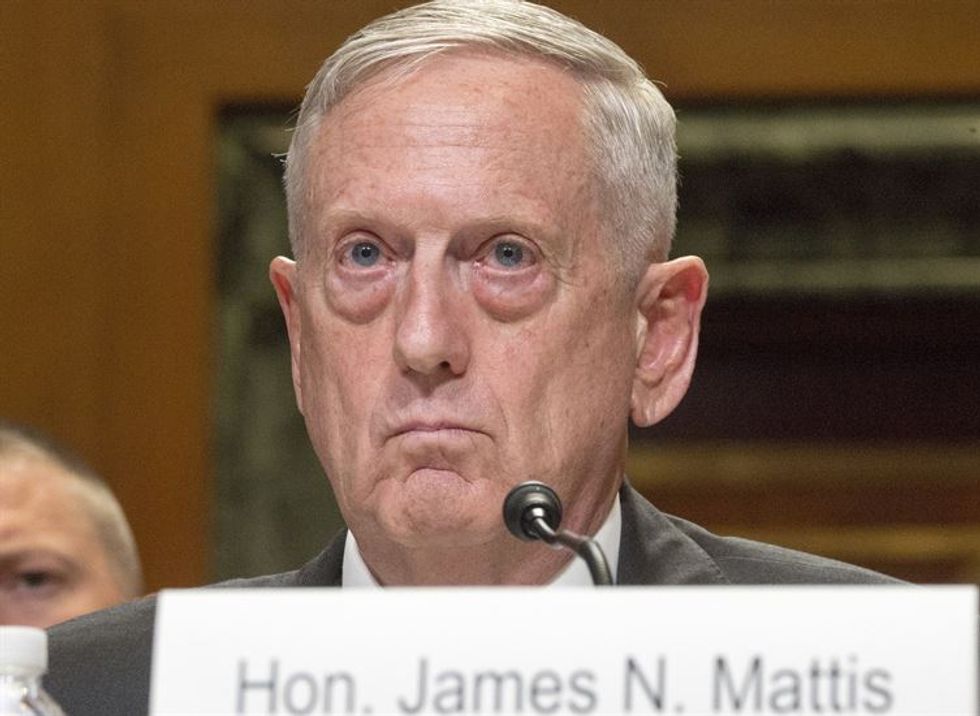 Defense Secretary Jim Mattis announced late on Tuesday that he wouldn't take any action on whether transgender members of the military can continue to serve until the issue has been studied by a panel of experts, effectively freezing the not-really-an-order that Donald Trump tweeted back in July. Before any more love letters to Mattis about how brave he is for "defying" the president, it's worth noting that the actual guidance sent to the Pentagon contained a most cunning loophole that gives Mattis and the real generals a lot of discretion in shaping whatever policy emerges, and may even let them walk back the policy-by-Twitter devised by the imaginary generals in Trump's head. This may not be Mattis getting all mavericky so much as a strategic advance to the rear, carefully planned by White House lawyers who drafted the real order for Trump to sign.

After Mattis's announcement Tuesday, there was of course much rejoicing about Mattis's "defiance" of Trump's order, because it's definitely very different from what Trump tweeted in July:

The thing is, Mattis's announcement is in line with the actual directive the White House sent to the Pentagon Friday night while everyone was talking about either Hurricane Harvey or the pardon for Joe Arpaio. That memo does indeed lay out some serious changes, as Russell Spivak points out at Lawfare: It would bar the enlistment of new transgender recruits, and would halt Defense Department funding of sex-reassignment surgery for current personnel, "except to the extent necessary to protect the health of an individual who has already begun a course of treatment to reassign his or her sex."

But there are a couple of loopholes written into the policy directive that you could drive an Abrams tank through, and they don't appear to be mistakes at all, but rather a possible means to let Trump back away from his stupid Tweets while saying he's listening to the wise counsel of "his" generals. The first is language that explicitly gave Mattis the option of doing exactly what he did, delaying any action on currently serving trans personnel:

As Spivak says, Mattis appears to have "tremendous leeway in how the military moves forward to implement the President’s mandate." Which could very well include a recommendation by that advisory panel -- which has yet to be actually formed -- to keep all currently serving trans folks serving exactly as they have been.

As for the enlistment of trans individuals in the future, the memorandum even seems to offer the Pentagon wiggle room to let that go forward at some point, too:

President Trump explicitly left open the possibility the new policy might be temporary: the ban will remain in place “until such time as a sufficient basis exists upon which to conclude that terminating that policy and practice would not have the negative effects discussed above.” President Trump specifically notes that an about-face is possible if the Secretary of Defense “provides a recommendation to the contrary that I find convincing.”

As the Washington Post explains, there's a fair chance Mattis will find a way to save Trump from his own rash, poorly-thought-out tweet:

Mattis declared in his statement that a panel of experts would be set up to “provide advice and recommendations on the implementation of the president’s direction.” Once the panel delivers some recommendations, Mattis continued, he’ll go back to the president.

Mattis could justifiably state, as he did, that far from defying the president, he was only carrying out “the president’s policy direction” and acting “as directed.”

Trump didn't actually consult with "his" generals, but now that the Pentagon has been given the power to shape the final policy, it seems likely that military leaders -- who didn't expect the July tweet and were mostly appalled by the sudden, unjustified reversal of a policy the Obama administration had put in place after a year of planning -- will let transgender men and women continue to serve their country.

Don't be the least bit surprised if the Pentagon carefully studies the "disruptions" Trump worried about, finds them to be a non-issue, and then, come January, recommends that no soldiers, sailors, Marines, or airmen lose their jobs. Then Donald Trump can declare victory for having given his generals the time to carefully review Barack Obama's hasty order. Chances are he'll retain the prohibition on sex reassignment surgery, so he can tell his fundagelical supporters he Did Something, and then a saner president can quietly reverse that, too. All of that, of course, depends on Mattis and others being able to persuade Trump that he thought of it.

Or maybe Trump will tweet that he's firing everyone in the Defense Department, depending on what's going on with the Russia investigation.