Maureen Dowd Is A Idiot, Says Joe Biden And Everyone Else 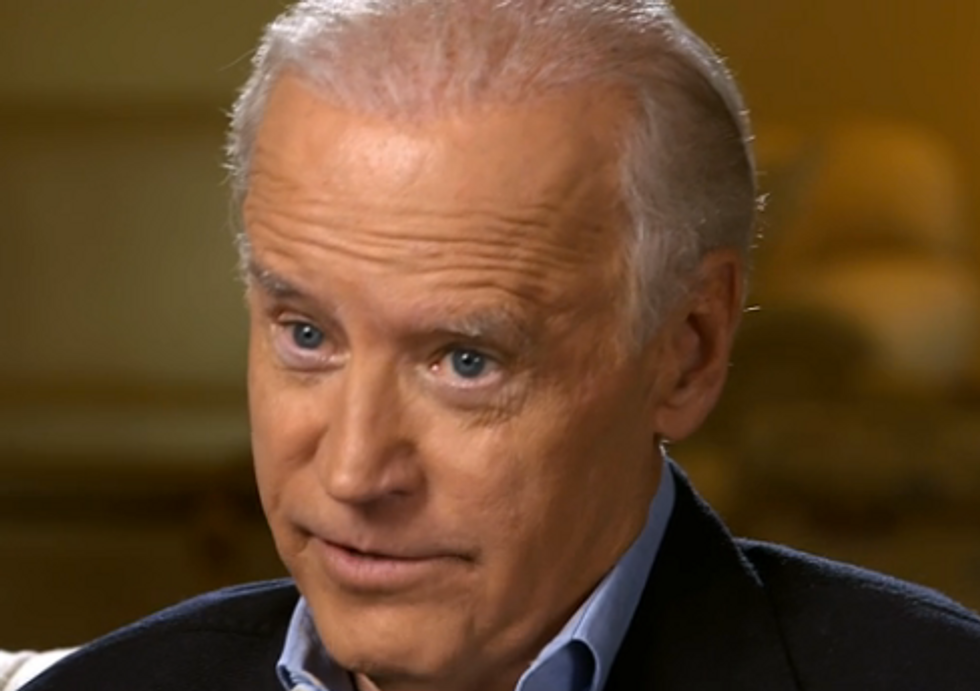 Remember that time The Media spent three months breathlessly BREAKING EXCLUSIVE!!! reporting rumors from anonymous sources that Joe Biden was totally going to run for president? And CNN humiliated itself (more, we mean, than usual) by openly begging the vice president to give it a ratings boost by doing a special guest surprise appearance at the Democratic debate, pretty please please please, Joe, PLEASE? But he didn't do that, because what the eff does he care about CNN's ratings?

The rumors were helped along in no small part by pathological Clinton-hater and New York Times hack Maureen Dowd, who wrote a dramatic short story in which Beau begged his father, from his deathbed, to please kick some Clinton ass, for America and Maureen Dowd:

When Beau realized he was not going to make it, he asked his father if he had a minute to sit down and talk.

At the table, Beau told his dad he was worried about him.

My kid’s dying, an anguished Joe Biden thought to himself, and he’s making sure I’m O.K.

“Dad, I know you don’t give a damn about money,” Beau told him, dismissing the idea that his father would take some sort of cushy job after the vice presidency to cash in.

Beau was losing his nouns and the right side of his face was partially paralyzed. But he had a mission: He tried to make his father promise to run, arguing that the White House should not revert to the Clintons and that the country would be better off with Biden values.

And thus, the media frenzied all over itself because Maureen frickin' Dowd "reported" this story and then later let the rumors swirl that Joe Biden himself had told her this tale, which he denied because YEAH, RIGHT.

Then Old Handsome Joe announced last week, from the White House Rose Garden, that everyone who'd said he was definitely running was a total A Idiot, because nope, he is not going to run, wrong and YA BURNT, and please stop pestering him and his family and let them grieve the death of Beau Biden in peace now.

On Sunday, the vice president and Dr. Jill appeared on "60 Minutes" to further explain, nice and calm-like, without any swears or anything, why everyone who was trying to Draft Biden and force him to run for president was wrong and also a dick because HELLO, McFLY, the Biden family is still grieving the death of Beau, from cancer, and that's not the kind of thing you get over right quick so you can fulfill the selfish demands of Democrats who want someone, anyone, to please run against Hillary Clinton and think the other Democrats in the race don't count for some reason.

The vice president had a special message for Maureen Dowd, although he didn't use her name, but he made it super obvious exactly whose pointy head he was turding on, in his Old Handsome Joe way:

Beau all along thought that I should run and I could win. But there was not what was sort of made out as kind of this Hollywood-esque thing that at the last minute Beau grabbed my hand and said, "Dad, you've got to run, like, win one for the Gipper." It wasn't anything like that.

According to our Uncle Joe-to-Wonkette dictionary, that's Bidenese for, "Fuck you, you stupid twat, how dare you make up some Lifetime special version of my son's dying wish, just so you could troll Hillary Clinton, GAHHHHH EAT A DICK."

At least, that's what we think Biden was really saying. Maybe we're wrong.

The rest of the interview is worth watching too, by the way, if you're in the mood for feeling even more verklempt about the Bidens' loss and the vice president's amazing superhuman resilience.