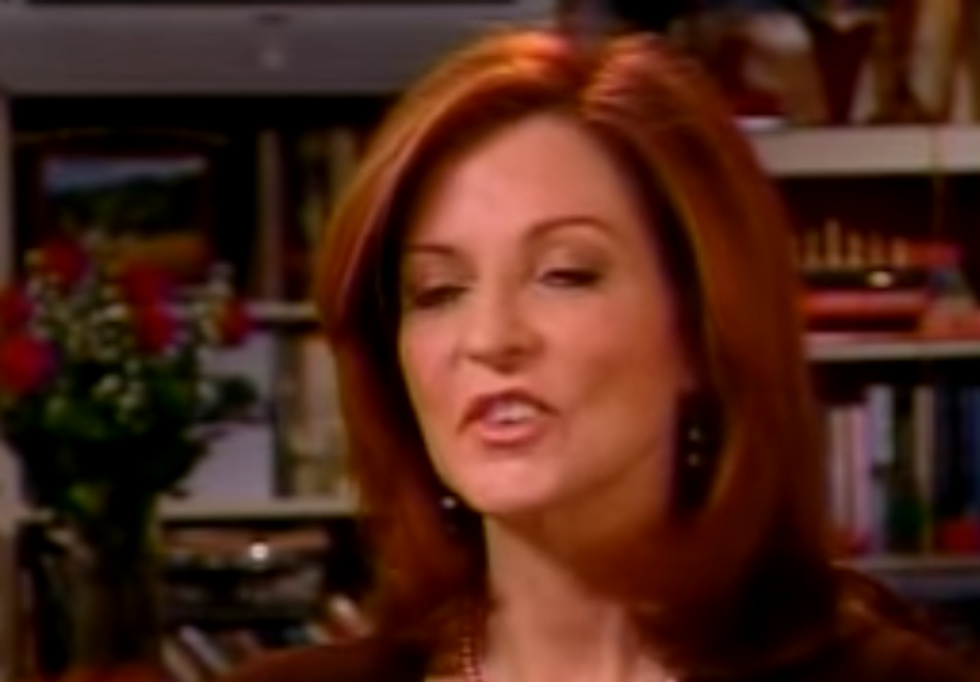 It is a day, which means Maureen Dowd is being a bad writer with a preternaturally disturbing rage boner against the Clintons. Ho hum. This week, it's all about Hillary's "goo," and how she gets it on everybody, including MoDo we guess:

It says a lot about our relationship with Hillary Clinton that she seems well on her way to becoming Madam President because she’s not getting indicted.

An indictment was never likely, never ever, nope. She's well on her way to becoming Madam President because, like a typical Clinton, she's having her opponents murdered, WITH VOTES.

In a mere 11 days, arrogant, selfish actions by the Clintons contaminated three of the purest brands in Washington — Barack Obama, James Comey and Loretta Lynch — and jeopardized the futures of Hillary’s most loyal aides.

But in the end, Hillary’s goo got on Obama anyhow.

Right on his face. And you thought the Clenis left stains, pfffffffffft. Sorry, the president can't talk to you right now, his face is sticked together because it got Benghazi-ed with Hillary "goo." (AND HE LIKED IT.)

On Tuesday, after Comey managed to make both Democrats and Republicans angry by indicting Clinton politically but not legally, Barry and Hillary flew to Charlotte, N.C., for their first joint campaign appearance.

[wonkbar]<a href="http://wonkette.com/575928/barack-obama-hates-maureen-dowd-as-do-all-patriotic-americans"></a>[/wonkbar]Hey, remember who hates Maureen Dowd, besides every human and furry woodland creature living or dead? Barack Obama is who. And it's really not cute when she calls him "Barry." (It is cute, on the other hand, when Wonkette does it, because we say "Barry" in the sexxx way.)

Obama was left in the awkward position of vouching for Hillary’s “steady judgment” to run an angry, violent, jittery nation on the very day that his F.B.I. director lambasted her errant judgment on circumventing the State Department email system, making it clear that she had been lying to the American public for the last 16 months.

Yeah, Obama looked so awkward up there, enthusiastically stumping for his colleague and friend, Hillary Clinton.

[wonkbar]<a href="http://wonkette.com/603829/comey-hearings-just-a-bunch-of-house-republicans-stepping-on-own-dicks-again"></a>[/wonkbar]Also, did James Comey "make it clear" that Hillary has been "lying to the American public for the last 16 months"? No, he actually did not, which you can easily find out if you're not too busy marinating in a dutch oven full of pot brownies and resentment to actually read the source material. Maybe if MoDo pulled her head out of tabloid shitrags like The New York Times and read a real newspaper like Wonkette once in a while, she'd know that.

Sweet Jesus, how many more words does Maureen have to upchuck at us? Let's skip ahead:

Obama aimed to have no shadows, but the Clintons operate in shadows.

After Bill Clinton crossed the tarmac in Phoenix to have a long chat with Lynch ...

President Obama is not upset about being pulled into the Clinton Under Toad, to use an old John Irving expression. He thinks Washington is so broken that the next president will need a specific skill set to function, and he thinks Hillary has that.

But what should disturb Obama, who bypassed his own vice president to lay out the red carpet for Hillary ...

[wonkbar]<a href="http://wonkette.com/595318/maureen-dowd-is-a-idiot-says-joe-biden-and-everyone-else"></a>[/wonkbar]His vice president, Old Handsome Joe Biden, lost his son last year and ultimately decided not to run for president. Hey, know who ELSE hates Maureen Dowd, besides Barack Obama, all woodland creatures, the angelic choirs of heaven and all patriotic Americans? Joe Biden is who.