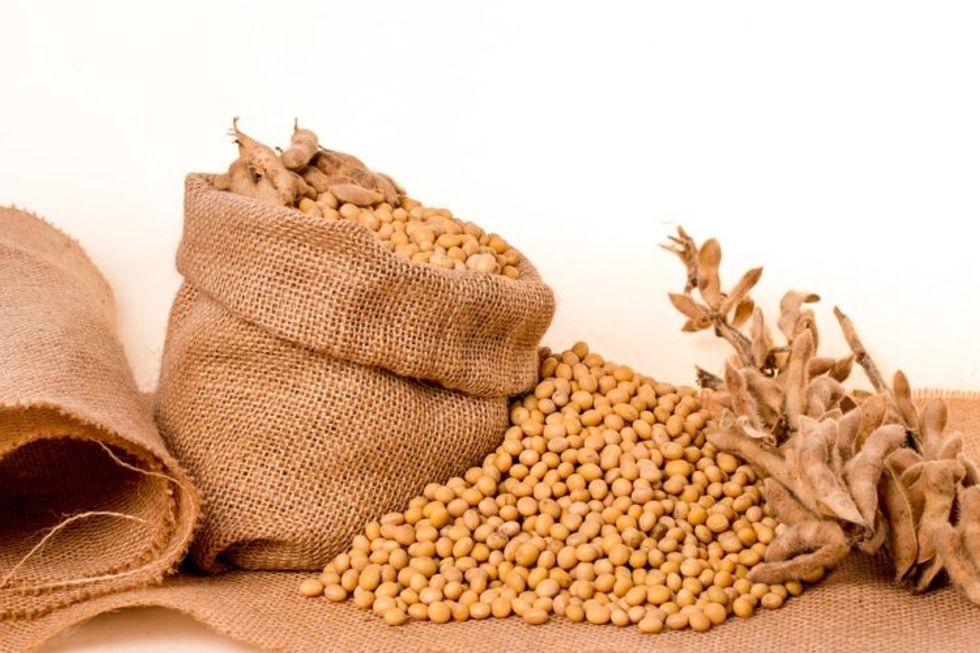 Donald Trump was accidentally right about a thing, as usual, in the wrongest possible way. At a cabinet meeting today, Trump was very, very unhappy about China's planned tariffs on American corn, pork, beef, soybeans, and other products that China imports a whole bunch of from the USA. How can they be such poor sports about all this trade war stuff? He's only standing up for the American Worker, while China is out to hurt Trump, by causing huge financial losses for people who voted for him, but really, it's Trump who's hurting:

“It's not nice when they hit the farmers specifically because they think that hits me.”

— Trump, at the Cabinet meeting, referring to China’s proposed tariffs on US goods.#Iowapic.twitter.com/DUKMrOvglA

On the one hand, Oh For Fuckssake, real presidents don't come out and petulantly say the bad foreign adversary is trying to hurt him politically, because that's churlish -- especially considering that Trump's tariffs on Chinese goods very specifically exclude clothes and shoes, which is awfully nice for his daughter the clothes and shoes importer. But for Donald Trump, everything is personal, even when it's not.

And in this case, churlish though it is for Trump to say it out loud since other people are losing the money, the Chinese tariffs really are going to hurt agricultural states, with all their Trump supporters. Not all the tariffs will hurt agricultural states, unless Iowa has suddenly sprouted a jet aircraft industry we missed. (But let us "ACTUALLY" ourselves: Bizjet manufacturer Cessna is headquartered in Wichita, Kansas, and Gulfstream Aerospace in Savannah, Georgia.)

You know, maybe Trump shouldn't have handed out quite so many copies of that damned county-by-county electoral map, huh? It fairly screamed, "Target tariffs here!"

Based on AP data; see linky for full-size map

Trump also explained that, because they love him and love America (but mostly him), farmers will be just fine with it, because they are "great patriots" who'll happily tell their grandchildren some day about the time they humped the boonies in Donald Trump's trade war:

Trump on negative impact Chinese tariffs will have on farmers: "If during the course of a negotiation [China] wants to hit the farmers b/c they think that hits me, I wouldn't say that's nice but our farmers are great patriots. They understand they're doing this for the country" pic.twitter.com/fuel41HrIR

"But I tell you, our farmers are great patriots," Trump said, strangely rhyming the final syllable of "patriots" with "Russian Bots."

These are great patriots. They understand that they're doing this for the country, and we'll make it up to them. And in the end, they're going to be much stronger than they are right now.

Trump didn't specify how exactly he'd "make it up to them," although presumably he meant that more protectionist trade policies would do for farmers what the Smoot-Hawley Tariff did for the nation in 1930 (that's a little tariff joke there).

Also, the farmers won't mind that they're taking the hit from the tariffs and Ivanka Trump isn't, because isn't she a sweet, dutiful daughter?

This isn't the first time Donald Trump has been personally put out that China isn't taking so kindly to America imposing a bunch of tariffs on Chinese goods; last week, he threatened a new wave of even larger tariffs, in the whiniest language possible:

"In light of China's unfair retaliation, I have instructed the [United States Trade Representative] to consider whether $100 billion of additional tariffs would be appropriate," the president said in a statement.

"Unfair retaliation." Jesus, Donnie, why don't you just say, "MOM! HE HIT ME BACK!"

Yr Wonkette is supported by reader donations. Please click here to send us money. Don't make us turn this blog around. We swear, we will go home without any ice cream.