McConnell And Ryan Boning Susan Collins (ON TAX CUT DEALS, Not Like That, You Disgusting Perv) 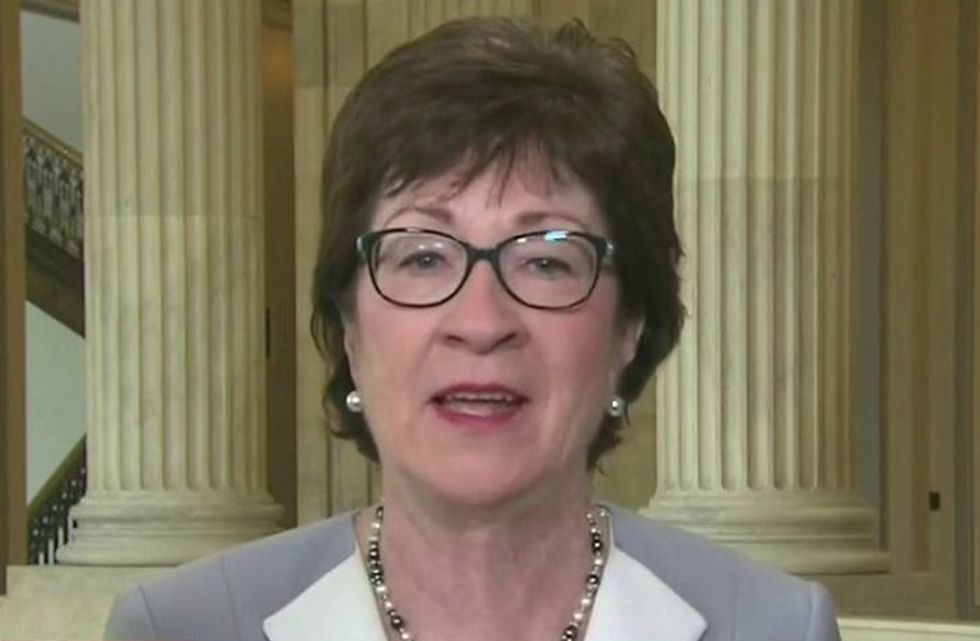 Maine Republican Susan Collins agreed to vote on the Senate's version of the Big Fat Tax Cuts For Big Fat Millionaires Bill, but only on certain conditions: She wanted amendments to preserve tax deductions for state and local taxes and for medical expenses, and she received Mitch McConnell's solemn promise that there would be no automatic cuts to Medicare due to the deficit increases caused by the tax cuts. Her vote also depended on the passage of two bills to stabilize the individual marketplace in the Affordable Care Act, in the hope that would balance out the repeal of the individual mandate. Well, gosh, here's a surprise: Now that the tax cut bill passed the Senate and has gone to conference committee with the House, it's looking like the stuff Collins demanded as a prerequisite of her vote is gone from the conference bill, and the House has no interest in stabilizing Obamacare, either. We're certain Collins is simply gobsmacked.

Asked if she would consider voting against the final bill if it comes out of the conference committee without her proposed amendments, Collins told Bangor TV station WABI,

I would. I'm going to look at what comes out of the conference committee meeting to reconcile the differences between the Senate and House Bill. So I won't make a final decision until I see what that package is.

Collins said she's "encouraged" her amendments will make it into the final version of the tax cut bill, although of course that will ultimately depend on what additional fuckery the conference committee decides is necessary to please the House Freedom Caucus, like including a return to the fine old institution of indentured servitude.

As for the four percent Medicare cuts that would be automatically triggered when the tax cuts explode the deficit, Collins said that's a "real fear," but not too real a fear, because she trusts two nice men who dropped by in an old van with "FREE TAX CUTS" painted on the side:

I am absolutely certain that 4% cut in Medicare that I mentioned will not occur. I have it in writing from both the Speaker of the House Paul Ryan and also Senator Mitch McConnell.

If you can't trust the written promises of Paul Ryan and Mitch McConnell, well then, you may as well just let an accused child molester vote in the Senate.

The other part of the deal Collins insisted on for her vote, a pair of bills that would help stabilize the ACA markets, appear to be dead in the water in the House, without even a promise of support from the very trustworthy Paul Ryan. One is the Murray-Alexander bill to restore cost-sharing reduction (CSR) insurance subsidies that Donald Trump killed in October (the Republicans suing to keep from paying the CSRs the past couple years is what caused your premiums to skyrocket, FYI); the other was a reinsurance program to help insurers cover the most expensive patients, which Collins co-authored with Florida Democrat Bill Nelson. Neither bill is getting any traction in the House, because the House doesn't want to shore up the ACA, it wants it dead, dead, dead. Collins had McConnell's word that he would make sure the bills would be included in a year-end government funding bill. But Paul Ryan said earlier this week he hadn't agreed to that deal and didn't know nothing about birthing no healthcare compromises, either.

Mark Walker, chair of the Republican Study Committee, said Thursday that any year-end budget deal would be unpolluted by saving anyone's healthcare:

“The three things we were told are not gonna happen as part of our agreement: no CSRs, no DACA, no debt limit,” he said, referring to efforts to fund Obamacare’s cost-sharing subsidies.

Even if the measures Collins backs were to pass, it's doubtful whether they would offset the 13 million Americans expected to leave the ACA market when the individual mandate is killed off; the Congressional Budget Office has already said the stabilization of CSRs wouldn't significantly reduce that number. Avalere, an independent healthcare analysis group, issued a report this week saying the two measures together would reduce premiums and increase ACA enrollment, but that was based on the individual mandate remaining in place. Avalere's analysis didn't address the degree to which the two bills would mitigate the damage done by repeal of the individual mandate, but said whatever stability they provided would be "overshadowed" by the marked instability resulting from repeal. Tl;dr version: Even if Collins got what she wanted, millions more Americans will lose healthcare thanks to this tax cut bill, and she's unlikely to get what she wants.

If Collins turns into a "no," the tax bill could still pass if no other Republican senators defect. Bob Corker is unlikely to switch to a "yes," but with 50 votes, VP Mike pence can break a tie. What would make things really interesting would be if Democrat Doug Jones manages to win the special election in Alabama next Tuesday and the tax bill isn't ready before Luther Strange is no longer available to ensure 50 votes. Losing Collins would then kill the tax mess entirely. Very long odds, and we have no doubt the Republicans would do everything they could to finagle a schedule that would make that outcome UNPOSSIBLE. But it's the holidays -- let's think happy thoughts. And get Doug Jones elected.

Yr Wonkette is supported by reader donations. Please click here to send money. If you formerly made monthly donations through Amazon, please re-up your monthly support through PayPal or Stripe, because Amazon Pay has decided to be a butt. And of course, it would be a great idea for you to send Doug Jones some monetary love and make the Republicans cry.