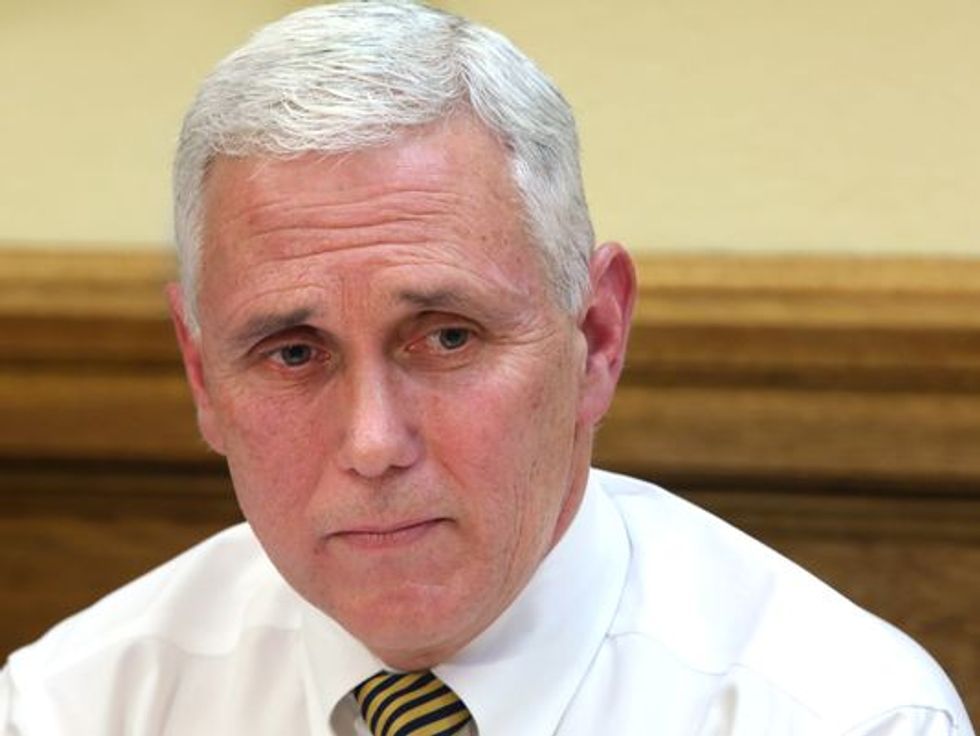 Indiana Gov. Mike Pence is also bad, and he should feel bad for signing this law in the first place.

Well, this is just not the week to be an anti-choicer, is it? First the Supreme Court said Texas can't make up dumb laws to close abortion clinics, and now Indiana is being barred from enacting its own dumb and gross abortion law, HEA 1337, which was supposed to go into effect today, July 1. WHOOPS!

[wonkbar]<a href="http://wonkette.com/600021/indiana-protects-unborned-babies-from-their-racist-sexist-mommies"></a>[/wonkbar]Federal District Court Judge Tanya Walton Pratt issued an injunction against enforcement of the law Thursday, following challenges brought by the ACLU and Planned Parenthood of Indiana and Kentucky (PPINK), on the grounds that allowing it to go into effect would result in "irreparable harm." Though the case may still go before the court, Pratt's decision suggests there is almost no way it will pass constitutional muster:

Under the State’s theory, a woman either wants to have a child or does not; and, once a woman chooses the former, she cannot then terminate her pregnancy for reasons the State deems improper. But the very notion that, pre-viability, a State can examine the basis for a woman’s choice to make this private, personal and difficult decision, if she at some point earlier decided she wants a child as a general matter, is inconsistent with the notion of a right rooted in privacy concerns and a liberty right to make independent decisions. [...]

The harms faced by PPINK and its patients are substantial, irreparable, and significant. Difficult moral and complicated health decisions are made by women whose pregnancies are affected by a prenatal fetal anomaly. Given the relatively short timeframe in which women may elect to terminate a pregnancy, even a short disruption of a woman’s ability to do so could have significant consequences. Given this, the harm flowing from the information dissemination provision is similarly severe. Absent an injunction, women would be informed that there could be legal consequences if they choose to terminate a pregnancy for these particular reasons, which could impair a woman’s ability to make her decision with “intimate views” and “with infinite variations.”... These harms far outweigh the generalized harms faced by the State in the delay of the implementation of its democratically enacted law.

Among other gross things, it requires counseling on "perinatal hospice care" for those who are considering abortions due to lethal fetal abnormalities -- like when the kid is going to be born with a brain outside its skull and will only live for 20 minutes of excruciating pain; bans abortions based on sex, race or genetic abnormalities like Down's Syndrome or Tay-Sachs; requires someone seeking an abortion to watch an ultrasound and listen to a fetal heartbeat 18 hours before obtaining an abortion; and makes it a Level 5 felony to donate fetal tissue or accept donations of fetal tissue.

Of course, the whole point of this law -- the part about sex and race selective abortions and abortions due to fetal anomalies -- is to make it look as though this isn't an anti-abortion law as much as an anti-discrimination law. And that abortion-havers are bad people who hate a specific gender or the race of someone they obviously liked enough to have sex with. That they are bad people for feeling like they would not be capable of properly raising a child with a severe developmental disability or be able to afford to do so. Or that they don't want to have a child with another kind of genetic abnormality that will cause them to suffer.

To boot, it's not as though if a doctor asks you, "Are you having an abortion because you found out that the child was a girl or because you found out it had Tay-Sachs and wouldn't live past the age four?" and that is the case, you have to tell them the truth. That isn't even true for undercover cops, despite what you may have learned from 1970s cop shows.

Judge Pratt also noted that the ban on fetal tissue donation and the forced dissemination of false information are very likely unconstitutional:

information regarding the anti-discrimination provisions to their patients. PPINK faces irreparable harm of a significantly greater magnitude if these provisions are not enjoined than that faced by the State. Second, PPINK has persuasively shown that the fetal tissue disposition provisions do not further a legitimate state interest and thus are likely unconstitutional. This, when combined with the fact that the balance of harms weighs slightly in PPINK’s favor, leads to the conclusion that PPINK is also entitled to an injunction with respect to these provisions.