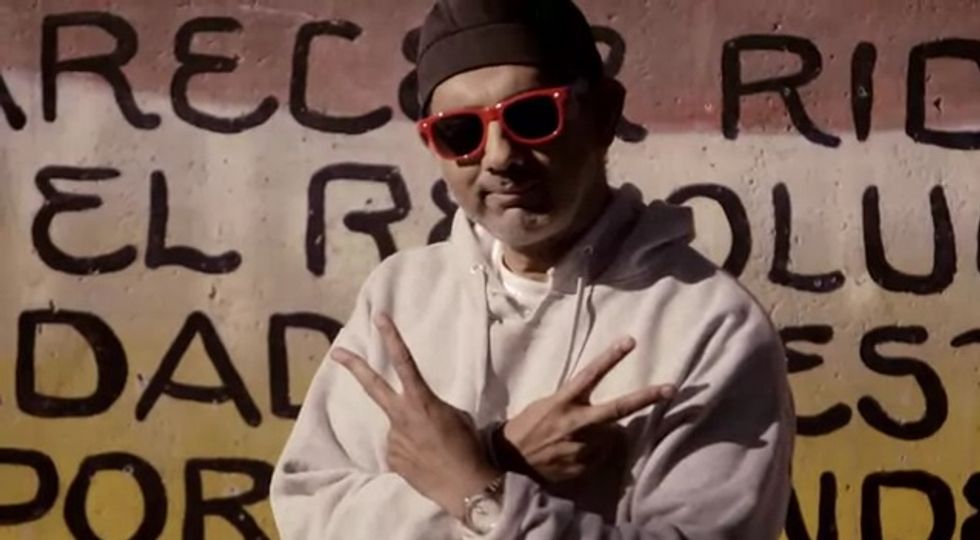 Felonious crimer thug Dinesh D'Souza has been out of the pokey for all of a month, and he's already in trouble again. On Monday, federal judge Richard Berman (we love him) explained to D'Souza's dumb ass and his dumbass attorney that D'Souza is not done paying his debt to society for his law-breaking. Not even close:

Conservative scribe Dinesh D’Souza has to perform a lot more community service for breaking campaign-finance laws than he thought, with a federal judge saying Monday that D’Souza has to do eight hours each week for the entire five years he’s on probation and not just the eight months he was confined to a halfway house.

D'Souza thought once he'd done his hard time at the La Jolla White Collar Sleep-Away Camp for the Criminally Repugnant But Not Especially Dangerous, he was free and clear to return to his life of cheating on his wife, appearing on Fox News, and making dumb "documentaries" about how Barack Obama is destroying America. Hell, D'Souza was trying to get out of his community service obligations while he was still being held in "overnight captivity," when Judge Berman (love LOVE him!) explained that no, there's no summer vacation for imprisoned(ish) felons:

“With respect to [his parole officer’s] request that Mr. D’Souza’s community service hours be ‘waived’ from June 1, 2015 until July 13, 2015, the request is respectfully denied,” Berman wrote.

“The short explanation is, as all criminal defendants are aware, that we don’t provide ‘summer breaks’ in these circumstances.”

Now Judge Berman (have we mentioned how much we love him?) has clarified that D'Souza has to do another 1600 hours of community service, and also he needs a lot more therapy, because his court-mandated psychiatrist says -- and yes, this is a technical psychological term -- D'Souza is ALL fucked up in the head, and also is a raging dick rash.

“In my mind it was never contemplated that the eight hours only applied to the period of home confinement,” Berman said, later reading out a report from a psychologist who saw D’Souza and then ordering him to continue attending weekly sessions.

This is most unfair to D'Souza, who has shown absolutely no remorse or signs of rehabilitation whatsoever and said that the one lesson he learned from his time in "jail" was that Democrats are "like the hardened criminals" D'Souza met in his little beachside detention center, and they're all trying to "steal the great wealth of America from the private enterprise sector to appropriate to their leftist purposes how that accumulated wealth is allocated, how it gets used and how it gets spent." Pretty sure that was not the lesson he was supposed to learn.

D'Souza's attorney, Ben Brafman, whined that requiring D'Souza to devote a whole eight hours a week to serving his community is "a very serious impediment to obtaining full-time employment," which isn't actually a problem at all because D'Souza has never had a real job, so we don't expect him to look for one now. Especially not with that nasty criminal record of his. Also too, there is probably nothing stopping D'Souza from doing his time on the weekends except for how he doesn't wanna, too bad for him, Judge Berman (call us!) don't give a flipping fuck. This is what happens when you break the law.

However, the judge did say that so long as D'Souza does his community service like he's supposed to, and stays out of trouble, he will be allowed to visit family in London and in India. One might think international travel would also be a serious impediment to getting a Real Job, huh. Not that we expect D'Souza to actually straighten up and fly right. You know how lawless thugs are. Can we say "recidivist," boys and girls?