Mean Ladies Bully Responsible Gun Owners Into Spitting On Them, Threatening To Rape And Kill Them, For Freedom 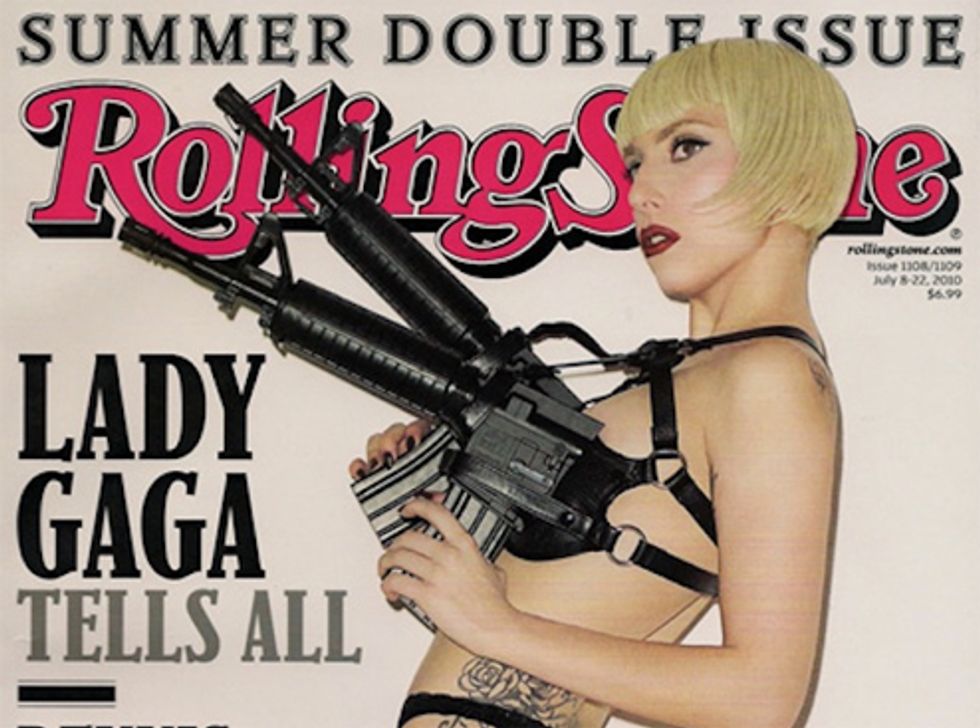 Here's a not-at-all nice story fromMother Jones about the lengths to which a whole bunch of Responsible Second Amendment Advocates have harassed and threatened women who have called for limitations on gun ownership. We want to make it clear that we don't think all gun fondlers are misogynist assholes, of course; MoJo writer Mark Follman has simply found a whole lot of completely isolated instances where individual "bad apples" have "gone too far" (maybe!) in their wholly justified concern that these anti-gun extremists will destroy America by advocating for tyrannical measures like background checks and limits on magazine size. When you consider what's at stake -- the Constitution itself -- it's perfectly understandable that some lovers of freedom might be driven to spit on, threaten with murder or rape, and perform mock executions of the radicals who would seize all guns through nefarious measures like background checks, which only 90% of Americans support.

Take, for instance, Jennifer Longdon, who was paralyzed in a 2004 shooting, and whose assailant was never caught. After participating in a press conference in Indianapolis -- held near the recent NRA convention there -- for the new gun control group Everytown for Gun Safety, she was waiting for a flight home when a gentleman in the airport noticed her sitting in her wheelchair:

As Longdon sat waiting for her flight, a screen in the concourse showed footage of the press conference. A tall, thin man standing nearby stared at Longdon, then back at the screen. Then he walked up to Longdon and spat in her face. No one else blinked.

Longdon was shocked and embarrassed, she told me, but she didn't falter. "Wow, aren't you a big man," she said as he turned and walked away. Instead of calling for security, she wheeled herself to a restroom to clean herself off.

Now, this is where you just know that the Usual Suspects will insist she made the whole thing up, because no decent gun fondler would ever do such a thing. Just like Longdon undoubtedly made up the guy who walked up to her during a gun-buyback event last May and said, "You know what was wrong with your shooting?" one said. "They didn't aim better." Or the other man at the same event who showed up to tell her he knew where she lived, and then recited her home address from memory. (She probably made up the Phoenix police officer who confirmed the account to Follman, too). And there's no way that anything like this could have possibly happened:

After a fundraiser one night during the program, Longdon returned home around 10 p.m., parked her ramp-equipped van and began unloading herself. As she wheeled up to her house, a man stepped out of the shadows. He was dressed in black and had a rifle, "like something out of a commando movie," Longdon told me. He took aim at her and pulled the trigger. Longdon was hit with a stream of water. "Don't you wish you had a gun now, bitch?" he scoffed before taking off.

For that matter, how do we even know she was actually shot in 2004? She could be faking. It's just inconceivable that any law-abiding supporters of the Second Amendment would do such things, because those good patriots never overreact. But if they did, they were totally justified, because freedom of speech, right?

Follman also shares some horror stories that have cropped up around the nice folks of Open Carry Texas, the bunch that recently drew attention when they showed up at a Jack in the Box, prompting the silly employees to hide in the freezer and call 911 because they thought it was a robbery. Stupid sheeple. After another demonstration in April, a gentleman posted the name and cellphone number of a high school teacher who had called police to report seeing a group of heavily armed men heading toward a shopping mall. The teacher started getting a whole bunch of Free Speach in the form of texts and voicemails calling her a "stupid bitch" and "motherfucking whore," and at least one promise to come after her with a gun. The gentleman who posted the video declined to talk to Follman, telling him "Feel free to contact me when you work for a real news organization." You know. like WND, maybe.

Follman notes that the video shows marches other than the one that the woman called about; also, she has changed her cell number to stop the harassment. But doesn't she understand that she's the actual bully and harasser? Members of Open Carry Texas think it's a terrific idea to expose the identities of people who call the police to report groups of people walking around with guns, because nobody should ever worry about groups of people walking around with guns, stupid. In a post that they've since removed from their Facebook page, they wrote,

Gun control bullies are all up in arms over this video published by one of our members. If you don't want your name publicized, simply don't make a false 911 call against law abiding gun owners.

(For the sake of accuracy, the teacher called the non-emergency dispatcher, not 911.) CJ Grisham, the group's founder, also said that since calls to police are public records, they have collected personal information from about 35 calls, but they don't plan to release the identifying details of callers. Probably.

For some reason, stupid ladies who want to take away all the guns keep thinking that Open Carry Texas is threatening them by just standing around with guns near them, like that time last November when a crowd of gun fans hung around outside a restaurant where four members of Moms Demand Action for Gun Sense in America were having a meeting. It was all a misunderstanding! And you certainly shouldn't read anything into the funny joke some nice members of Open Carry Texas made when they posed a topless female mannequin with it's hands raised for a "mad minute" of peppering it with gunshots. Open Carry Texas likes to call members of Moms Demand Action the "Mad Moms," but that's probably just a coincidence. No threat intended -- after all, you have to shoot at something, right? And there's definitely no threat implied in this happy Mother's Day video from a Florida gun instructor, either:

There's more, but you really should read the whole disaster chronicled by Follman, including a charming encounter at a San Antonio restaurant between Alex Jones and the father of one of the Aurora, Colorado, shooting victims, in which Jones walked up to the girl's father, stood an inch away from him, and then yelled about the man getting in Jones's personal space.

What all this means, of course, is that these anti-gun radicals need to stop bullying innocent gun owners. Don't these idiots realize that there is nothing in the Constitution that says you have a right not to have your phone number published on YouTube?