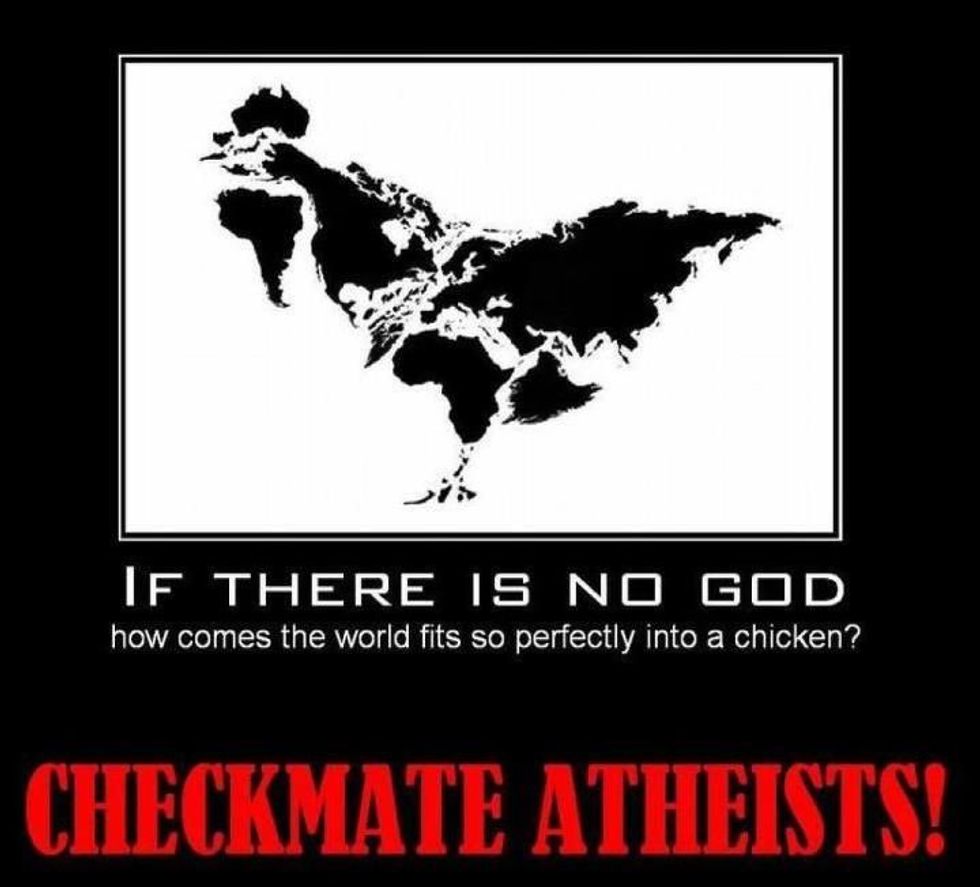 The rampant march of militant atheism continued this week, just destroying families and making Baby Jebus cry again, as the demon-spawned hordes of the Freedom From Religion Foundation (FFRF) forced Glencoe, Alabama (pop. 5160), to take down its "Christian Flag" from out front of the town's police station and city hall. Maybe they can make up for it by starting every public meeting with a prayer or something, just to make sure Alabama doesn't suddenly go all secularist.

WBRC reports that Glencoe's Christian flag "has flown over the police department as far back as the 1990s, when the late police chief B. J. Alexander took credit for raising it for the first time."

The decision to remove the flag was made last Friday by the City Council after it received a letter threatening legal action from the FFRF:

FFRF had sent a letter saying the group had received a complaint from an unnamed local citizen about the flag flying on city property. The flag flew in front of the police department, adjacent to city hall, alongside the American flag and the state flag of Alabama.

Obviously, the top priority of town gossips is now going to be the identification and social isolation of the troublemaker, because America is a Christian nation founded on the Bible, plus guts and guns, as we all know.

Mayor Charles Gilchrist said that the town acted out of fiscal self-preservation, explaining that the city attorney warned that another town (King, North Carolina, mentioned in the FFRF's letter) settled a similar lawsuit for $500,000 and ran up legal bills of $50,000. Gilchrist was quite careful to make it clear that he meant no insult to Jesus and that he was not acting out of any reverence for the U.S. Constitution's Establishment Clause:

"That would just about ruin us," said Gilchrist, by phone Friday night. "That's what they do, they pick on these smaller towns that can't defend ourselves."

Mean old big-city atheists, picking on poor little towns that can't afford to ignore the dumb old Constitution -- or at least the evil perversion of the Constitution as interpreted by unelected lawyers in Washington. Gilchrist says he's still looking for ways in which the town can once again legally promote Christianity, and is hoping that maybe the "American Center for Law & Justice" can help find some fancy loophole by which the town can put the flag up again, because it's just not right, is what it is. Gilchrist told the TV station that while he wasn't happy about being forced to comply with the law, he would for the time being: "I have to look out for the best interests of the city," he said.

The WBRC story reports, without the least trace of irony, that Glencoe is not exactly hurting for public expressions of Christianity, including that very flag:

A similar flag still flies next door at the First Baptist Church of Glencoe, where such a flag is unarguably legal.

Hmmm. If only there were some way the good people of Glencoe could find a way to see that flag, even though the one at the police station/city hall has come down. Confounded atheists have completely trampled all over their rights to have another one a few meters away.