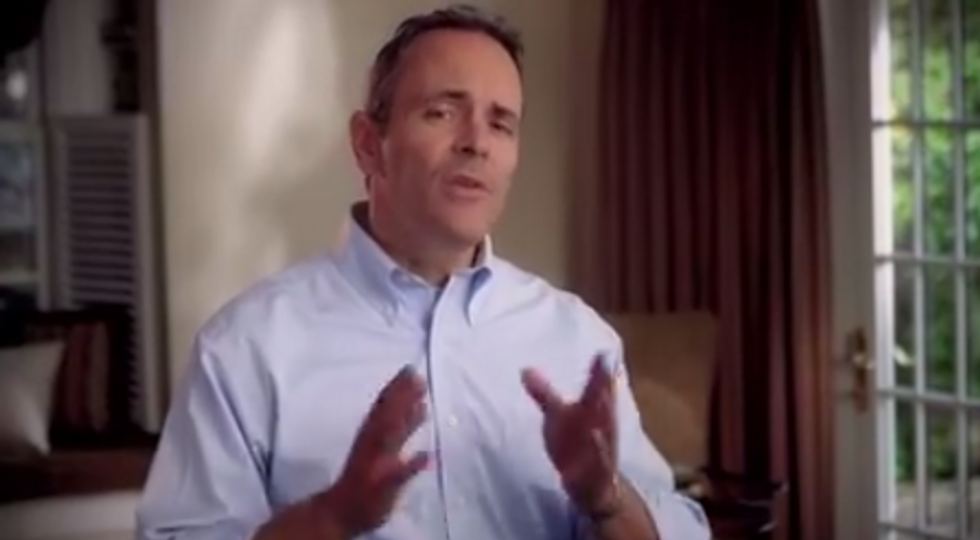 Kentucky's a hell of a drug. Extra-crispy wingnut Matt Bevin was too crazy even for Republican primary voters to send him to the Senate in place of RINO Majority Leader Mitch McConnell in 2014, so the whole state decided Bevin is juuuuuuuust right for the governorship.

We're not saying outgoing Democratic Gov. Steve Beshear was any dream beau or anything; he led Kentucky's doomed mission to maintain its ban on marriage equality to the very bitter end, even after all the state's judges and Attorney General Jack Conway -- the Democrat who just lost to Bevin, oy -- told him that was big fat waste of taxpayer dollars. Beshear is what passes for a Democrat in Kentucky, because Kentucky.

But Matt Bevin is what passes for cray-cray in Any Town, USA. And yet.

Let us stroll down the memory lane of his primary race against McConnell, to refresh ourselves with the batshit madman nutso Kentucky elected Tuesday night, to be its new boss.

We first met the millionaire tea party darling in the summer of aught 13, when he caused the various teabagger splitters to quarrel amongst themselves about whether they were or were not Standing With Mitch. We soon learned that what little we knew about Bevin probably wasn't true anyway, since he apparently inflated his LinkedIn profile with extras like "graduated from MIT." (He did not graduate from MIT.)

Bevin continued to distinguish himself by opposing renewal of the Violence Against Women Act, on the grounds that it was "unconstitutional" to include Native Americans, immigrants, and lesbosexuals in the bill. He knew this the way all Republican dudes know stuff about chicks and stuff: He has a lady-wife and girl-daughters.

The two men held the exact same view, of course; the distinction was that McConnell pretended he supported VAWA, even though he voted against it. Bevin made no such gestures.

We subsequently discovered, from Bevin's own mouth, that he holds the obligatory views on marriage equality:

"If it’s all right to have same-sex marriages, why not define a marriage — because at the end of the day a lot of this ends up being taxes and who can visit who in the hospital and there’s other repressions and things that come with it — so a person may want to define themselves as being married to one of their children so that they can then in fact pass on certain things to that child financially and otherwise,” Bevin said. “Where do you draw the line?”

Naturally, he also believes it was "utterly unnecessary" for Rowan County clerk Kim Davis to have gone to jail, just for the crime of loving Jesus -- and being held in contempt of court -- too much. He even has a plan to protect Davis's right to not do her job and everything.

He's quite the catch, that governor-elect, ain't he? And we haven't even gotten to the cocks yet.

But it’s interesting when you look at cockfighting and dogfighting as well. This isn’t something new, it wasn’t invented in Kentucky for example. I mean the Founding Fathers were all many of them very involved in this and always have been. [...]

I’m going to defend the right of people to freely gather and discuss whatever they want to. I’m a believer in the Constitution and in the First Amendment, not just for raising money but also for freedom of speech.

In case you were wondering whether it was possible for someone to defend cockfighting on the grounds that the founders loved cock, and also states' rights, yes, it is possible. Not advised, but possible.

Bevin went on to lose the primary battle against McConnell, but looks like he's won the war against Kentucky. Enjoy your new governor, Bluegrass Staters, and the nifty plans -- like undoing your Medicaid expansion you've so enjoyed, thanks to Obamacare, and "repealing" Common Core -- he has in store for you.