Meet The Genuine Death Cultist Behind All Those White People With 'Blacks For Trump' Signs! 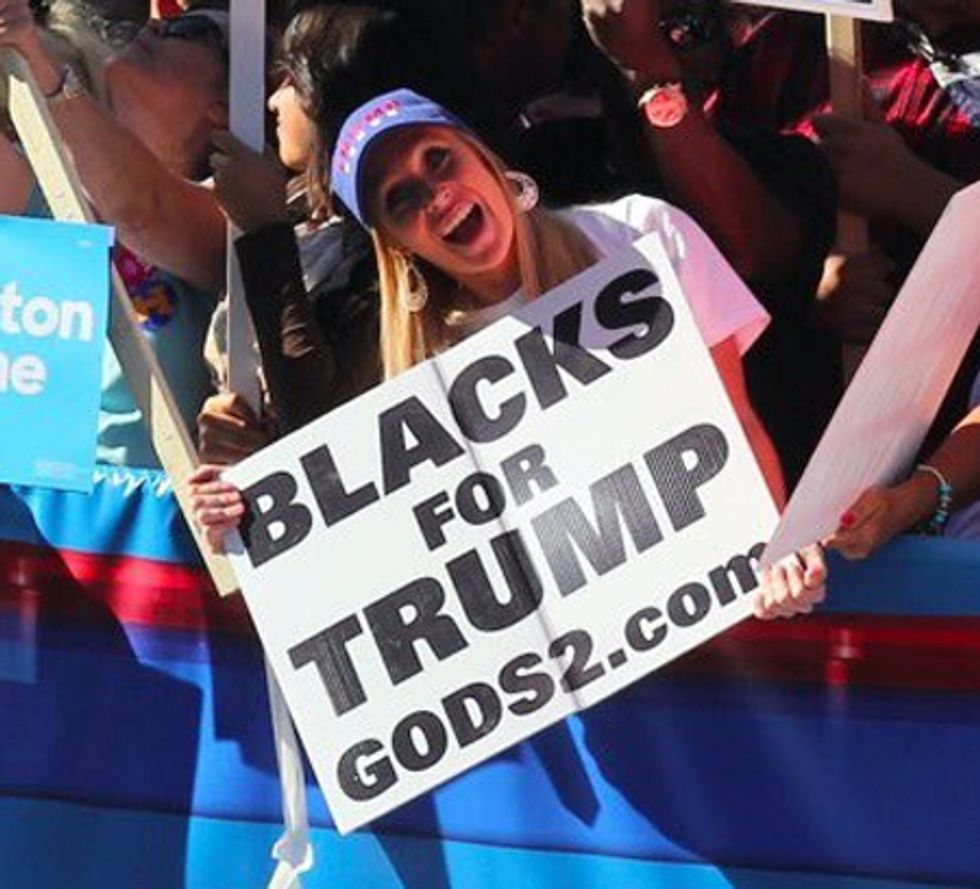 In the last couple weeks, Donald Trump rallies have featured a whole bunch of people waving "Blacks For Trump" signs in the stands behind the Great Man -- sometimes even by black people, but also often held by white people who are obviously very sympathetic to the message, or are every bit as confused as the Texas gent waving an "I regret my abortion" sign at an anti-choice rally a couple years back. But Trump sure is proud of all those folks, who are there to prove the polls are wrong and that the blacks love him:

So clearly there's a wave of support for Donald Trump among blacks and white people who'll hold any Trump sign they're handed. As it happens, those signs, and the t-shirts reading "Trump & Republicans Are Not Racist," are the product of a perennial fringe political activist from Florida who goes by the moniker "Michael the Black Man," AKA Maurice Woodside, AKA Michael Symonette. Turns out he has a fascinating background:

He's also a former member of the murderous Yahweh ben Yahweh cult, which was led by the charismatic preacher Hulon Mitchell Jr., who was charged by the feds in 1990 with conspiracy in killings that included a gruesome beheading in the Everglades.

That's not good! Michael was one of 16 Yahweh cultists charged with conspiring to kill two people, although he and six other members of the group were found not guilty. Mitchell, the cult leader, was sentenced to 20 years. Michael changed his name a couple times and became an anti-gay, anti-liberal preacher man with a real talent for glomming on to high profile rightwing figures including Rick Santorum, Glenn Beck, and now Donald Trump. He also really, really hates Barack Obama, whom he's quite sure is the literal Antichrist and calls "The Beast," and worries that Obama's support for child support could reinstate slavery for black men.

Michael the Black Man is also no fan of Hillary Clinton, telling Miami New Times in a phone interview that she is definitely no friend to black people:

"One reason is because Hillary's last name is Rodham, and their family members are Rothchilds, who enslaved 13,000 slaves as collateral," he says. "She's also on camera kissing the head of the Ku Klux Klan and saying, 'That's my mentor.' That's all on my website."

The last is a reference to Robert Byrd, who, if you want to get all technical about it, was never the "head of the KKK," renounced the group in the 1950s, and apologized for it for the rest of his life. That Rothschild stuff seems pretty solid, though.

Michael's website, which we'd rate as about .85 Timecubes worth of crazy, prominently featured on the signs, is full of top-notch conspiracy weirdness like this:

And big word-salad essays like this one, titled "WHITE MAN & BLACK MAN WAKE UP!! (ISHMAEL) (arabs & East Indians) are killing us (Americans BLACK & WHITE) all over the world on TV," which make a Dr. Bronner's soap bottle seem refreshingly lucid:

The piece ends with the reassurance, "REPUBLICANS ARE NOT RACIST they are still against slavery (high taxes)." So that's good to know.

Not that Michael has burdened Trump with the full range of his knowledge or any information about his background. He told New Times,

"I didn't get to talk to him about any of that. I just came there with my signs," Michael says.

But he says Trump shouldn't worry about his past. "Yahweh is the one who told me white men are your brothers. Before that, I hated all white people. I hated their guts and wanted them dead," he says.

So there you go -- Trump is definitely having some success with a black voter, and if you ever hear anyone suggest Trump might be racist, or that Trump appeals to hate groups, you can cite Michael as an example of someone who's past all that hate. Just don't get him started on those filthy Canaanites.