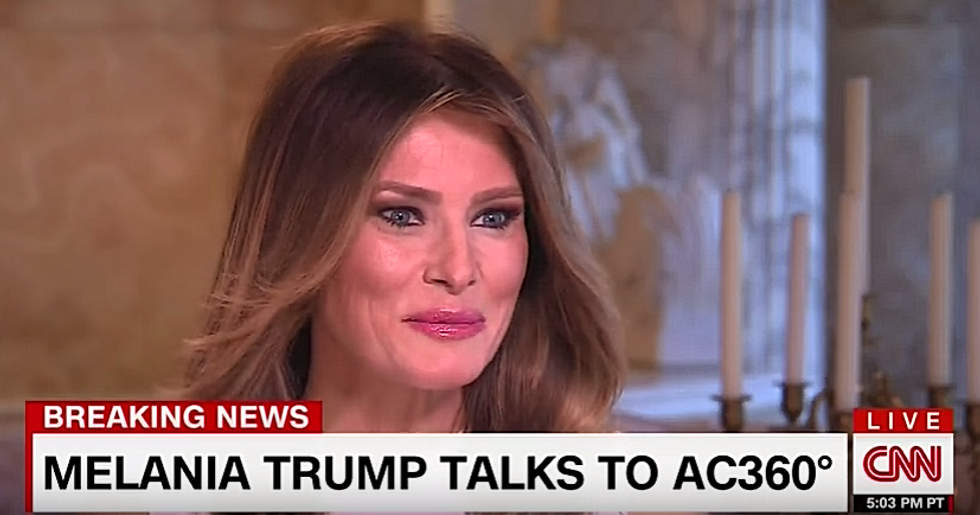 The election has turned around and Donald Trump is going to win by one million points on Election Day, because Melania Trump sat down with Anderson Cooper to set America straight on how it's OK that her husband talks all rapey. For one thing, this all happened because a lot of people are "against my husband." Also it happened because Billy Bush is Big Man On Campus and everybody who's around him wants to be just like him, even if it means trying to look all badass by saying you grab women by the pussy against their will:

MELANIA TRUMP: I said to my husband the language is unappropriate, it's not acceptable. And I was surprised, because that's not the man I know. [...]

I wonder if they even knew that the mic was on, because they were kind of a "boy talk," and he was lead on, "egg on," from the host, to say dirty and bad stuff.

ANDERSON COOPER: You feel that the host Billy Bush was sort of egging him on?

Wait a minute, wait a minute, WAIT WAIT WAIT. We have heard this argument before, about how Trump only started saying freak nasty stuff because he was in the presence of the great Billy Bush. It was the excuse given by Donald Trump, as played by Alec Baldwin, on the season premiere of "Saturday Night Live"!

TRUMP (ALEC BALDWIN): Come on, Brooke. I was trying to look cool? I mean, what normal red-blooded American doesn't want to impress THE Billy Bush?

Cool, so one of Melania's answers came from SNL.

Back to the actual real life Melania Trump interview, she explains that everyone's out to get her poor husband Donald:

I was not surprised that tape came out ... many people, from the opposite side ... they want to damage the campaign. And why now? Why after so many years? Why three weeks before the election?

Maybe they are trying to prevent America from being destroyed by this one thin-skinned orange gargoyle baby, and figured now was as good a time as any.

Melania has more thoughts about her husband's "Locker Room Talk":

TRUMP: It's kind of two teenage boys, actually they should behave better, right?

TRUMP: Correct. Sometimes I said, "I have two boys at home, I have my young son and I have my husband."

OK, that was actually sort of a human moment, and we get that Melania is in an untenable position, defending her yucky, disgusting, immature husband. She's wrong, but we get it.

Melania said she agrees with Michelle Obama that groping women against their will is sexual assault, but says the veracity of such accusations should be determined in court. Moreover, she believes her husband when he says his itty-bitty front hooves have never violated a lady, which means she does not believe those mean accuser ladies:

This was all organized from the opposition. With the details ... did they ever check the background of these women? They don't have any facts.

And so on and so forth. Just watch the interview if you want. Melania Trump is standing by her man, and that's fine. SOME MIGHT SAY that Melania, in defending her husband, is doing the same thing Hillary Clinton did back in the day, when her husband Bubba was being accused of sexual untoward-ness by all kinds of ladies. Weird how it's OK for Melania to do that, but not for Hillary, huh, well, hmmm, DOUBLE STANDARD!

Also, Melania says the election is being #rigged by the #media, so we're glad to hear a casual relationship with reality isn't putting a strain on their marriage.