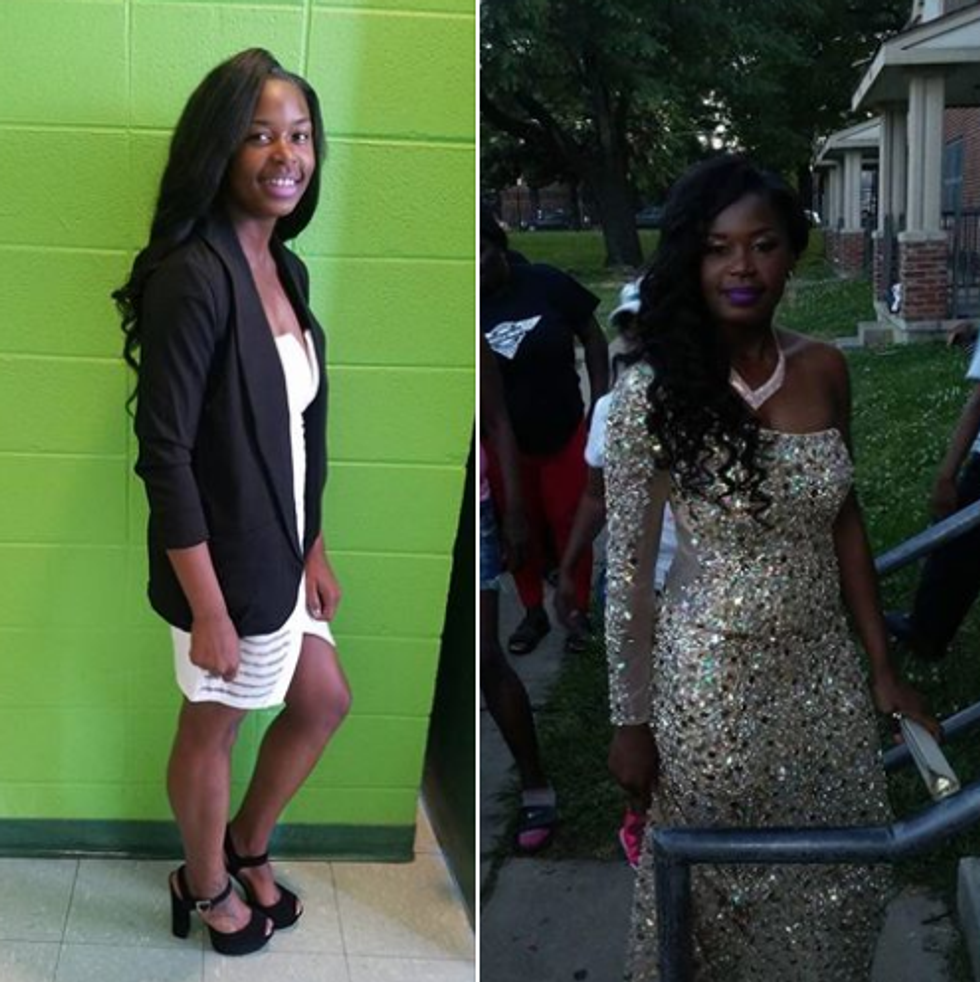 Saturday night in downtown Memphis was beautiful, until around midnight, when a 19-year-old man, Kwasi Corbin, fired an assault rifle into the crowd gathered near Beale Street, taking the life of 18-year-old Myneishia Johnson, a high school student and single mom who would have graduated this coming weekend.

Yr Wonkette was nearby at the time, and wondered why police seemed to be acting like there was an active shooter threat downtown. It was unusual because, despite what you read in Most Dangerous Cities lists, downtown Memphis is incredibly safe.

Well! As we said, Myneishia was set to graduate this weekend from Booker T. Washington High School. It's now been announced that her one-year-old son, Kylen, will walk to receive his mom's diploma in her place, and would you believe a Concerned Citizen White Guy is just appalled by the message this sends to Our Inner City Youth? (Read: Not his inner city youth, except for when he is sticking his dumbass nose in with his opinion.)

He sent his thoughts to Booker T. Washington's principal, Alisha "Lisa" Coleman-Kiner, in an email:

White Dude can't even believe you would "acknowledge" and "celebrate" a little baby who will never know his mom, who obviously should have been home taking care of him in the first place, hrmph! And the father is obviously absent, because White Dude has heard about these things on Fox News!

So Principal Coleman-Kiner decided to call White Dude into her office, via a public Facebook post, which we will share with you in all its Mama Bear glory, because principals like her need to be cheered. (She calls him "lady," probably because she assumed that "Kelly" was a lady. Wonkette journalismed and found something different.)

Thank you so much for your unsolicited ‘food’ for thought. After regurgitating the washback you just emailed (as it was definitely not ‘food’), I offer the following appetizer, entrée, and dessert for you to consider:

1. Never email a high school Principal, who is also an English teacher, without checking the grammar and spelling in said email. In case no one ever told you, these errors sincerely diminish your validity. #2Timothy2:15 #Study

2. Never send a formal email of rebuke without first 'fact checking’ your claims. That’s something else your English teacher should have taught you. For example, who told you that no one knew who the father is? Where were you when he couldn’t stand under the grief on Sunday at the candlelight vigil? How surprised would you be to learn that both the paternal and maternal grandparents have been actively involved in this child’s life since he arrived? #Proverbs6:16-19 #Abominable

3. Stereotyping, as a persuasive device, is an ineffective use of propaganda that allows the person using the device to draw lines around groups of ‘good’ and ‘bad’ people. When you talk about people from the 3rd person point-of-view (‘the attitude and culture of the inner city youth needs…”), you turn those people into objects, which can then strip them of human rights. Side note: I had my first college degree and had been married for some years before I had my daughter, and, even I went out every now and then – without my child. How is it that you know that my student was an irresponsible parent, again? #Deuteronomy10:18 #GodDefends

4. Just in case you didn’t know, having a baby is NOT the sin. Pre-marital sex, if we’re counting, is the actual sin. God loves babies. In fact, whenever there is a problem in the world, HE sends a baby with the answer (i.e. Jesus). Because my student was such a great person, maybe God decided to use her as a conduit between her son and the world to provide an answer. That would help make sense (especially for me) of all of this foolishness. Side note: Pre-marital sex may not be YOUR sin, but it only takes one sin to send you to hell, and God never said that sin was only pre-marital sex, and HE loves babies. #Jeremiah1:5 #Psalm8:2 #PurposeInPain

5. You have NO idea how hard my student was working to overcome every single obstacle in her life. She worked a job every day, she kept her OWN baby (we had to ask her if we could keep him), she played on the basketball team, she did well in all of her Honor’s classes, she kept up with her younger siblings and made them come to school, and, most importantly, she NEVER missed one day of school. There are other issues that she had to deal with that I refuse to share, but just know that I know a whole slew of adults who would be in an insane asylum if they had to live with one tenth of her issues. #Matthew12:36,37 #EveryWord

6. This baby has only lived one year. He will NEVER know his mother. He will only have what we have shared, the videos that have been recorded, and what people have written to begin to understand the love she had for him. We WILL add this to his treasure chest of memories. #Matthew25:40 #WeLoveKylan

7. Because SEVEN is the number of completion, and symbolically the number of days my student had left to walk across the stage when her life was AGGRESSIVELY snatched away from her, my last point is: Stay. In. Your. Lane. This sweet baby meant too much to me for me to remain professional if I receive any more emails from judgmental folk who sit in the air looking “down” on folk they don’t deserve to sit next to. #Matthew1:7 #AlishaKiner #NotInTheMood

And then she dropped the mic, because there is literally nothing left to say. Wonkette wishes Booker T. Washington a successful graduation, and wishes White Dude would get off our fucking lawn.