Men's Rights Activists Invite Men To 'Stand Their Ground' Against Uppity Women, What Could Possibly Be Wrong With That? 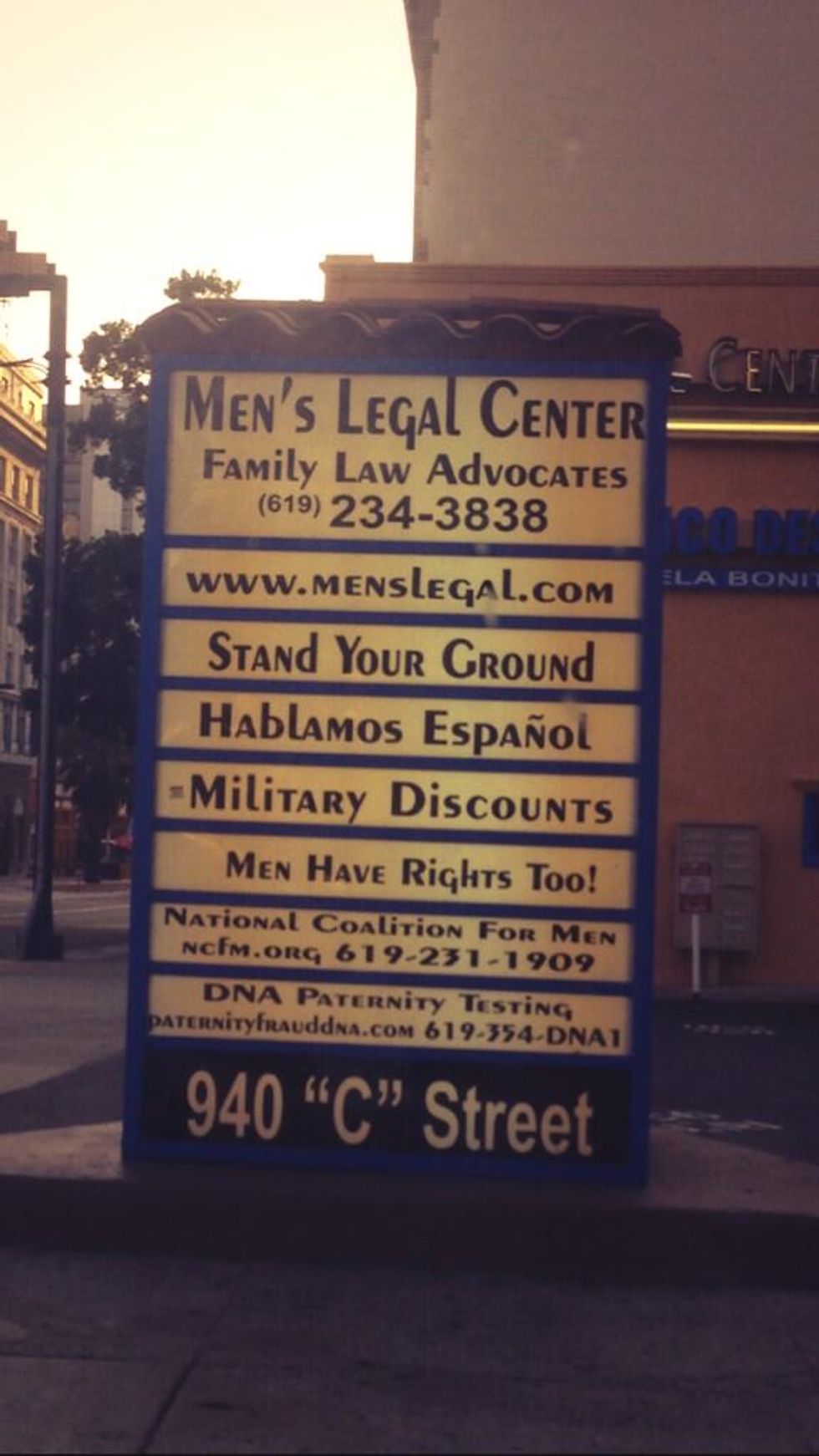 You know how men are the real victims of domestic violence and rape and sexism and discrimination and everything else? Hey, stop laughing, it's true! It says so on some websites created by men for men. It is a FACT that since creation, women have ruled everything and forced the weaker sex -- men, obviously -- to live under the oppressive thumb of the matriarchy, subject to all manner of violence and sometimes commercials on television that make men look like morons and/or potential rapists. It is awful. It is the worst. But finally, finally, there is something men can do to stand up against the misandry and fight back.

They can stand their ground. No, not the kind where you hunt down a black kid in a hoodie and kill him dead because his candy looks threatening. The kind where you add your name to a letter, which is like shooting someone but WITH WORDS. For all of you bitter divorced dads out there who can't believe you have to pay child support because the goddamned feminists and also you heard about a guy whose wife slapped him once, there is finally a safe space for you.

It's time to stand our ground.

This web site is a dedicated to the issues of gender and sexism. It is meant to be a place that is friendly towards men and women, boys and girls, and offers an arena to speak your truth and stand your ground. For this purpose we have forums available. We now have a beginning listing of links to masculine friendly web sites, a letter on domestic violence for you to read and sign and a boycott page that lists companies to avoid due to their histories of male bashing and misandry. You can also sign up for our low level mailing list with information about this years Men's Equality Congress to be held in June in Washington DC.

We are glad you found us. Good luck to you in standing your ground.

Well, if there's anything the Internet is short on, it's "masculine friendly web sites."

Also, letters you can sign addressed to ... well, actually, this one isn't addressed to anyone, but once they figure out where to send it, they are going to raise all kinds of hell for ___ until ___ caves.

We the undersigned feel strongly that domestic violence is a horrible tragedy for men, women, and children. We have serious concerns that the services in Maryland for this terrible problem are decidedly discriminatory. The available services in our state focus on women who are victims but ignore our men in need. The organizations that run these services seem to function with assumptions that men are consistently the perpetrators and women perpetual victims. Neither of these is the case nor helpful. The following letter written by one of the undersigned offers details about the reasons for our concern.

But you brave souls who are finally read to speak truth to power and stand your ground and fight back against The Woman can do more than add your names to a letter; you can boycott stuff too! Like Budweiser. And Burger King. And Mike's Hard Lemonade. Because something must be done about ads like this (from 2004, because this new advocacy group is super timely):

Mike's Hard Lemonade has released a new commercial that condones violence against men. A man and a woman are sitting at the bar and another man walks up with a series of blatantly cheesy and juvenile pick-up lines in an attempt to impress the woman. He's clearly portrayed as a big jerk. The first and second attempts draw eye rolls. On the third attempt, the man that's with the woman attempts to tell the offender to leave, but is cut off at the pass when the woman head butts the pick-up artist, knocking him to the floor. Then, apparently, all is well again. The violence seemingly justified. As always, imagine if a man head butted a woman in an ad. The horror!

What kind of sick sexist-but-against-men world do we live in where an ad like this is considered acceptable? Just because a guy makes repeated unwanted advances to woman in a bar does not automatically make him a "big jerk," so that is obviously just a sexist stereotype, duh. And what kind of message are we sending to the children? Do we really want them to grow up in a country where all men are supposedly equal but a "pick-up artist" can't even harass a woman in a bar without, like, consequences? What is this, Soviet Russia?

And if that weren't bad enough, Kentucky Fried Chicken once ran a campaign to raise money for breast cancer research, which is clearly sexist and part of the War on Men and part of a systemic pattern of discrimination against men:

This unequal male status (prejudice) pervades society into present day even under the façade of “equality” when discriminatory efforts, even laws are made to accommodate. A commonly accepted double-standard and sub-standard is that part of being “a man” is taking it and accepting less. This standard is not acceptable to a real man or to a person who believes in equal justice for all, but one based on a primitive, ages-old chivalry mentality and result of centuries of male servitude. Where would our country be if this were the case and mindset that first determined the foundation of our country, rather than based on the premise of equal justice for all?

We are now curled in the fetal position and sobbing SO HARD for the prejudice that pervades society and the myth of men's "equality" and all the double-standards and how fucking hard it is to be a man in a world where men have no power and no voice and no influence over anything at all (except for everything because, you know, of how men still control pretty much everything, but whatever).

Fight on, brave men, fight on. We ladies would join you on the frontlines, but we're a tad busy at the moment earning 70 cents for every dollar you make; keeping up on the proper way to dress and behave so you don't rape us; begging you to not defund our health care because something something Jesus preborn something life; and trying to not get evicted for "disorderly conduct" when our ex-boyfriends beat the shit out of us.

But as soon as we use the power of the matriarchy we control to overcome all of that, we will totally join you in your fight against the worst kind of sexism there is.