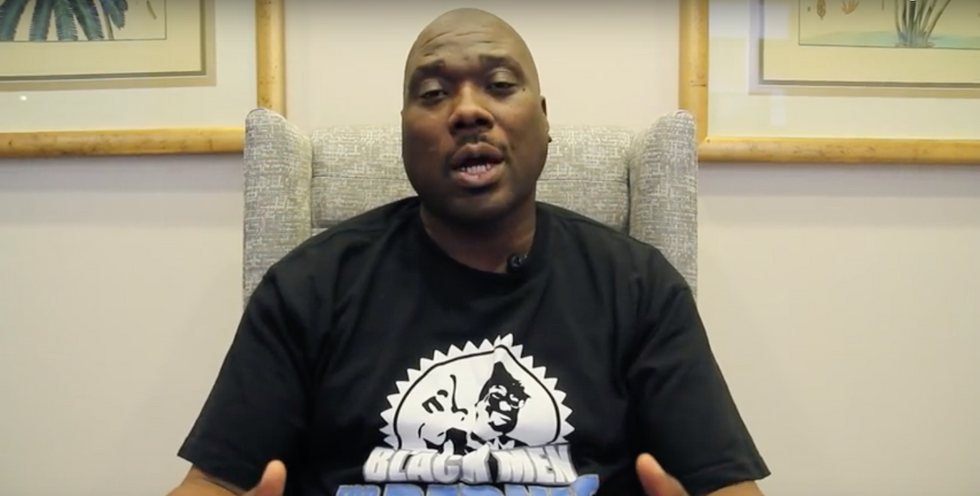 Political hacktivist Bruce Carter wins this year's Profile in Shame after Bloomberg revealed he was a dunce, dope, and a sucker in the Trump campaign's supervillain evil attempts to suppress the black vote.

If the splashy, counterintuitive story, which circulated on such conservative websites as Truthfeed and Infowars, wasn't exactly fake news, it was carefully orchestrated.

The story’s writer—an employee of the conservative website run by Steve Bannon before he took over Donald Trump’s campaign—spent weeks courting activist Bruce Carter to join Trump’s cause. He approached Carter under the guise of interviewing him. The writer eventually dropped the pretense altogether, signing Carter up for a 10-week blitz aimed at convincing black voters in key states to support the Republican real estate mogul, or simply sit out the election. Trump’s narrow path to victory tightened further if Hillary Clinton could attract a Barack Obama-level turnout.

Let's be clear: This has nothing to do with Bernie Sanders or the DNC or anything else that might explode the comments section. This is about Carter being so Diamond and Silk dumb that he ignored the obvious odor of sulphur in the room when meeting someone from Breitbart and agreed to help Donald Trump's presidential ambitions, which were symbolically equivalent to kicking black people in the face repeatedly with a steel-toed boot.

(Also, real quick side-note! Wonkette may be partisan commie liberal scum, and yet we still have never secretly organized campaign operatives and funneled money to 'em. We must be slipping.)

Of course, persuading black people to support in any significant numbers Donald Trump, who did this and said this, is impossible without the mind control powers of David Tennant's character from Jessica Jones.

So, the more realistic goal was to demoralize black voters with a shock-and-awe assault of racial nihilism and have them sit out the election. This is the exact opposite of everything Martin Luther King did. No black man should have the position of "Bizarro Martin Luther King" on their resume.

“If you can’t stomach Trump, just don’t vote for the other people and don’t vote at all,” Carter, 47, recalls telling black voters. It’s the message he says the Trump campaign wanted him to deliver. “That’s what they wanted, that’s what they got.”

The work Carter says he did, and the funds he was given to do it, also raise questions as to whether campaign finance laws were broken.

Narrator: We're guessing they were.

The group Carter founded, Trump for Urban Communities, never disclosed its spending to the Federal Election Commission—a possible violation of election law. In hindsight, Carter says, he believed he was working for the campaign so he wouldn’t have been responsible for reporting the spending.

His descriptions of the operation suggest possible coordination between Trump’s campaign and his nominally independent efforts. If there was coordination, election law dictates that any contributions to groups such as his must fall within individual limits: no more than $2,700 for a candidate. One supporter far exceeded that cap, giving about $100,000 to Carter’s efforts.

Yeah, so he's going to jail. Whiter men than he have fallen in the wake of Trump's corruption. But they at least had their dignity and self-respect... kinda. Carter wasn't even able to parlay his tap-dancing minstrelsy into a prominent White House position that no one could ever possibly live to regret. And a year after Trump's election, Carter was still doing his best Samuel L. Jackson from Django Unchained and insisting that Melanie's husband was the "greatest thing that happened for urban communities and Black voters." What does he have to show for it all? He's already been disinvited to every black cookout across the country, which is its own form of prison. I hope he enjoys his life sentence of unseasoned over-raisined potato salad.

Bruce Carter, when U see yr picture in the dictionary next to "race traitor," don't be surprised. U worked hard 4 that disgrace. That U would aid & abet such as #DotardDon, a despicable dimwit, is incomprehensible. U haven't a clue. U R an idiot. https://t.co/cRhGmoKdkT