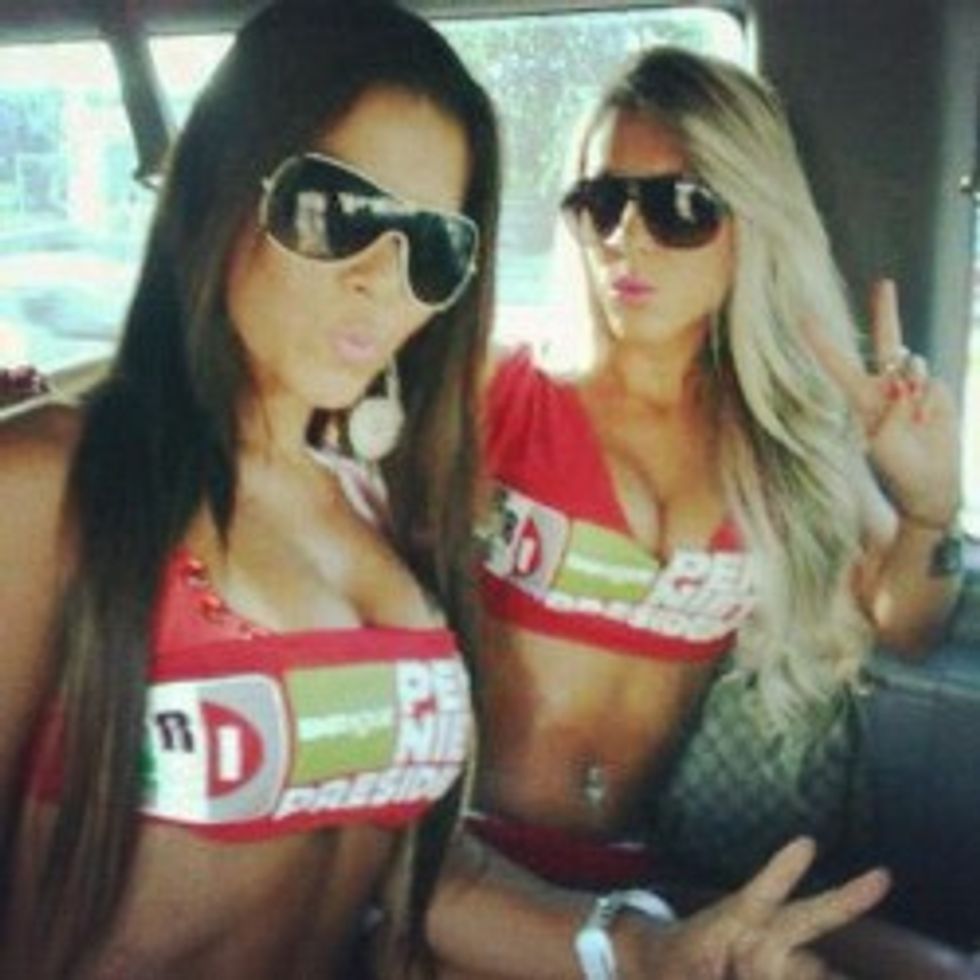 Assumed Mexican president-elect Enrique Peña Nieto is a snappy dresser. He's 45 years old with a handsome baby face. He has a molded Pompadour. He poses for the cameras"like Brad Pitt and DiCaprio." He's been compared to John F. Kennedy. He's a political movie star, married in a storybook top hats n' tails wedding to a telenovela actress (who created her own reality show featuring her on the campaign trail, "thinking and feeling."). And he has thousands of drooling, swarming, huaraches-in-the-air female followers "pressing against barricades, screaming "Enrique bonbon!" "Peña, you're hot," and "I want you on my mattress." Well, based on preliminary election results (final count due today), it looks like they all voted for him too, which is as close as they will get to his perfect hair.

It's all about the fantasy. And the fantasy is about to come true. Except when he goes off script, goes rogue, shall we say. Then everything falls apart. Does any of this sound familiar?

In a Palinesque encounter with some hard-nosed, "gotcha" media goons at a Guadalajara book fair, Peña Nieto made an appearance to promote a book he allegedly wrote, Mexico: The Great Hope, and answered questions at a press conference. He was asked by Spain's El Mundo to name the three books that changed his life. He said, "All of them, Katie," and continued to babble incoherently (while thoughtfully resting his finger on his nose) for almost four minutes. In desperation, he pulled the bible out of his hair. Of that esteemed book, he read "Parts of it, Katie. In my youth." He then said, "I liked The Eagle's Throne by Enrique Krauze" (which was written by Carlos Fuentes). In response, Carlos Fuentes said, "This man hasn't read me, he has the right of not doing so. What he doesn't have the right to do is to aspire to be president of Mexico based on ignorance." Here is the infamous press conference, for your subtitled viewing pleasure.

As the perfect macho counterpart to Palin's Mama Grizzly, Peña Nieto, when asked at another press conference if he knew the minimum wage or the price of a kilo of tortillas, made a wild (wrong) guess and when challenged declared, "I'm not the housewife." He later said that his comments were taken out of context. He really meant to say that he is not the housewife in his house. Ohhhhh. That wasn't good enough, so he apologized to housewives and tortilla tossers all across Camexilot.

In 2011, The Economist caught him in a full-on lie misstatement, when he claimed "that the murder rate in Mexico state had fallen by more than half during his six-year term. ... This was particularly amazing given that the national murder rate more than doubled during the same period."

We heard rumors that like Obama, Peña Nieto has to read from a teleprompter. Since this immediately means they're both idiots, Peña Nieto would do well to take a tip from Sarah Palin and write his presidential acceptance speech on his hand.