Michael Cohen: I AM NOT A CROOK! 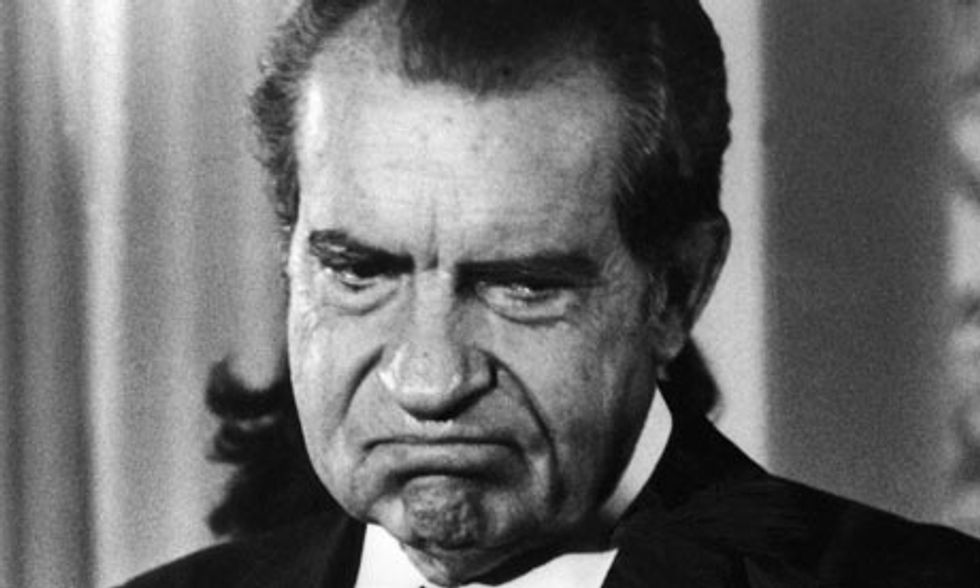 'I could have told him about tapes. But noooooo'

"I would not like to be a Russian leader. They never know when they're being taped." -- Richard M. Nixon

Michael Cohen, that little scamp, had a reputation for taping conversations with just about everyone, the Washington Post reported at breaking-thirty last night, so a lot of people in TrumpWorld say they're worried the FBI may have scooped up a whole lot of juicy audio in that raid on Cohen's office Monday. Of course, since he's an attorney, there's all kinds of boring due process stuff investigators will have to go through before any recordings actually make it into a potential prosecution, if at all. But if the "people familiar with the subject" are right, there may be recordings of Cohen talking to Donald Trump, Stormy Daniels, or possibly fulminating to Billy Graham about how there are too many Jews in the media. Anybody with secret tapes ends up doing that.

known to store the conversations using digital files and then replay them for colleagues, according to people who have interacted with him.

“We heard he had some proclivity to make tapes,” said one Trump adviser, who spoke on the condition of anonymity because of the ongoing investigation. “Now we are wondering, who did he tape? Did he store those someplace where they were actually seized? . . . Did they find his recordings?”

Cohen liked to show off his recordings sometimes, to prove he had the goods on people, which sounds entirely in character for a lawyer and personal fixer straight out of central casting, as Trump might put it. One of the sources said Cohen regularly recorded business calls so he could have leverage over the person he was talking to, and added that when Cohen boasted about stuff he'd recorded, he'd point out that under New York law, only one party in a conversation has to consent to the recording, which would be he.

And in fact, the belief that Cohen routinely recorded his conversations was one reason people on Trump's 2016 campaign avoided Cohen like that one mean kid in elementary school who always wore a dirty white t-shirt and whose breath smelled like old loogies:

In one instance, Cohen played a recording of a conversation he had with someone else to a Trump campaign official to demonstrate that he was in a position to challenge that person’s veracity if necessary, an associate recalled.

Cohen indicated that he had something to use against the person he had taped, the associate said.

And then he'd push you down and take your lunch money and breathe right in your face.

If recordings relevant to the investigation of Cohen -- for campaign funding violations, payoffs to women Trump sexed, and for all we know, the Lindbergh kidnapping -- do exist, they could be among the strongest evidence in a possible trial or effort to get Cohen to testify on related matters (he seems too stupidly loyal to Trump to flip, but who knows?). But there's a catch, and it's a beaut, because of all that Due Process stuff wingnuts are insisting has gone completely out the window in the Cohen raid. (They are kind of stupid that way.) No, there's not going to be big evil party where Rod Rosenstein, Robert Mueller, Hillary Clinton, and George Soros sit around in pajamas listening to the recordings and painting each other's toes. Or at least, before that slumber party can start, the recordings would be subjected to the taint team:

Federal investigators would not automatically get access to any tapes that might have been seized in the raids. First, the recordings would be reviewed by a separate Justice Department team and possibly by a federal judge. The review is designed to protect lawyer-client privilege and to be sure that the conversations turned over are within the terms of the search warrant, legal experts said.

They noted that the privilege accorded to attorney-client communications does not apply if the conversation was conducted to further commission of a crime or fraud.

We should note that Cohen apparently did his surreptitious recording all on his lonesome, so if there are any suspicious 18-minute gaps, that's all on him. The soul of Rosemary Woods can rest easy, unless of course she peed on Obama's bed, too.

Also, in what's probably the saddest detail in the WaPo story, there's this speculation by another source, which seems credible enough for Cohen and any other of the beta cucks who orbit Trump and try to emulate The Great Man Himself:

One outside Trump adviser said Cohen may have begun recording his conversations in an attempt to emulate his boss, who has long boasted — often with no evidence — about secretly taping private conversations.

Is Donald Trump Recording People Like A Common Nixon?

He likes to watch.

The examples that follow are all about Trump's own history of bragging and bluffing about recording people, like his "James Comey better hope that there are no ‘tapes’ of our conversations" tweet, or his frequent assertions to reporters that he was recording them, which often turned out to be false. Disappointing -- we wanted more about what that "outside Trump adviser" might have known about Cohen and his taping habits. But we can still hope -- maybe in coming weeks Trump will confront his erstwhile fixer and ask him what possessed Cohen to go around recording people, building evidence that could hurt him. Then, in tears of frustration and anguish, Cohen can shout, "You, all right?! I learned it by watching YOU!!!"

Yr Wonkette is supported by reader donations. Please click here to send us money. And no one ever has to hear that tape of you admitting you cook with canned clams, capiche?