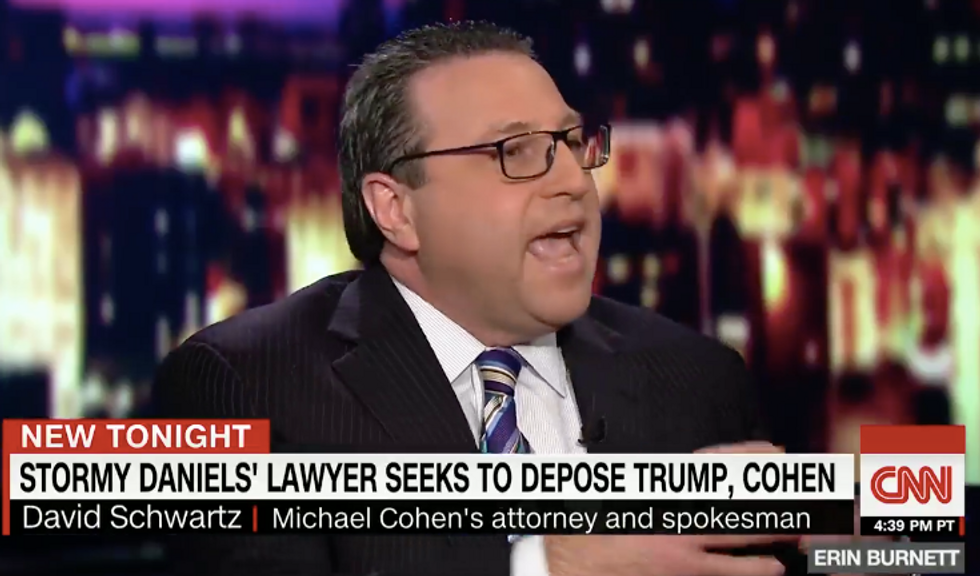 Here is Michael Cohen's lawyer and spokesman saying categorically that Cohen negotiated agreement w/o ever telling his client DJT anything abt it and made him a party to the agreement w/o any intention of telling him abt it or having him sign it. @MichaelAvenatti @renato_mariotti pic.twitter.com/xqNLvcx1uX

The president was not aware of the agreement. At least Michael Cohen never told him about the agreement, I can tell you that. [...] He wasn't told about it. Michael Cohen left the option open, that's why he left that signature line, the option open to go to him. He chose not to. He chose to bind the LLC, EC, LLC, and Stormy Daniels into the contract.

Live shot of every lawyer in America last night.

OKAY, THEN. Let's break it down here.

Care to weigh in, Michael Avenatti?

Michael Cohen’s Attorney May Be a Worse Lawyer Than He Ishttps://t.co/LimN2IyV29 via pic.twitter.com/YHhkWy7lMk

But wait, there's more! Because if there's something missing here, it's mansplaining.

There's also this luscious mansplain moment. Trump Cheese Lawyer to Erin Burnett: "If you do understand, **and you do somewhat **, you understand the Trump structure, and Michael Cohen it was much more than attorney and client." pic.twitter.com/sdldx0kfKQ

Donald Trump in this agreement, he's a third party beneficiary. I know, you're smiling at me, but these are legal concepts. [...] He didn't have an obligation, and if you understand, and you do somewhat, you understand the structure of the Trump Org and Michael Cohen's role in there. It was much more than attorney and client.

Stop talking, Boychik! For the love of God!

SCHWARTZ: Because he's that close to him, he had great latitude to handle these matters.

BURNETT: So they happened with such frequency that you wouldn't need to tell him about a $130,000 payment?

Aaaaaand, he's still out there disgracing the legal profession this morning.

“Of course he didn’t order it.” Michael Cohen's attorney, David Schwartz, says in response to question asking if Cohen ordered alleged threat against Stormy Daniels in a Las Vegas parking lot in 2011 pic.twitter.com/KkkuLvD6OW

See, it's crazy to suggest that Michael Cohen would send someone to threaten Stormy Daniels, because he's a thug who threatens people directly.

I did ask him, okay. He never ordered a threat. He doesn't do that... Because he does it to someone’s face.

Well, we really didn't think there was a lawyer stupider than Michael Cohen. Turns out we were wrong!