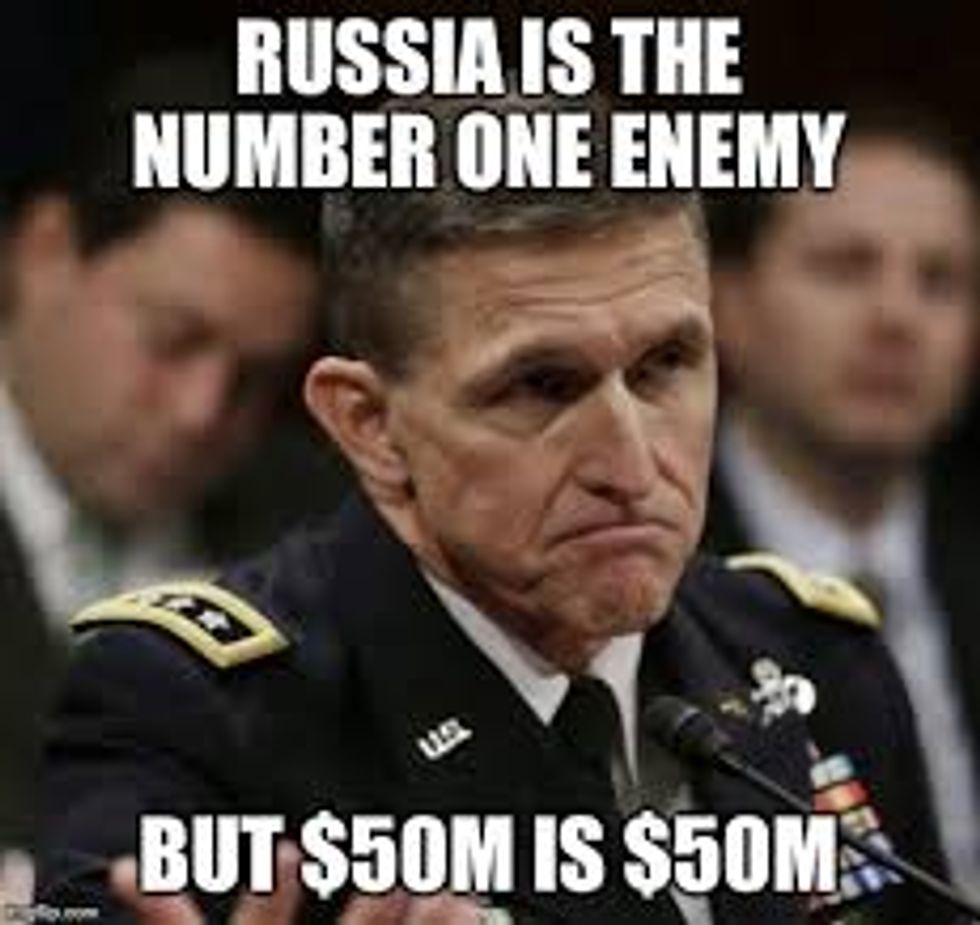 Remember last year when Michael Flynn's Lock Her Up was all over the charts? That guy was bigger than Beyoncé! But now it's spring, and the fickle public has moved on to the next hot young thing, so poor Mike has to put in some extra effort to find a date. He got his bangs highlighted, he's hitting the gym, plus he got a Brazilian wax, PROBABLY. And still, he can't get a date to the prom. Sad!

[wonkbar]<a href="http://www.wonkette.com/614890/senate-intel-committee-tells-michael-flynn-he-may-fuck-off"></a>[/wonkbar]Despite shouting from the rooftops that he is DTF, like RN!!!, he keeps getting bitchbuttoned by the Senate, the FBI and even that little P-hound Devin Nunes.  It's just so unfair! Why can't a disgraced general who's under a major investigative cloud find a date?

Well, if your friends won't tell you, we guess it's up to Wonkette to break it to you. Mike, no one wants to go out with a guy who won't testify without immunity on the first date. You need to lower your standards, buddy!

Mike Flynn should ask for immunity in that this is a witch hunt (excuse for big election loss), by media & Dems, of historic proportion!

Maybe don't be taking legal advice from that guy, though. He thinks immunity means they can't vote you off the island for another week.

I'm not saying he's totally ignorant of law, but Trump's tweet makes much more sense under the reality-show definition of "immunity" pic.twitter.com/djfluKzQdl

Here, maybe if we break it down in a little Lawsplainer ...

The reason we're now talking about immunity is that Michael Flynn has already invoked his 5th Amendment right against self-incrimination. Which is a thing only guilty people do, right? (To be clear, he might not have said, "I PLEADS THE FIFTH, YOUR HONOR!", but in asking for immunity, it's implied that he's taking the 5th.)

There are two types of immunity: Use Immunity and Transactional Immunity.

Under Use Immunity, a witness's testimony cannot be used to convict him in a court of law. But if prosecutors find alternative evidence of the crime, they can use that to convict the witness.

Example: Cletus testifies before Congress that he robbed the Piggly Wiggly and hid the $427 in a bag of Funyuns. The prosecutors cannot go find the Funyun bag in his garage and use it as evidence against him. BUT, if Cletus's accomplice Jebediah has an attack of the guilts and tells the PoPo that he and Cletus done robbed the Piggly Wiggly and the money's in Cletus's garage, then the police can use it as evidence in court to convict Cletus for the robbery.

Under Transactional Immunity, a witness cannot be prosecuted for anything he testifies to.

Example: Cletus testifies before Congress that he robbed the Piggly Wiggly and hid the $427 in a bag of Funyuns. The police arrest his accomplice Jebediah. Jebediah goes to jail. Cletus eats the Funyuns and goes free.

Congress can grant Use Immunity for testimony, but only the Justice Department (which Flynn apparently approached too!) can grant Transactional Immunity which protects the witness from ever being prosecuted for crimes he admits under testimony.

Flynn's lawyers approached the FBI to ask for transactional immunity as regards anything he testifies to before Congress. Presumably, the FBI said something like, "ROFLMAO!!! LOLOLOLOL!!! Dipshit, we already have you. You were stupid enough to commit all your crimes on a recorded phone line. GTFOH."

When he tried get Use Immunity from Congress, he probably received a response along the lines of, "Boy, you are dumber than Nunes! We've already seen the transcripts of your calls. WE HAVE THE RECEIPTS! Now, GTFOH."

This is why Flynn's lawyer Robert Kelner is taking to Twitter to say his client has SOMETHING OMG YOOOOOGE to share with Congress if they will only prettyplease promise not to put him in jail for being a habitual criminal.

A statement by counsel to General Flynn. pic.twitter.com/JQs90OI2OY

Here's a version marked up for accuracy by our friend Mr. Anonymous on Twitter.

The question is what Michael Flynn has got in its pocketses. Can we assume it's something precious? Probably not, per Alex Whiting at Just Security:

So it looks like Flynn won't be testifying any time soon, since no one is willing to grant him immunity. If subpoenaed before Congress, he can just sit there and plead the 5th to all questions. Which is horrible optics for the White House, but is a whole lot better than having him testify against them.

Wonkette is reader-funded, by readers! If you liked this post, click below, to throw us a few bucks!